A lot of my analysis for fantasy football looks at broader scopes: analyzing trends, team composition, draft tendencies, and so on. It’s important to remember, though, that football is a game of individuals coming together to make something happen for a team. People like to say that, “there’s no ‘I’ in ‘team’,” but a team is nothing without the contributions of individuals.

As such, even in a team sport like football, there are moments where we can embrace budding stars and give them their moment in the limelight. One of those moments is the NFL Draft.

Analyzing the draft class as a whole can actually give us a lot of insights about individual players and their likely draft positions. By using tools like Grinding the Mocks’ Expected Draft Position (EDP) and examining draft history, we can see if player’s draft projections hold up and if their betting markets are worth dipping into.

So, that’s what we’re going to do today. Among defensive players, which draft-position over/unders should we be looking at heading into the 2021 NFL Draft?

Penn State linebacker Micah Parsons has been touted as the top player at his position in the class since well before he even committed to the Nittany Lions out of high school. Per 247Sports’ rankings, Parsons was top five in the recruiting class of 2018 for the better part of three years and had a composite ranking never lower than 99.36%. His talent as an off-ball linebacker and a pass-rusher speaks for itself, and it’s his consistency within his versatility that makes Parsons one of the best prospects in the draft.

Parsons’ EDP value had him as a top-10 lock until February, when it appeared likely that a potential five quarterbacks would be drafted before the 10th overall pick and troubling reports of alleged off-field character issues got publicity, despite having come to light months before. 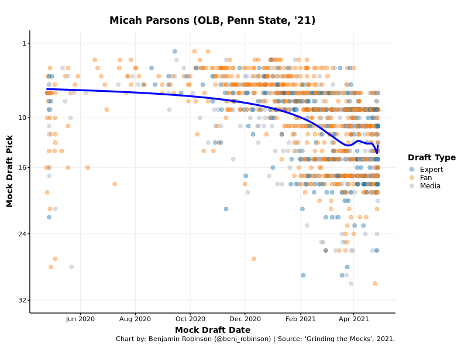 Since then, Parsons has settled into being mocked often to linebacker-needy teams like the Las Vegas Raiders, New England Patriots, or Washington Football Team. He occasionally gets snapped up in mocks as early as to the Denver Broncos ninth overall, however, so it seems like his expected range is from 9th to 19th. The Grinding the Mocks' expert consensus, for what it’s worth, has him ninth.

Historical data shows us that an off-ball linebacker has been selected in the top-12 of the NFL Draft once in each of the last three draft classes. In addition, the factors that correlate best to high draft picks for linebackers are vertical and broad jump (explosiveness), short shuttle (agility), height and weight (size), and tackles for a loss and sacks (big plays/pressure). Those are all qualities the versatile Parsons brings to the table.

If teams aren’t concerned by the reported character issues, this is an easy under bet. With the Broncos, Dallas Cowboys, New York Giants, and Philadelphia Eagles all potentially strong landing spots for Parsons before the 12.5 line break, he has a good chance to beat it.

Miami (FL) defensive end Jaelan Phillips has never been out of the first-round conversation; for a while, though, analysts worried about whether his career injuries would scare teams off from the high-ceilinged pass rusher. Without concussions and his surgery, Phillips would undoubtedly be in consideration for a top-10 pick.

Since February, though, he has surged to being mocked in about the 18th to 24th overall pick range by EDP. The expert consensus has him dropping much lower, potentially, to about 30th overall and the Buffalo Bills. 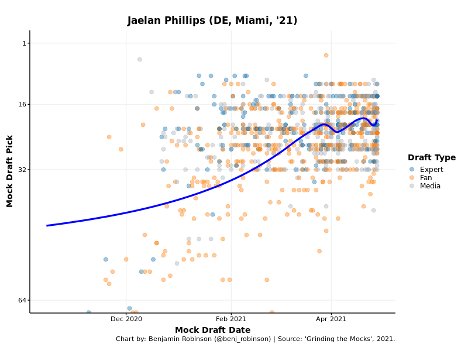 Phillips had a dominant final season in college, flashing the potential he displayed when he was a five-star recruit. The problem with projecting him higher than about pick 14 is there just isn’t a good scheme fit with a team that needs him. At 14, the Minnesota Vikings could be picking and may look his way. After that, though, the Raiders don’t have a huge need and then he passes the 18.5 line pretty soon.

I would look to take the over on 18.5 for Phillips and expect that a team that wants him badly enough will either be in the bottom of the round or trade up to there to get him.

Virginia Tech cornerback Caleb Farley is a tough projection, also due to injury. A severe knee injury and a recurrence of back injuries has made him a dicey proposition for projecting forward, especially in a draft season where NFL teams have had trouble getting prospect medical evaluations. When on the field, he is one of the best playmaking defensive backs in the class and should be in consideration for the top corner spot in the class. As is, though, some have worried Farley might not even make the first round at all. 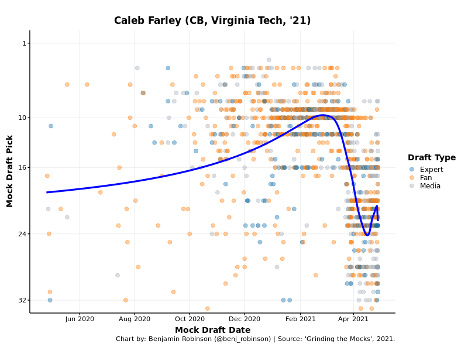 The mocks don’t show that, though. The EDP for Farley has remained steadfast above the 24th pick even when his medicals nosedived his draft stock. The New Orleans Saints have even been rumored to be asking about trading up from 28th overall for the Hokies' star, and so he might end up going higher than expected. The expert consensus sends him to the Arizona Cardinals at 16th, and that’s about where I expect him to come off the board, too.

This line seems to price in the fear of failed medicals and a crowded first round, but I wouldn’t be swayed by it. Farley is going well under this on draft day.

Another compelling late riser, Eric Stokes from Georgia has had an interesting ride over the last two months and is now on the cusp of the first round. Grinding the Mocks’ EDP puts him exactly at 38th overall, just a hair over the 38.5 line on FanDuel Sportsbook, though in late March he was closer to the bottom of the second round. 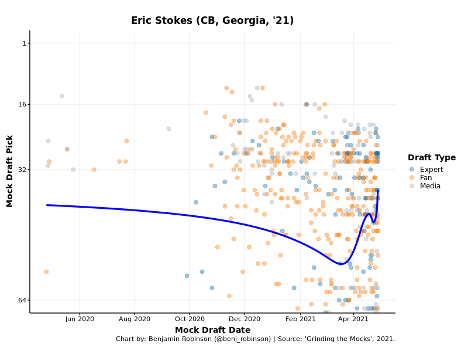 Historical correlation data tells us that speed is king for corners, and arm length and catch radius are important, as well. Pass disruption rate (the percent of team plays where a player earned a pass defended or interception) is the only important stat when looking at which defensive backs will be drafted high.

Stokes earned a 96th percentile speed score (weight-adjusted forty-yard dash) and 80th percentile burst score (weight adjusted broad and vertical jumps) but clocked in with just a 36th percentile agility score (height and weight adjusted shuttle and three-cone). He didn’t snag an interception in college until this year, but Stokes came away with four and totaled a reasonable-but-not-immense 26 passes disrupted across 36 games over the last three seasons.

It seems unlikely that he makes it into the first round, but the Green Bay Packers are a believable landing spot at 29th overall if other options go earlier. Otherwise, to beat the line of 37.5, Stokes would have to be selected by any of the non-Miami Dolphins teams in the top-five picks of the second round. The top-40 picks are very cramped right now, as is the title of CB5 in this draft class -- which Stokes would almost certainly be if he is drafted at pick 37 or higher.

With Stokes' late rise and good-not-great production, I have to shade toward the over.

Covering the Spread: Weighing Evaluation Versus Reporting When Betting the NFL Draft With Dr. Eric Eager