Welcome to the weekly Yahoo NFL DFS Primer! This will be a weekly piece where I analyze high-dollar and value plays at each position across Yahoo’s NFL main slate. The focus will be on both tournament and cash game options as we try to unlock slate-breaking upside in Yahoo's unique DFS game.

Update: The Kansas City Chiefs and New England Patriots game has been postponed and is expected to be played on Monday or Tuesday. Cam Newton has tested positive for COVID-19 and will not play this week.

Last week was a tough one out in the Yahoo DFS recommendation streets. The plays that were in the definitive smash spots didn't quite get there -- Miles Sanders, Amari Cooper, Mitchell Trubisky. Others were more tournament-focused plays that just didn't justify their salaries after previous big weeks -- namely Ryan Tannehill and Darren Waller. Others were just plain bad luck, such as Diontae Johnson leaving early with a concussion.

Moving forward, I will be adjusting my process to weight difficult matchups slightly more. In the early weeks of the season, it seemed offenses were light years ahead of defenses in terms of being in sync, so I have been willing to overlook tough-on-paper matchups. But this week, teams like the New England Patriots, Kansas City Chiefs, and the San Francisco 49ers looked they had developed dedicated defensive schemes aimed at stopping key parts of opposing offenses.

The numbers match up with the tape here...

KC played Zero-Man (blitz with no safety help) on 28.6% of defensive snaps.

If defenses are to the point where they are making adjustments that can stop the best players in the game, we need to start taking matchups more seriously and that will be a greater part of my research moving forward.

Update: The Kansas City Chiefs and New England Patriots game has been postponed and is expected to be played on Monday or Tuesday. Cam Newton has tested positive for COVID-19 and will not play this week.

Deshaun Watson ($30) - The road to fantasy points get much smoother in Week 4 for the Houston Texans and Watson. I don't know if you could have scripted a more brutal opening schedule than to play potentially the three best teams in the AFC (Chiefs, Ravens, Steelers) in back-to-back-to-back weeks.

Priced $10-$12 below the stud quarterbacks of the week, Watson must be licking his chops to finally face a defense that is exploitable and vulnerable.

The Vikings have allowed the third-most passing yards of any team through three weeks plus five touchdowns. The only reason they don't allow more than their average of 17.8 points per game to quarterbacks is that Aaron Jones, Jonathan Taylor, and Derrick Henry have also chewed them up in the ground game.

In a span of only a few weeks, the Vikings' defense has become one of the worst in the league, where they also rank 31st in the league in sack rate. Even a Texans offensive line in shambles should be able to allow time for Watson to work his magic this week.

Joe Burrow ($27) - Through three weeks of the season, a surprising name has made its way into the top ten fantasy quarterbacks (courtesy of NFL.com). 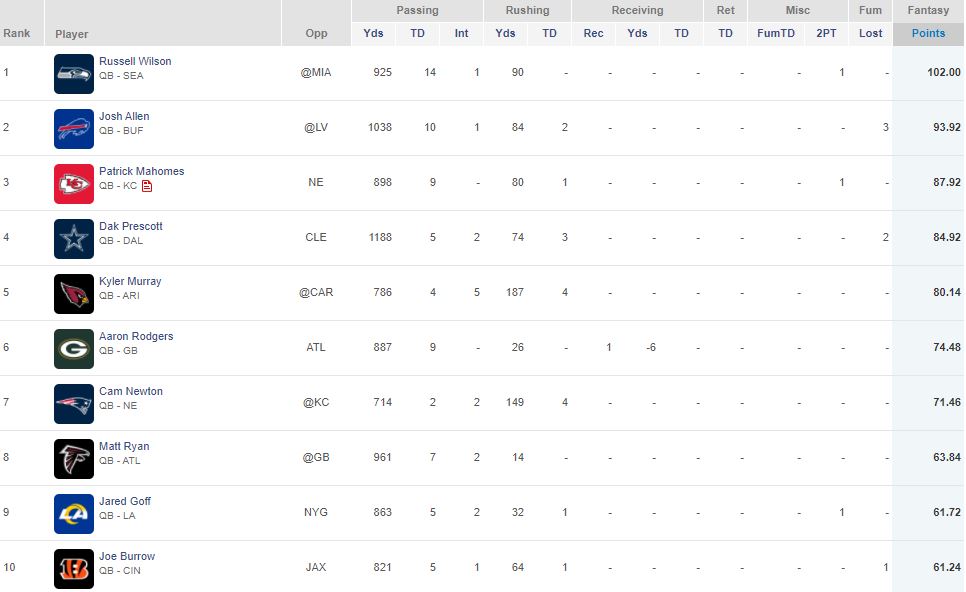 That's right, no Lamar Jackson, Tom Brady, or Watson. Burrow finds himself just a couple of points worse than Matt Ryan thanks to accumulating the most drop-backs in the league (161), the second-most air yards (1,172), and the ninth-most passing yards (821) so far this year.

The Cincinnati Bengals can't be anything but thrilled with their first overall pick and franchise quarterback through his first three games. He now faces the Jacksonville Jaguars, who allow the sixth-most fantasy points to quarterbacks this season and have allowed the worst passing net expected points (NEP) per play rate in the league (0.40 points per play).

Dalvin Cook ($32) - At the high-end of the running back position, this was a toss-up for me between Cook and Alvin Kamara. While they both have incredible match-ups this week, the $4 discount on Cook was the one thing that tipped the scales in his favor.

The Texans' rush defense has just been atrocious through three games, allowing 188.3 yards per contest on the ground, contrasted with the fact that they allow the third-fewest passing yards per game (217.3). How can that be? Because teams realize they don't have to pass the ball to beat the Texans. Run it down their throats, limit turnovers, and maintain time of possession.

And now the Texans actually face a truly great running back in Cook.

Dalvin Cook gained +105 rushing yards over expected in Week 3, the 2nd-most by any running back in a game over the last two seasons.

David Johnson ($17) - As mentioned above, the Vikings are also getting manhandled by opposing running games, allowing the fifth-most rushing yards and third-most touchdowns to the position through three weeks.

Johnson has faced three of the top rushing defenses in the league through Week 3, leading to only 134 rushing yards and 71 yards on the season. Underneath the hood, however, Johnson owns a 93% snap share on the season, second in the league, including 95% each of the last two weeks with Duke Johnson out with an injury.

Johnson is a cheap, game script-proof back this week who should finally be unleashed with a soft match-up.

Tyler Lockett ($25) - Box score chasing? Perhaps, but there are several things that make Lockett a top play again this week separated from his monster game in Week 3.

Typically in DFS when a player goes bonkers like Lockett did last week, they are going to see a price hike as the DFS site hedges against the fact that the player might have set a new baseline for productivity and to make managers really think about rostering that player because of the higher price tag. Lockett's price hike on Yahoo after last week? Zero dollars.

This is quite the opportunity to take advantage of a #1 wide receiver (or at least #1A) on the best passing team in the league at a price that only puts him as the ninth-most expensive to roster. A matchup against the flailing Miami Dolphins doesn't hurt things either.

The Dolphins have allowed the seventh-most receptions and yards to the wide receiver position, and have run lucky to only have allowed the 13th most touchdowns so far -- primarily on the back of whatever it was Gardner Minshew was trying to do last Thursday night.

The Seattle Seahawks continue to pass on about 60% of their plays this year (up from 54% last year) and have become the top team in the league in terms of passing in neutral situations.

Load up and Lockett and don't worry about how popular he is.


Zach Pascal ($10) - On Yahoo, there are always plenty of wide receivers listed at the minimum price who project to have a healthy share of the passing game volume.

This week, the wheel lands on Pascal, who looks to maintain a strong target share against the Chicago Bears with Michael Pittman Jr. and Parris Campbell both out long-term with injuries and T.Y. Hilton disappearing for long stretches so far this year.

Pascal's snap share in Week 1 was 62% and has risen all the way to 93% in Week 3, when he led the team in targets, air yards, share of air yards, and average depth of target (aDOT). For a minimum-priced dart throw, bet on Pascal if you think his game stays competitive and Philip Rivers is forced to air the ball out throughout the game.

T.J. Hockenson ($18) - One of the trends that has stuck out in the first three weeks of the season is just how bad the New Orleans Saints have been against the tight end position. Next up on the schedule? T-Hock.

Hockenson -- despite leading the team in targets on Sunday -- was vultured by Jesse James for a touchdown against the Arizona Cardinals, which, combined with his four receptions for 53 yards, would have made him a DFS stud in Week 3.

He should have no problem reaching those numbers on Sunday, and our projections peg him as a top-five option at the position.