Comparisons make complex situations so much easier for people to comprehend. Of course, you lose some nuance when one shorthands, but a “comp” can be like a gateway drug to understanding.

You just found a new favorite British TV show that features comedians doing weird activities and scoring arbitrary points? It’s like Whose Line Is It Anyway? plus The Amazing Race. You just heard an incredible new musical artist with vocal range from operatic to grunge-growling, clever and thoughtful writing, and extremely catchy hooks in her backing music? She’s like an alto Ariana Grande meets goth André 3000. Do those perfectly describe Taskmaster or Billie Eilish, respectively? No, absolutely not. But they quickly communicate an idea, and that’s what is important.

That’s why I think it’s perfectly reasonable when people use Austin Ekeler as a comparison for Indianapolis Colts running back Nyheim Hines in 2020.

Despite primarily being the receiving complement for a few years, Ekeler still had prolific fantasy seasons, thanks to quarterback Philip Rivers, whose propensity to pass to running backs is legendary. Now that Hines -- the pass-catching specialist in Indy -- has Rivers under center, many believe he is the heir to Ekeler's role.

After a Week 1 showing where Hines racked up eight targets and also garnered short-yardage work, is this comparison coming true? Is Nyheim Hines the 2020 version of Austin Ekeler?

Rollin’ On With Rivers

The per-game production rates for Ekeler and Hines in their careers prior to their age-24 and third season in the NFL are remarkably similar.

Hines has seen a little less rushing work and a bit more receiving usage than Ekeler did at this point in his career, but otherwise they’re spot-on.

When we look at Year 3, then, things get downright uncanny. The Colts used Hines in a varied and significant way in Week 1, but the majority of the time, he was doing what he does best: receiving.

Rivers force-fed Hines 8 targets, the most on the team, for a team target share of 17.4%. Per Pro Football Focus (PFF), Hines even ran 28 pass routes, which was tied for the fourth-most among running backs; only fantasy stars Christian McCaffrey, David Johnson, Saquon Barkley, and Ezekiel Elliott tied or surpassed him.

I doubt Hines sees the 125-plus targets he’s “on-pace” for this year, so those chances will surely drop back to a more reasonable rate. Still, we’ve seen him surpass 80 targets before, and this auspicious beginning seems eerily like the 100-plus target season that Ekeler compiled in 2019.

The caveat, of course, is this is a one-game sample for Hines and we shouldn’t overreact to it. That said, this holds up pretty darn well. Ekeler himself posted a 28.7% target rate (percent of pass routes resulting in a target) in his third year; Hines’s in Week 1 was 28.5%. This not only compares favorably to Ekeler but also the usage that some of the top wide receivers in the NFL see on a weekly basis.

All of this is mainly because Philip Rivers loves to throw to his running backs. The graph below shows the percentage of team targets going to the running back in Rivers-led offenses versus the league average over the last three years. 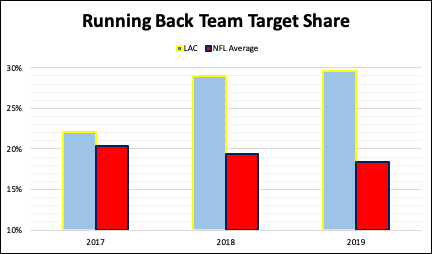 In total, the Los Angeles Chargers under Rivers targeted their running backs as a percentage of team targets at nearly double the rate of the median NFL team since 2017. With this kind of precedent, Hines’ passing-game usage looks likely to buoy him into serious fantasy relevance even if his rushing workload is less than Ekeler’s was.

Along with work through the air, the other most valuable part of a fantasy running back’s value comes from their opportunities in the red zone -- specifically near the goal line. Despite a diminutive 5-foot-9, 200-pound frame, Hines was surprisingly one of 16 running backs in Week 1 to see at least 3 opportunities within the opponent’s 10-yard line.

To be clear, Hines was among the least-effective of those. He rushed twice and was targeted once, picking up just three yards on the ground but eight and a score through the air. By our Net Expected Points (NEP) model, though, that equated to just -0.15 Total NEP -- the fourth-lowest mark in the group. His 33% success rate (the percent of plays gaining positive NEP) was also tied for third-lowest among his peers in this situation.

Still, he was the only Colts running back to see multiple goal-to-go opportunities. In teammate Jonathan Taylor’s lone goal-line rush, also, he was stopped for no gain and -0.47 Rushing NEP.

I don’t think there’s much argument that Hines should remain the team’s primary goal-line back, but if he does, this is a major boon for his fantasy value. This is a slight diversion from his comparison to Ekeler, however.

Despite Ekeler’s major all-around workload, he only saw 17 opportunities within the 10-yard line last season. Hines, obviously, is currently on-pace for 48 such chances, and even if he only sees one goal-to-go chance per game from this point forward, he will still surpass Ekeler’s 2019 mark.

That said, Ekeler was also not extremely successful as a goal-line back. He did score 5 times on those chances but rallied for just 21 yards on 17 tries, good for -0.10 Total NEP per play (sixth-lowest among 25 backs to see 15 goal-line opportunities or more).

Just getting enough chances at the doorstep of a touchdown means a running back can fall into six points sometimes, and Hines is currently seeing a workload (albeit unsustainable) that would add highly to his all-around fantasy profile.

As for competition for these highly valuable chances, 2020 starter Marlon Mack is out of the picture for the season with a torn Achilles tendon. All that leaves behind Hines is 2018 fifth-rounder Jordan Wilkins, who -- while he has been very efficient in low dosage -- doesn’t profile as a receiving threat.

You all must be screaming at your computers right now that I have barely mentioned 2020 second-rounder Jonathan Taylor, and you’d be right to. He’s very good and does have a profile that could be an all-around bellcow back. He should be the “1A” now in the Colts’ backfield, and he may end up with just as many or more touches as Hines by the end of this campaign. He in fact equaled Hines in opportunities in Week 1, 15 apiece.

Still, it’s worth noting that every one of Taylor’s opportunities came after Mack was injured. By the midway point of the second quarter, when Mack went down, Hines already had 34 yards from scrimmage and a score on 6 touches.

The point: all this indicates that Hines will remain an integral part of the offense, no matter what. The modern NFL backfield is a committee made up of a variety of skillsets that are integral to a team’s success. As much as we love Jonathan Taylor’s talent and the opportunity that Marlon Mack’s injury presents to him, Hines has a set of skills that complements the rookie’s as he acquaints himself with the league in an uncommon and uncertain year.

It’s also hard to ignore Hines’ comparison to Ekeler in this offensive scheme: Ekeler was also a 24-year-old, third-year player when he broke out as Rivers’ go-to checkdown outlet, and he was trusted to be utilized in a variety of situations. Hines has the reliability the Indianapolis coaching staff desires and the skillset that Rivers has become comfortable working with.

All he needs now is to keep getting the chances, and a 2020 RB1 finish is well within reach for Indy’s answer to Ekeler.