Sam Hoppen  —  @SamHoppen Aug 21st, 2020
Share on Facebook Share on Twitter
It's a debate that's been swirling for years, so can we actually find out if a large rushing workload in college helps or hurts a running back's NFL production and efficiency?

This offseason, a debate has been swirling among fantasy football dynasty players: does Jonathan Taylor's massive college workload bode well for him or spell doom for his NFL career?

On one side, you have people arguing that Taylor's workload is evidence of his skill and experience as a rusher, proof that he can succeed in the NFL. The other side will argue, however, that his heavy college workload will cause him to break down earlier than an average running back would.

This debate hasn't just happened this year though, as it's one that fantasy managers have been discussing for years (and will inevitably become a point of contention next offseason).

Hopefully this analysis and subsequent results give fantasy managers more facts with which to make informed decisions on draft day about what a big college workload means for incoming NFL running backs.

Before getting into the analysis, I wanted to share my methodology and process for my research. Because of data availability limitations, I could only included running backs that have been drafted since 2011.

Additionally, I used only running backs with at least 50 total college carries and only counted NFL seasons in which that same player had at least 50 rushing attempts so as not to skew efficiency metrics if a player only rushed 15 times. Furthermore, utilizing K-means clustering, I binned players into four categories based on their total college rushes (as you'll see in the efficiency charts).

As another caveat, it is difficult to parse out offensive line talent and the quality of a team's scheme from any running back efficiency metric. So, while these metrics may show a decline in running back efficiency, part of this could be explained by an offensive line getting worse or a team's scheme changing. For the purpose of this exercise, though, we have enough data points that a decent chunk of this noise should be removed.

Regarding my data sources, I used the nflscrapR and cfbscrapR to narrow down which running backs qualify for the study I've done and calculate a couple of my efficiency metrics. Additionally, I used Pro-Football-Reference's draft history to calculate career years and used some ProFootballFocus rushing efficiency metrics to round out my research.

This chart plots total college carries against total NFL carries to see if there's any relationship between the two. 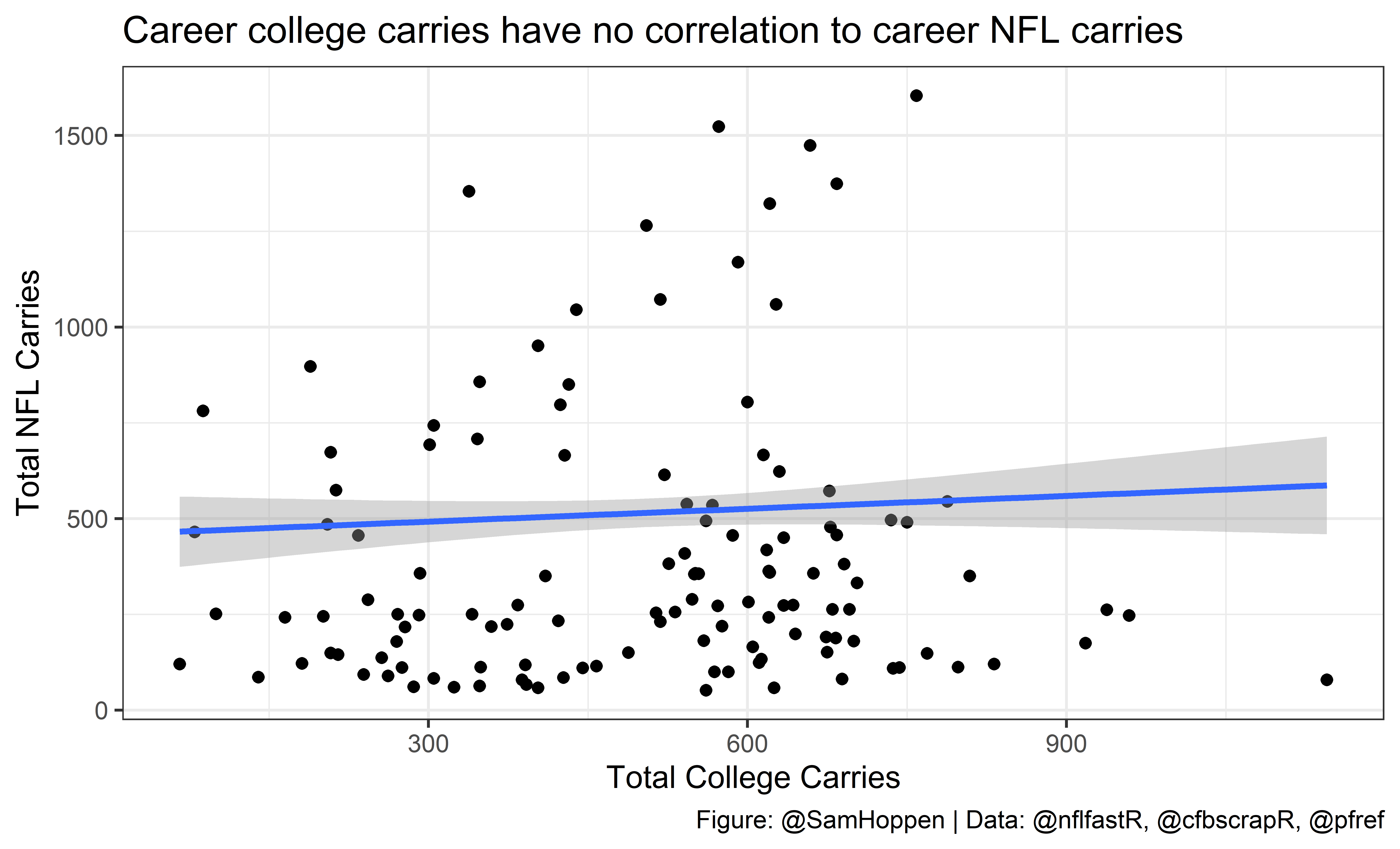 Based on this, it's clear that the two aren't particularly related.

However, this doesn't necessarily tell the full story, as there are several running backs in this data set who have yet to finish their NFL careers. Let's switch to carries per season in the NFL and see if that gives us any different results. Unfortunately, it remains about the same. 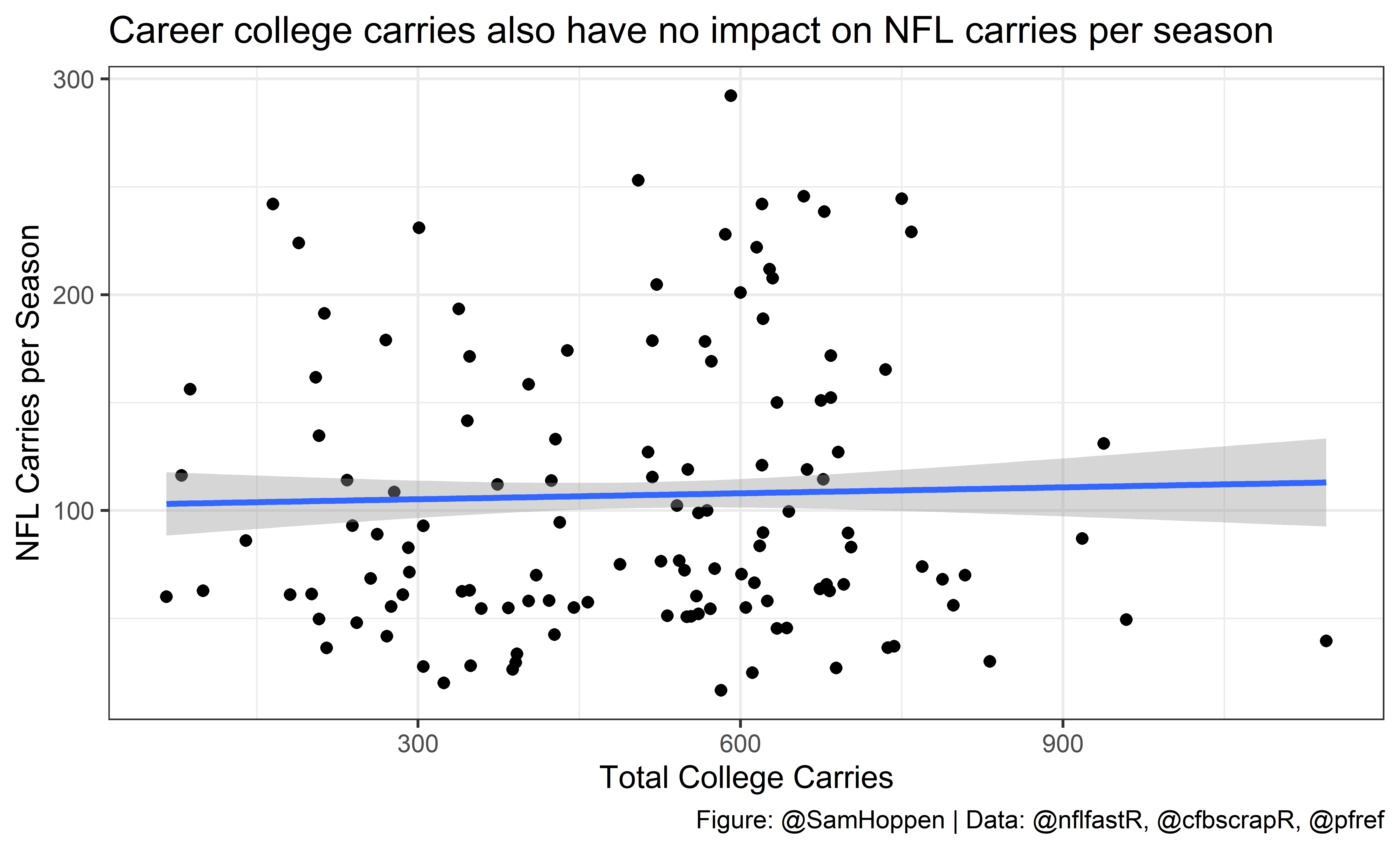 But this is looking at all running backs no matter when they're drafted. It's commonly accepted that running backs taken in the first three rounds have a much higher fantasy football success rate than those taken later in the draft.

Intuitively this makes sense, too, because teams who draft a running back with a Day 1 or Day 2 pick in the draft will be more likely to use them having invested so much draft capital into them.

Does that change things? 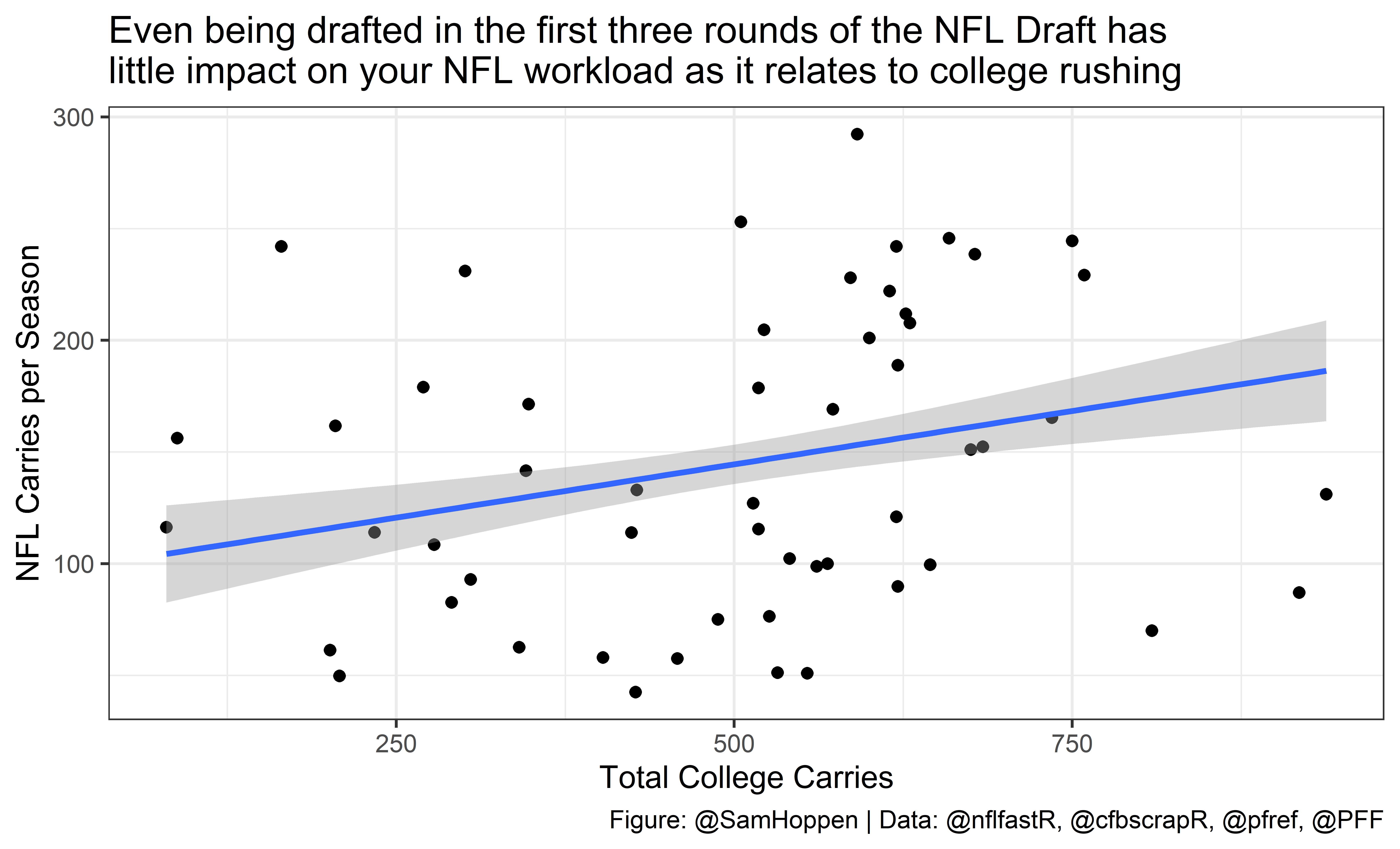 So, when looking only at running backs drafted in the first three rounds, the results change slightly, but not significantly enough to make us think we should evaluate them any different from this perspective.

At this point, we've effectively ruled out the impact that college rushing has on NFL workload. The next step is to take a look at how effective those carries were throughout a running back's career.

There are several ways to look at rushing efficiency, so I did my best to include as many factors as possible in a way that's easily digestible.

As you'll see, I used a box plot for these graphs to see the distribution within each college carry bin more easily while also comparing across those same bins.

Each of these metrics is displayed using a running back's career year on the X-axis so that we can see if there are any trends that occur at specific stage gates of a player's career.

If you're not familiar with what box plots display, the line in the middle of each is the median value while the box itself outlines the range of values from the first quartile to the third quartile. The lines on each end of box show the values outside of those two quartiles and the dots on the chart being major outliers.

With that, let's dig into each of these stats.

The first metric I evaluated is a simple one: yards per carry. I've never been a big fan of yards per carry as an efficiency metric as it doesn't have much predictive power year-over-year. That said, I wanted to start with a stat that is commonplace in rushing analysis and evaluation. 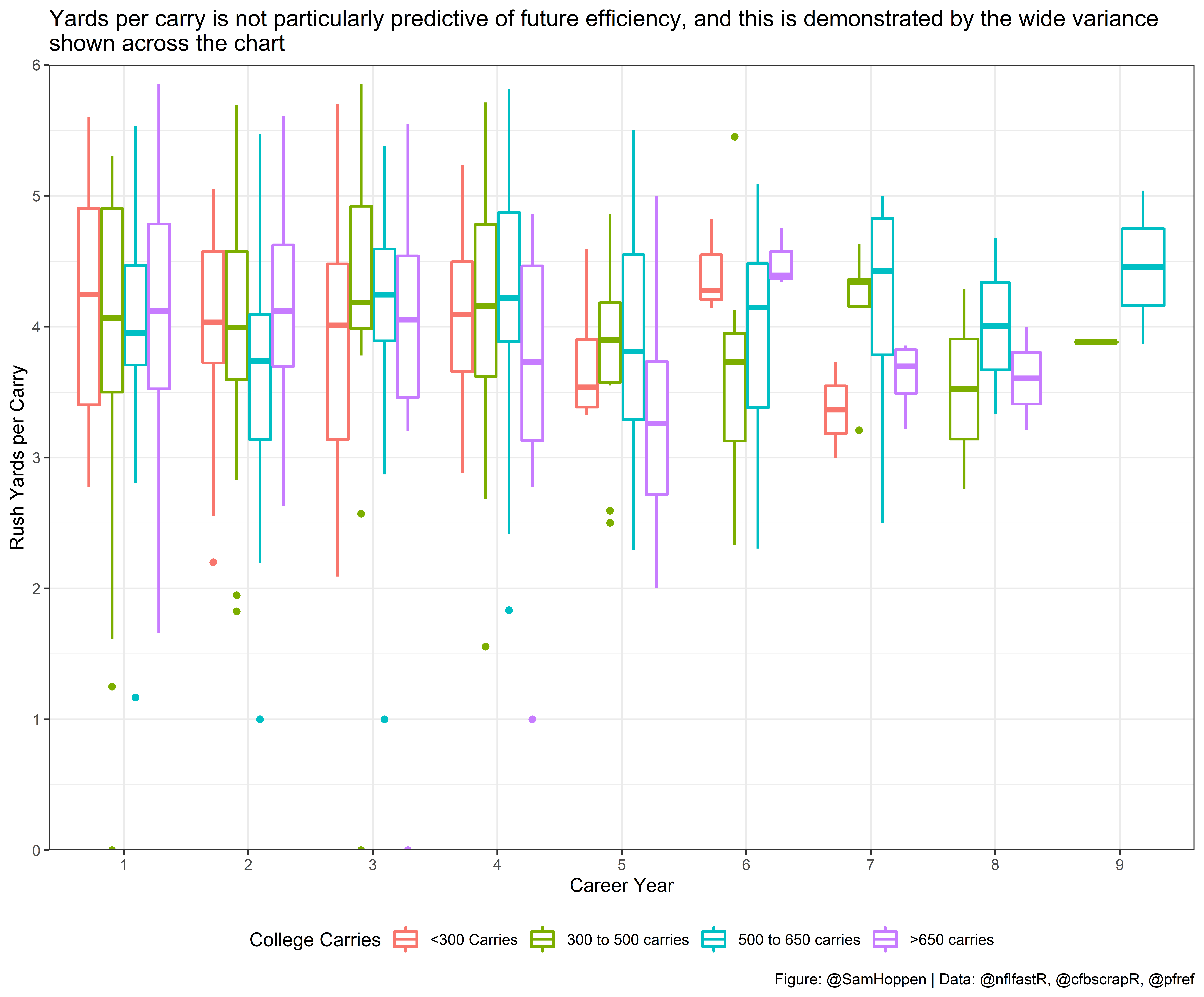 As I expected, this wasn't particularly valuable in getting any insights, so the next metric I looked at was expected points added (EPA) per carry. While EPA isn't necessarily a fantasy-football related stat, it is often used to evaluate overall team and player performance in a vacuum. 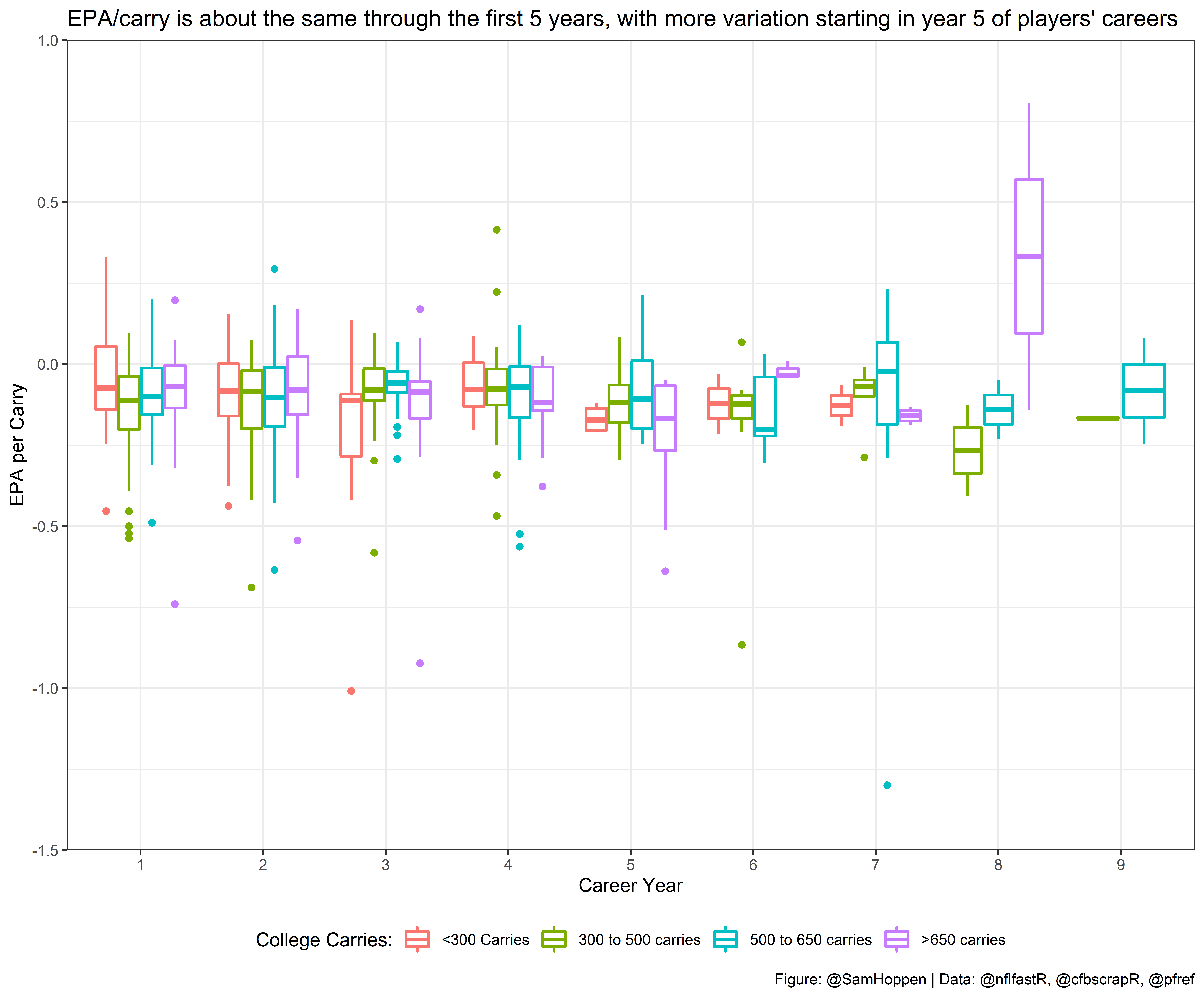 Additionally, PFF's grading system has some level of efficiency baked into it and is well regarded among the football community as a great measure of true player performance. Again, these don't have exceptional relevance to fantasy football but give us a sense of how player performance changes over time. 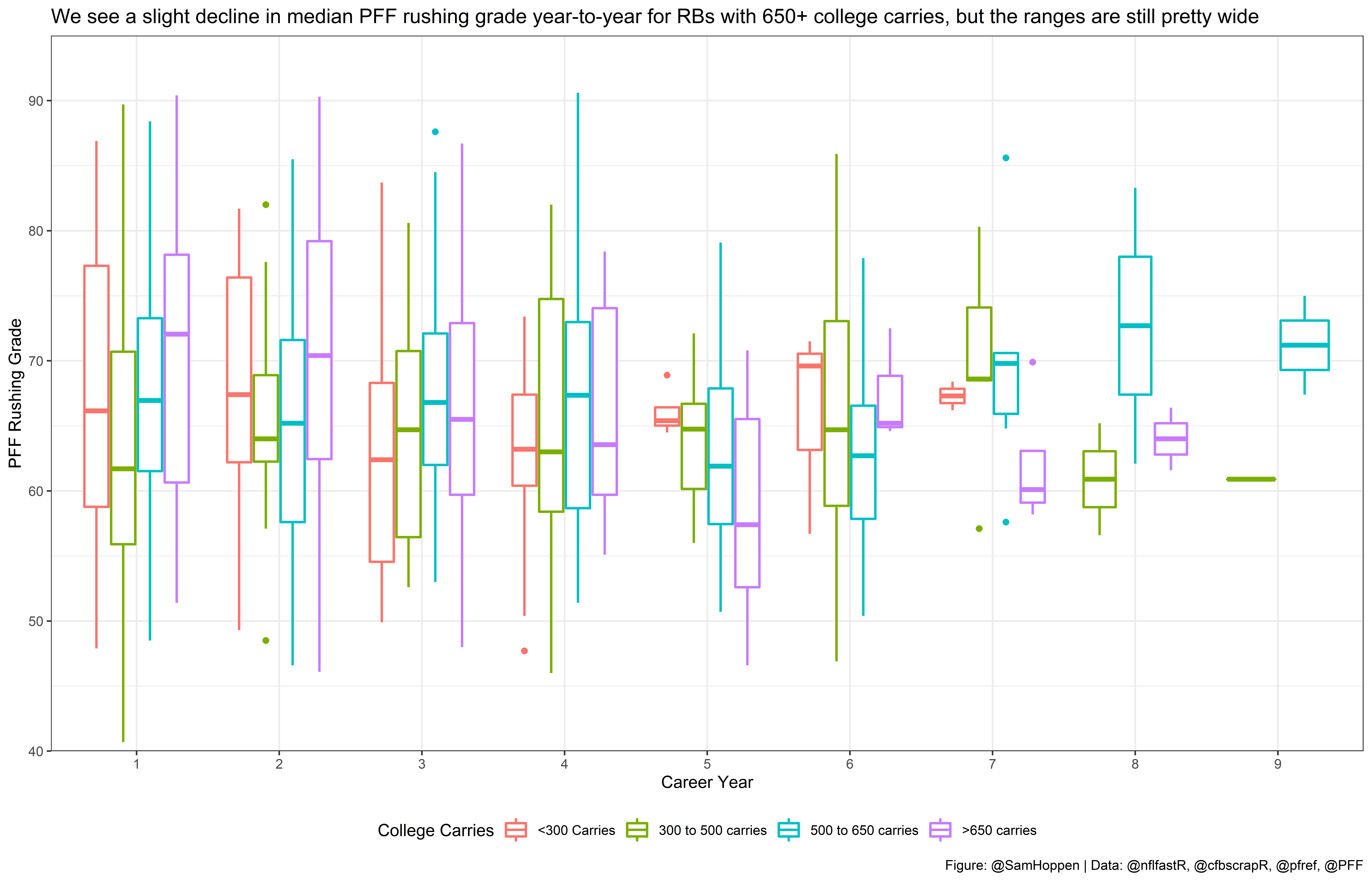 Unfortunately, the variation is so wide across the chart that it's tough to glean any insights from the results. These final two metrics, yards after contact per carry and elusive rating, also come from PFF.

Both of them show similar variance year-to-year but also highlight the same trend: running backs with over 650 college carries have the highest median value for each metric through the first three years of a career. There's a decent drop off in year four, though, before picking back up in years six and seven. 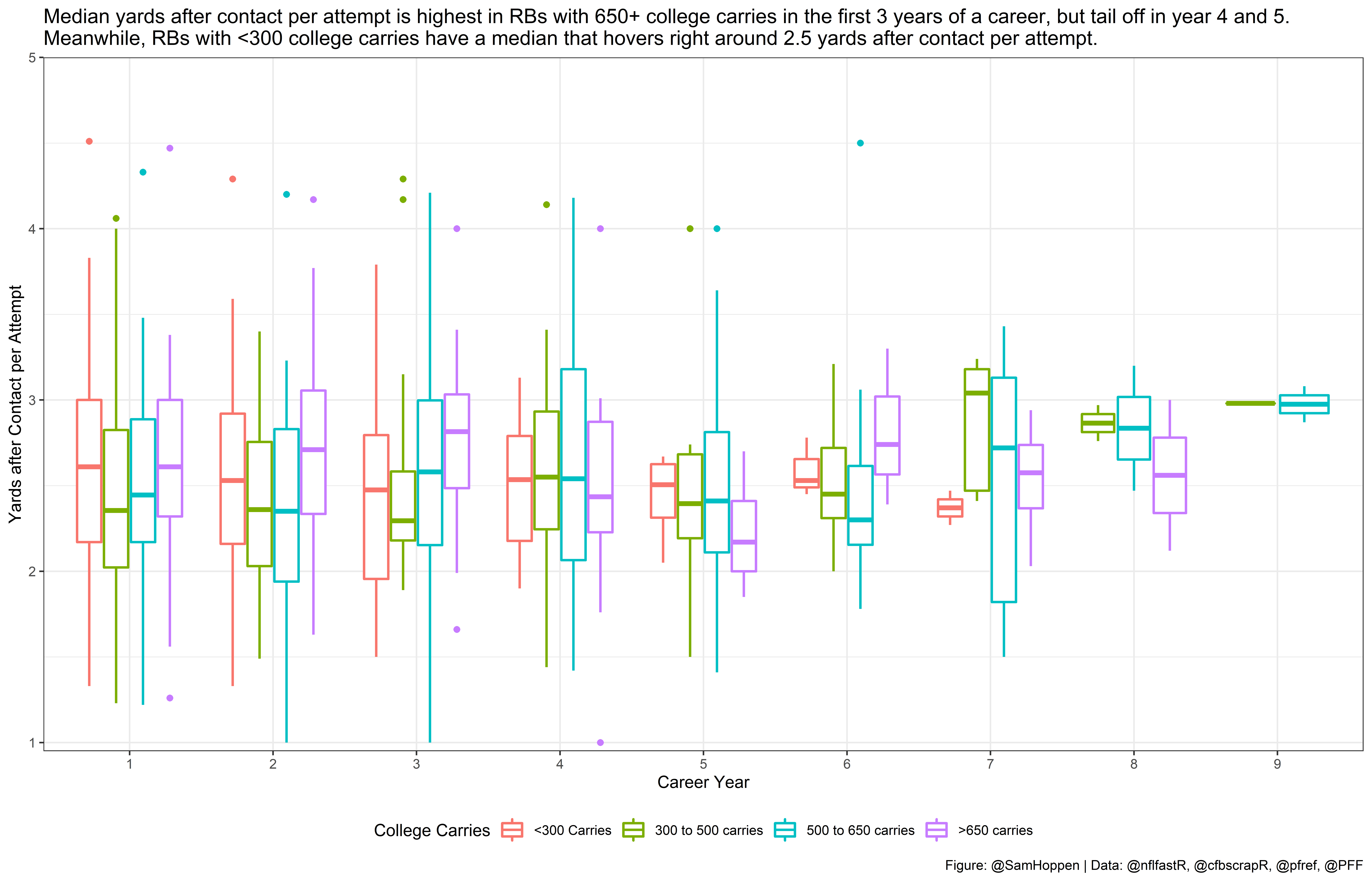 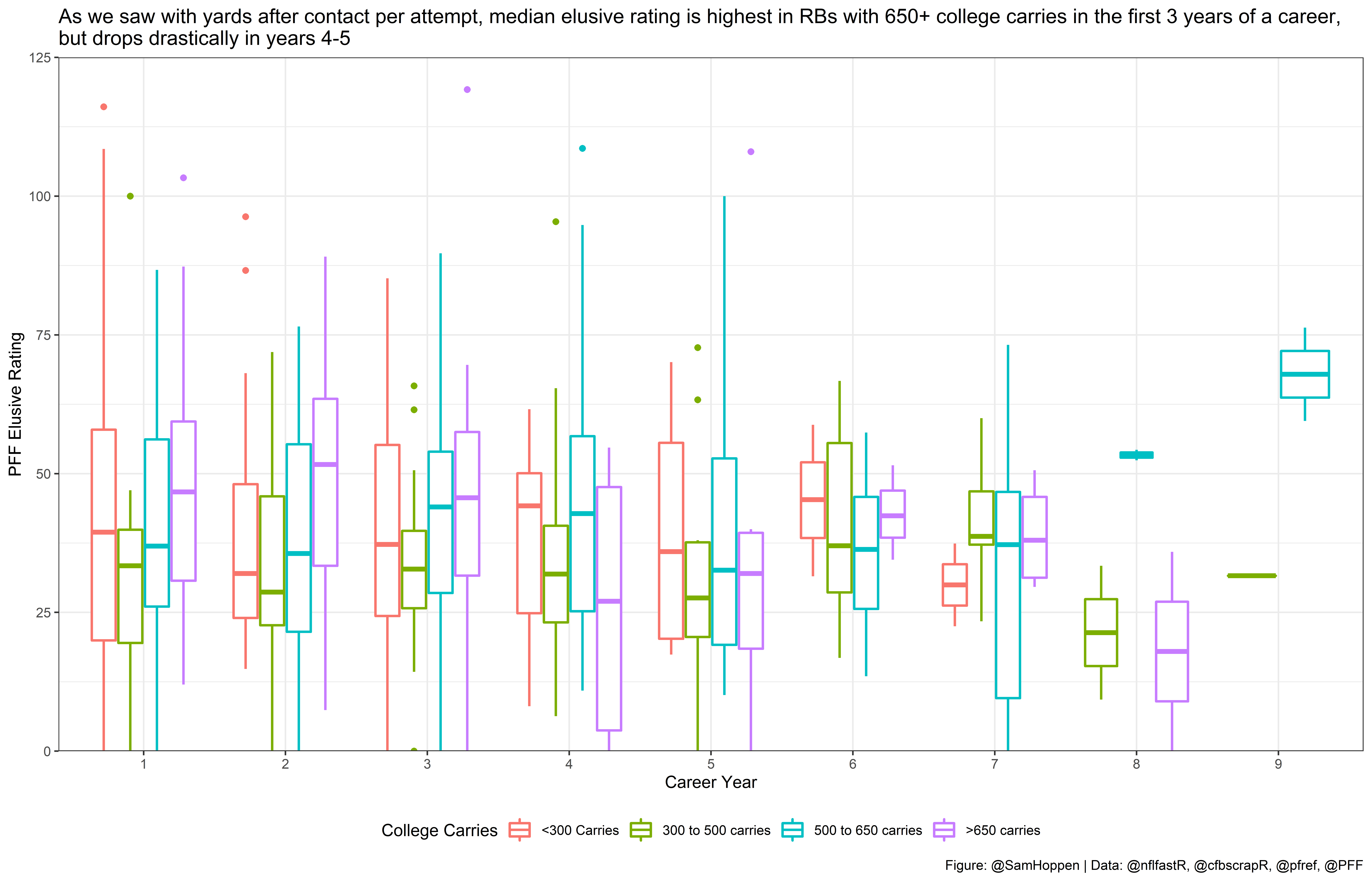 All-in-all, there aren't many major trends across each of these efficiency metrics (aside from the couple I mentioned before) that should make us believe a running back's efficiency should tail off any sooner if they had a larger workload in college.

All the ties to workload and efficiency is fun, but what really matters is how many fantasy points players are scoring, right?

For this final bit of research, I looked at fantasy points per game using half-point-per-reception scoring. 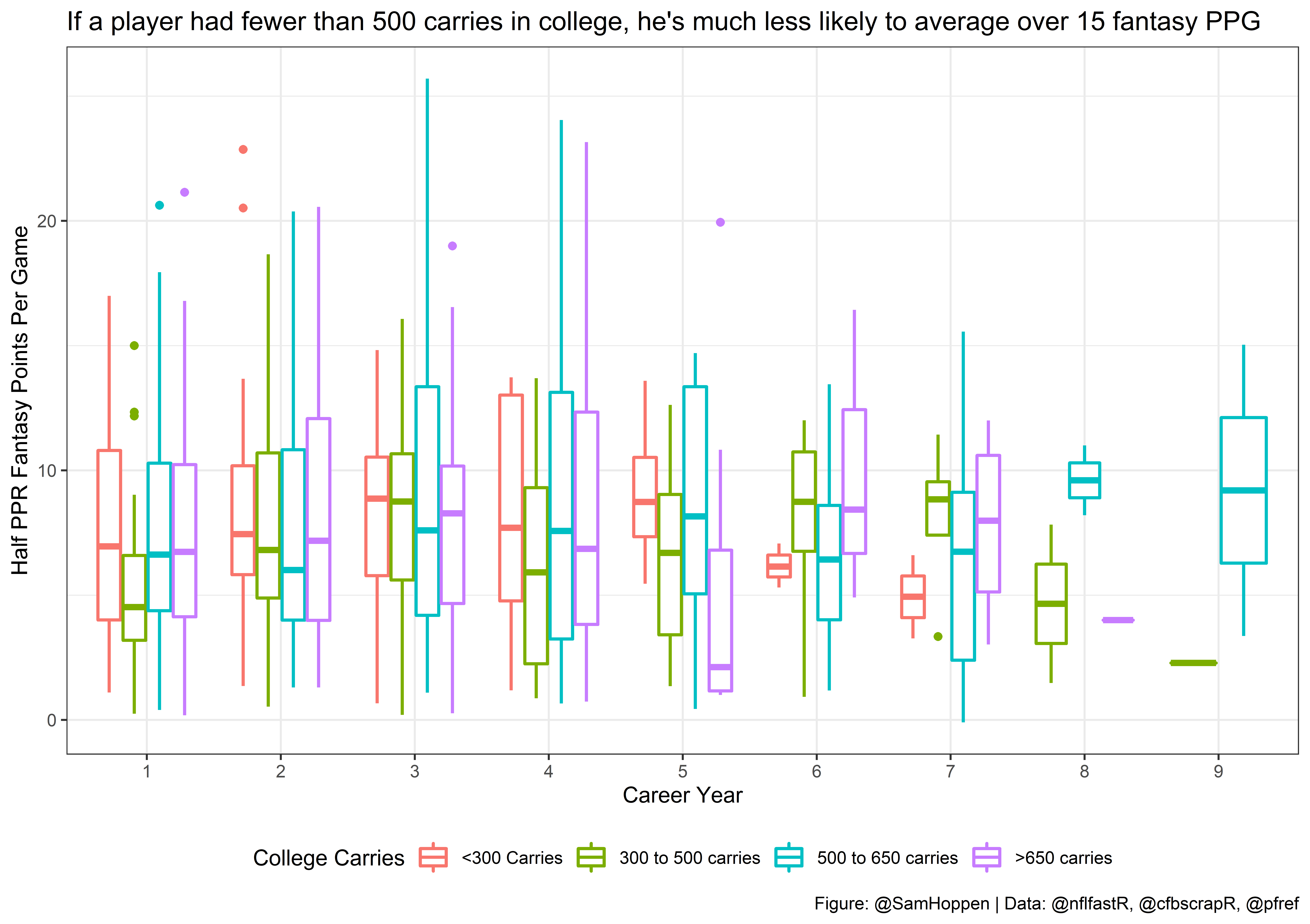 The biggest takeaway here is that players with more than 500 college carries have a decent chance of becoming upper-echelon fantasy football players. You'll notice this if you look at the lines of the blue and purple segments in years two through four. Those lines extending over 20 fantasy points per game demonstrate how some of the most elite players are those who got a large college workload.

As a recap, we've concluded that there's little to no correlation between college workload and any sort of impact on NFL workload or efficiency. So, if you're using college workload as a tiebreaker between drafting two running backs in dynasty, stop. That said, there's still work to be done.

As far as improving this analysis and conducting future research, the biggest gap is threefold. First, as mentioned earlier, the best NFL data I have only goes back to 2011. I'm comfortable using only data since then because the game has changed so much in the past decade as it relates to running backs (more committees, devalued contracts, etc.). However, going back another decade in the NFL may reveal some different trends that are worth considering.

The second limitation is looking at true durability. For simplicity's sake, I only looked at rushing attempts per season (to account for players who hadn't finished their careers yet). Ideally, we could get a better lens into a player's injury history throughout his career. Specifically, answers to questions like how many injuries do backs with high college rushing workloads sustain throughout their career, what types of injuries do they sustain, if they are more susceptible to injuries could provide great insights.

Finally, the analysis I've done only looks at efficiency and workload as it relates to rushing and doesn't account for any receiving work. We've seen plenty of NFL backs become fantasy-relevant options due to their pass-catching prowess (e.g. James White and Tarik Cohen) and not having a large workload as a rusher.

If you've made it this far, I thank you for making it all the way through and hope you learned something that will help you in your future fantasy football decisions.