The Smash and Grab: 6 Teams With Elite Hitting Opportunities in Week 8

As a Houston Texans fan since the inception of the franchise, I can pinpoint and time, place, and my specific reaction when I heard the news that DeAndre Hopkins had been traded to the Arizona Cardinals for David Johnson, a second-, and fourth-round pick.

But as the dust has settled and the Texans are coming to terms with what is left on their wide receiver depth chart, one thing is certain -- if Will Fuller is healthy for the duration of 2020 (granted, a Texas-sized "if"), he is the clear alpha on this team and fantasy owners can expect plenty of "Fuller House" calls from the Fuller and Deshaun Watson connection this season.

Currently sitting at WR36 and 87th overall on FantasyPros' average draft position, Fuller is projected like he will play an inconsistent number of games with the inconsistent production he has given his fantasy owners during his tenure in the NFL. But with the target hog Hopkins out of the way, health is the only thing standing in the way of Fuller flying past his projections of a back-end WR3.

Until he can prove otherwise, the elephant in the room with Fuller will always be his health. Over his four seasons, Fuller has averaged 10.5 games played per year. He has dealt with broken collarbones, a torn ACL, groin surgery, problems with sports hernias, and more in a relatively short career.

At present, the Texans are "encouraged" by Fuller's recovery from core surgery and plan to have him full speed by the start of the regular season. I'm not sure I am overwhelmingly encouraged by their encouragement, and it's something that affects my entire outlook. If he is not 100% to start the season, I am out.

However, whether or not we believe health is a skill, Fuller must find a way to attain more of it if he is ever to live up to his draft capital -- he was taken with the 21st overall pick in the 2016 draft. Since we can't reliably predict health, I will proceed as though he is on the field until information proves otherwise.

You're in Big Trouble, Mister

When on the field, it's not a debate whether or not Fuller has been a problem for opposing defenses. Coming out of Notre Dame, Fuller put up a 99th percentile 40-yard dash time and an 83rd percentile speed score. He is a burner, plain and simple. At 6'0" and 186 pounds, he has the size and speed combination that gives opposing defenses nightmares.

Fuller's presence on the field helps the Texans in all aspects of their offense. Head coach Bill O'Brien often talks about how when Fuller lines up outside, it pushes the defensive backs and safeties farther upfield and towards his position, which opens up play-action and the run game by putting fewer defenders near the box.

Considering Fuller saw the 19th-most deep targets in the league last season despite only playing 11 games, the Texans' opponents know that when Fuller is targeted, it will be deep. With few defensive backs able to match his speed, over-the-top safety help is almost a requirement.

It might be natural to think that Fuller, who saw those buckets of deep targets and ranked 18th in the NFL in yards per target, might be a low-efficiency receiver because of the nature of his game.

Not so fast, my friend.

Watson at quarterback has been the gift keeps on giving for Fuller in their time together. Last season, Fuller saw the fourth-best target quality rating in the NFL, according to PlayerProfiler. Target Quality Rating puts a premium on catchable deep targets and average depth of target, so in this regard, Fuller stands out even among those who are the best deep-ball receivers in the league.

On his targets last season, Fuller pulled in 69% overall, good for 16th-best in the league. In fact, among all wideouts with at least 50 targets, Fuller ranked seventh in Target Success Rate (i.e., the percentage of targets leading to increases in Net Expected Points (NEP)).

Fuller excels on the deep ball on either side of the field. Sharp Football looks at success rate over average (or how receivers perform at different levels of the field of play) -- as is seen below, Fuller is well above-average whether running left or right deep routes. 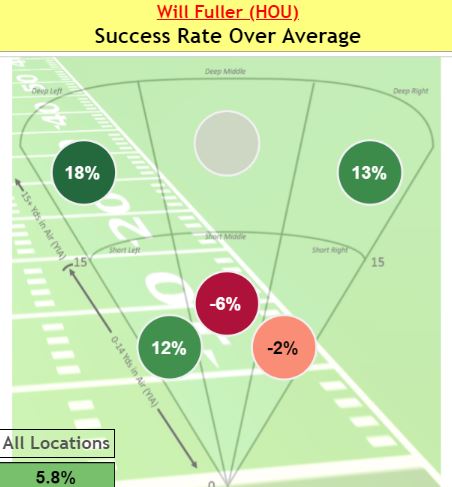 Fuller is also well above-average in short passes to the left side, while slightly below-average on the right side and in the middle of the field.

With a potent combination of crisp deep routes, an accurate quarterback, and an average target distance of 14.8 yards, Fuller has the tools to dominate against almost any defensive assignment he sees in 2020.

For the upcoming season, numberFire's projections place Fuller at WR33 with 63 receptions, 812 receiving yards, and 5 touchdowns. While certainly within the realm of possibility, these are clearly "Fuller misses a certain number of games" projections.

If he can buck that trend, the sky's the limit. Drafters are starting to take note as the 2020 season approaches. According to Fantasy Football Calculator, Fuller's ADP has risen by more than a half-round just since the middle of July.

With Hopkins' 150 annual targets out of the way, new receivers Randall Cobb and Brandin Cooks (both injury risks themselves) can't absorb them all. Look for Fuller, health permitting, to soar to career-highs in targets, receptions, and touchdowns in 2020 if he can stay on the field.

As an eighth-round receiver, he is one of the few players remaining at that point in the draft that has the ability to truly dominate a fantasy season. Have mercy.