When J.K. Dobbins was selected by the Baltimore Ravens in the second round of the 2020 NFL Draft, immediate reaction by the fantasy community trended towards what potential effect Dobbins' arrival would have on the team's incumbent starting running back, Mark Ingram. Despite the certainly of Dobbins taking over full-time rushing duties in 2021, drafters should still feel confident selecting Ingram at his current price tag at RB18 and 39th overall, according to FantasyPros' consensus average draft position (ADP).

The fundamental question heading into the new NFL season for the Baltimore Ravens' backfield -- and thus for fantasy players -- is not whether Dobbins is a capable NFL back and ready to step into the lead role but rather that Ingram is capable of holding him off and fighting back Father Time for one more season.

The Ravens can cut Ingram after next season and face zero cap hit, so it will undoubtedly be Dobbins' time in 2021. The Ohio State product was a dominant force in 2019, ranking third among all backs with 1,208 yards after contact, according to Pro Football Focus. He also led college football with 31 carries of more than 15 yards and seemed to produce his biggest performances against the toughest defenses.

However, as Dobbins learns the ways of the NFL and becomes familiar with the complex and dominant Baltimore rushing scheme, Ingram should continue his success from last year when he was an integral part of the best rushing attack the NFL has ever seen.

Even in a season where we saw the fourth-most pass attempts per team ever in the NFL (34.9 per team), the Ravens rewrote the record books in 2019 by smashing the previous marks for total rushing yards and rushing yards per attempt. Baltimore became the third team ever to rush for more than 3,000 yards in one season, finishing with 3,296 -- more than 130 yards over the second place 1978 New England Patriots (3,165).

The Ravens weren't just a volume rushing team, either. Their efficiency was on full display, as well, as they tied the all-time record for yards per attempt at 5.5 per tote. This per carry average allowed Baltimore to break the record for yards in a season while only ranking 19th all-time in total rush attempts for any team. With so many valuable rushing options on the team and a scheme designed be unlike any that has ever been seen before, the Ravens were able to support multiple efficient rushers.

Quarterback Lamar Jackson rushed 176 times for over 1,200 yards (6.9 yards per attempt), and Ingram and backup Gus Edwards both rushed for over 5.0 yards per attempt, each carrying the ball more than 130 times. Since the end of the 2019 season, the offensive playbook has been dissected ad nauseum, but the creative blend of blocking schemes, pre-snap motion, and league-leading play action opened up all sorts of running lanes for Raven rushers.

In 2020, one of either Edwards or Justice Hill will presumably not make the final roster, so Ingram can carry the ball 200-plus times again while still allowing plenty of touches for Jackson and Dobbins even if there is a slight drop-off of total rush attempts.

According to Player Profiler, Ingram was ranked first among all running backs in the NFL in juke rate at 35.2% (juke rate is essentially a metric that determines elusiveness and tackle-breaking ability). He was also number seven in true yards per carry, which takes out runs greater than 10 yards so as to measure consistency among a player's runs.

But it was in the longer runs where Ingram truly stood out from the running back competition. Among backs with at least 150 rush attempts in 2019, Ingram ranked third in terms of the percentage of runs that were for six or more yards, according to Sharp Football. A full 32% of Ingram's carries went for six or more yards, so when you combine a quarterback rushing for almost seven yards per carry and a running back rushing for at least six yards on a third of his carries, it's no wonder the Ravens scored on more than 52% of their drives last season, far and away the best in the NFL (league average was 36%).

Can Ingram remain efficient, though, as he plays in his age 30 season? That, perhaps more than anything, is the question du jour for fantasy owners monitoring the Ravens.

It has long been assumed that age 30 is the year that running backs completely fall off the proverbial cliff. In fact, there is plenty of research that has shown running backs begin to decline around age 27. Ingram has blown past his age-27 season, so we must now consider the age-30 season coming up. I thought I would put that theory to a simple up-to-date test, looking at running backs just from this century.

The problem with including running backs from many decades ago in any analysis is there is nothing that factors in variables like improved health and medical practices, the changing offensive landscape in the NFL, and simple procedural coaching moves like telling a player to get out of bounds instead of absorbing a big blow.

The information below represents all NFL running backs since 2000 with at least 100 carries in a season.

(As this information is revealed, note there are a total of 14 running backs with an age 21 season since 2000, and Ezekiel Elliott's rookie season skews all the data, so keep that in mind. Also, I did not include running backs with ages over 32 as the data points are basically Frank Gore and Adrian Peterson.)

We clearly see here that on a yards per carry basis, ages 22-26 are peak years for a running back (no surprise there), with a slight drop-off from ages 27-30 and then a significant dip in ages 31-32. But there is no real discernible difference between ages 27-30 in this category.

Yards per attempt can be masked by a false sense of how much volume a running back receives, though, so what about yards per game as age increases? 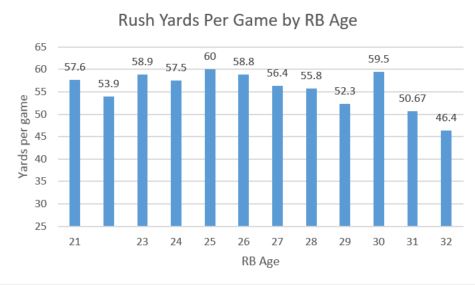 Once I saw this, however, I realized that perhaps 100 carries was too deep a pool to dive into. One hundred carries is essentially six carries per game and any backup can manage that for years and years. If the threshold is raised to 200 attempts per season, what happens? 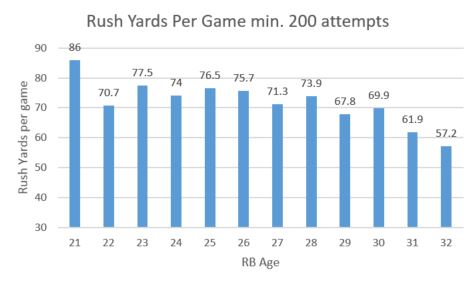 We see Elliott break the curve again here but also notice a similar pattern as above. Peak ages at 23-26 but not elite numbers in ages 27-30, and then another collapse beginning at age 31. It stands to reason, however, that this is what we should notice at a minimum of 200 carries. The best backs at 29 will continue to get a ton of volume at 30, and there is nothing magic about turning 30 that causes any sort of statistical separation.

Ingram will play 15 of 16 games in 2020 at age 30 (turning 31 before the last game of the season), and the Ravens have done the smart thing, which is bring in the heir apparent to their starter and let him be tutored by the veteran. Someday the end will come for Ingram, but there is little reason to think it will be now (assuming no injury), considering the history with 30-year-old workhorses and the team context.

Being one of the smartest teams in the NFL, Baltimore understands that one of the lowest expected value moves a team can make is to sign an old running back to a long or expensive contract. Considering the contract situation, I fully expect the Ravens to give Ingram all he can handle this year, knowing he will be somewhere else by 2021.

Injuries, a split backfield, and general regression after a season never before seen in the NFL will always be concerns as fantasy owners attempt to sort out the Ravens' 2020 backfield. But under the category of "if ain't broke don't fix it," look for the Ravens to try and replicate their offensive success from 2019 and ride Jackson, Ingram, and company deep into the postseason.

Even with an expected drop-off in the the sheer volume of rushing attempts this season, there are more than enough opportunities to carry the ball even if the Ravens lose, say, 20% of their rushing attempts from a year ago. But to hear the Ravens' players talk, they expect MORE rushing in 2020. Ingram will clearly be a part of those plans, and Dobbins may just have to be content with second chair until 2021.

Ingram drafters should have full confidence that he will be given at least the 13.5 rush attempts and 2.0 targets per game he earned last year, as well as sustained goal-line opportunities. It would behoove Ingram drafters, however, to look at picking up Dobbins sometime in rounds 11 or 12 (currently 108th ADP) as a valuable handcuff and a back who might grow into a larger flex-type role as the season unfolds considering how much this team runs.

Age and wear are career-enders that eventually come for everyone, and should Ingram succumb to them at some point in 2020, there will be no better opportunity for a rookie back.