Which Wide Receivers Will Score More Touchdowns in 2020?

A lot of fantasy football success comes down to touchdowns.

Go back and look at historical stat lines either on a weekly basis or on a year-long basis. The yardages and volume don't drop off erratically across a position (what I mean is that the WR10 doesn't have 1,800 yards and the WR13 has 900 yards over a season). It doesn't work that way. It's all pretty tightly knit, and what separates out certain players with similar volume, often, is touchdown scoring.

So, then, there's a lot of value in finding the players who score touchdowns (duh), but how can we do that?

Naturally, it's tough. One thing we can do, though, is actually look back at last year to see who scored a lot. It's not that we just pencil in those same players to repeat their touchdown rates. It's actually the opposite (usually).

Touchdown rates do a pretty good job of correcting year to year, and we can use that to figure out which wideouts should have better touchdown luck in 2020 than they had in 2019.

The Math Behind It All

Those expected point changes add up over a full year and, historically, correlate very well with touchdowns.

Here's the relationship between total Reception NEP and total touchdowns since 2000. 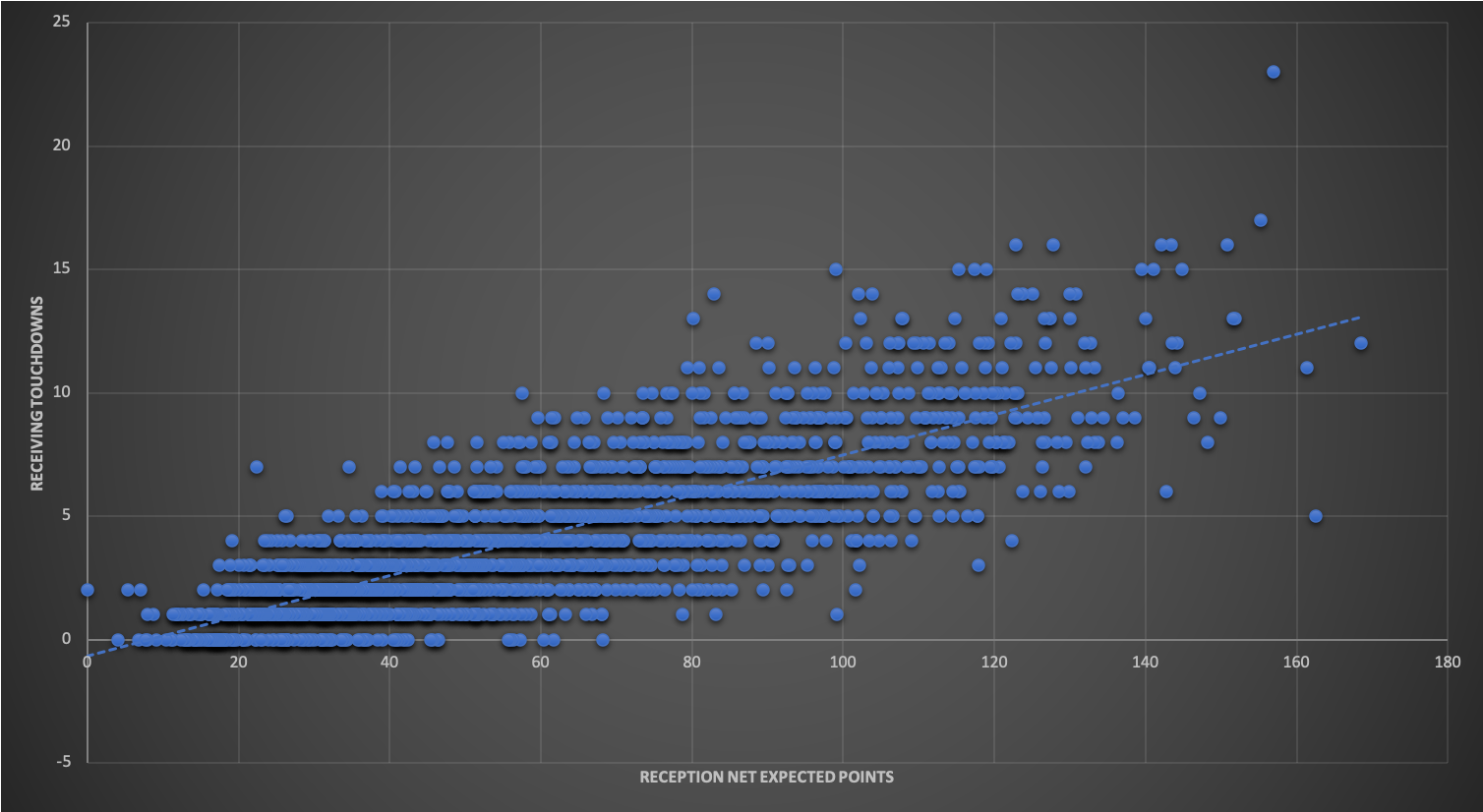 So, by this measure, there have been 332 receivers who outperformed their touchdown total by at least a full score in one year and who then also had at least 30 catches the next year. Of those 332, 274 of them (82.5%) saw a lower reception-per-touchdown rate the following season. Only 107 of them (32.2%) outperformed their touchdown totals by at least a full score in consecutive years. Some wideouts may be "touchdown makers," but it's definitely the minority of players who outplay touchdown expectations significantly and consistently.

Similarly, 367 receivers underperformed in the touchdown column by at least a full touchdown and saw at least 30 catches the following season. Of those, 270 (73.6%) increased their reception-per-touchdown rate.

So, it's not perfect. Nothing ever will be when it comes to finding touchdown rates, but it's close, and we can feel confident that players who underperformed in touchdown rate should have a better go the following year. Who are those candidates?

These are the wideouts who scored at least 1.0 fewer times than they "should have" based on their Reception NEP output.

It's kind of funny to see Mike Williams on the list, let alone at the top, because of his touchdowns splits over the past two years. He scored 10 times on 43 catches (664 yards) in 2018 and then just 2 times on 49 catches (1,001 yards). That gives him 12 touchdowns over those two seasons, and based on his Reception NEP, he should've scored 12.19 times. That's a pretty good notch in favor of the process. Williams was third in touchdowns over expectation in 2018 and then fell back to earth in 2019 to be the biggest underperformer in that category.

Robert Woods set a career high in touchdown catches in 2018 with 6 but actually should've had 8.04 and was due for some positive regression in 2019. That didn't happen, and he scored twice despite 90 catches and 1,134 yards. For his career, Woods has 7.82 fewer touchdowns than his Reception NEP indicates he should have, the 8th-biggest discrepancy among 299 receivers in the sample since 2012. Woods may be an outlier who doesn't score as much as he should -- or he could be set for a big boost in 2020.

Speaking of Jones, he once again made the list in 2019, and no receiver has underperformed in touchdowns more than Jones has. His Reception NEP indicates that he should have 75.3 career touchdowns instead of the 57 he has actually scored in the regular season. He's 18.3 touchdowns off his mark, and only 13 other receivers (out of 528 in the data set) have been at least 10 touchdowns short of their expected total.

So far on this list, three guys (all but Williams) have shown a tendency to underperform as scorers in their careers, though Moore's is short, and Woods' biggest discrepancies have come the past two years.

I won't dig into Danny Amendola or Alex Erickson, who aren't fantasy relevant. Michael Thomas, though, is surprising. Thomas couldn't have done much more than he did in 2019, so it's crazy to think that he was on par for 11.56 touchdowns with his efficiency. That's quite a tidbit for an elite fantasy season.

Keenan Allen was also a big deviation away from his expected total in 2019, same as his teammate (Williams). We can pin a lot of that on Philip Rivers and the offense. The Los Angeles Chargers will turn it over to a new quarterback, and that'll mess with the receivers' regression a bit, but we can be confident that both of those top receivers should have seen better scoring luck in 2019 and could get it in 2020.

To varying degrees, Anthony Miller, Odell Beckham, and Davante Adams are interesting additions toward the top of the list.

Miller's teammate, Allen Robinson, also underperformed with 7 touchdowns on an expected rate of 8.52. That's still a pretty big gap for the Chicago Bears' duo. Of note, Miller is still up 2.36 scores on his career Reception NEP's expected touchdown tally. Robinson is about even. I'm pretty bullish on Robinson -- and Miller, too.

Beckham and Jarvis Landry (-1.39) caught the poor end of touchdown variance in Cleveland, as well. Perhaps those midwestern receivers are set for better luck in 2020. The data says they are, though it's worth noting that Beckham is still up 4.16 scores on his expected scoring line. We can generally give that a pass because of how talented he is. (The biggest deviators since 2000 are Randy Moss, Terrell Owens, Marvin Harrison, Dez Bryant, and Jordy Nelson).

The last note I'll make here is about Davante Adams, who ranks 13th since 2000 in outperforming his touchdown expectation. He's up 9.49 scores over his expected rate. The analysis here doesn't look at historical rates but rather prior year numbers. We should probably be able to trust that Adams can get ahead of his regression skiis and score plenty in 2020 after a down year in 2019.