NBA Betting Guide for Thursday 4/22/21: Taking the Points With Some Underdogs

With the way fantasy football is trending, many people are moving away from looking at traditional stats (yards per carry, targets per game, etc.) to utilizing more advanced metrics (yards per route run, Net Expected Points (NEP), Success Rates, etc.). Air yards is one of those advanced stats and the primary focus of this piece.

If you're not familiar with air yards, it is simply the distance that the ball travels in the air from the line of scrimmage to where the receiver is. By averaging those values for a receiver on his targets, you'll get his average depth of target (aDOT), which is another commonly used metric these days.

Air yards can give us a sense of how receivers are being used in their respective offenses and provide context for how efficient different receivers are. Throughout this piece, I'll shine a light on the different metrics that air yards explains, who the leaders are for these metrics, and what it means for the 2020 fantasy football season.

All data is taken from AirYards.com or the nflfastR repository unless otherwise noted.

This first section will simply look at pass catchers' total air yards throughout the 2019 season. Taking a look back at last year, we see a lot of familiar names at the top of the air yards leaderboard (top 20 players in air yards listed in the table below) -- they're familiar because we often find them at the top of fantasy football rankings.

Notably, Curtis Samuel was the only player among the top ten players in air yards to finish with at least 1,000 receiving yards. Similarly, Robby Anderson was the only other player to fail to reach 1,000 receiving yards among the top 20 receivers in air yards. Oddly enough, these two are now on the same team and will compete for those deep targets.

As you'll notice, there aren't any tight ends that appear on the list above. The tight end with the most air yards, Travis Kelce, finished with 1,218 air yards - this was good enough for 30th overall last year. Zach Ertz and Mark Andrews were the only other two tight ends to have at least 1,000 air yards, finishing with 1,167 and 1,035 air yards, respectively.

Additionally, two teams -- the Carolina Panthers and Cleveland Browns -- each had two receivers finish in this list. Both of these teams have new head coaches this season, so it will be interesting to see if these trends continue or if the air yards are balanced out a bit more.

As we take the next step in our air yards journey, I want to introduce two important metrics: receiver air conversion ratio (RACR) and weighted opportunity rating (WOPR).

RACR is an efficiency metric that combines catch rate and yards after the catch to describe the receiving yards a player creates for every air yard thrown at him. The formula for RACR is simply total receiving yards divided by total air yards.

Both of these metrics carry extra weight when evaluating receiver performance because the year-over-year correlation for RACR and WOPR is 0.32 and 0.33, respectively - relatively high marks for any football-related statistics.

Let's start by looking at the 2019 leaders in RACR (I used a minimum of 50 receptions for this, as it's much easier to have a higher RACR on fewer receptions, which skews the data).

As you can see, there are a lot of tight ends that top this list. Why? As demonstrated by their total air yards count, they tend to have a lower aDOT but are especially skillful after the catch. The first wide receiver atop this list is Deebo Samuel, who, unfortunately, suffered a broken foot a couple of weeks ago. As a rookie, Samuel averaged 8.3 yards after the catch, which ranked second among wide receivers last year.

A trio of Los Angeles Rams pass catchers -- Cooper Kupp, Robert Woods, and Tyler Higbee -- also made the list. This would tend to benefit Jared Goff, as he racks up passing yards because of his receivers' ability to gain extra yards after the catch.

As far as WOPR, the top of the leaderboard, again, has several familiar names.


Since 2014, Michael Thomas' 0.75 WOPR last year ranked eighth among all pass-catchers. Davante Adams also remained an elite receiver, despite missing four games last season due to a turf toe injury. Additionally, rookie Terry McLaurin proved how capable he is at taking advantage of his opportunities. If McLaurin can get a bump in targets this year, he's likely to find major success in fantasy football.

Courtland Sutton topping the leaderboard makes sense, given what the Denver Broncos had at receiver behind him. Stefon Diggs' air yards market share helps explain how we was able to post a career-high in receiving yardage despite garnering the fewest looks since his rookie season.

To take this a step further, I took a look at how player air yard market shares changed based on different buckets of air yard depths. The reason I did this was on the back of a suggestion from Josh Hermsmeyer (the creator of AirYards.com), as he pointed out the value of separating targets into different depth buckets since not all targets are created equal.

In order to get the depth buckets you'll see, I used data from 2011-2019 to determine what the 33rd percentile and 66th percentile were for air yards, and used those as my ranges. Also included in these tables are the RACR and WOPR that the receiver earned at each depth bucket, sorted by air yards market share. 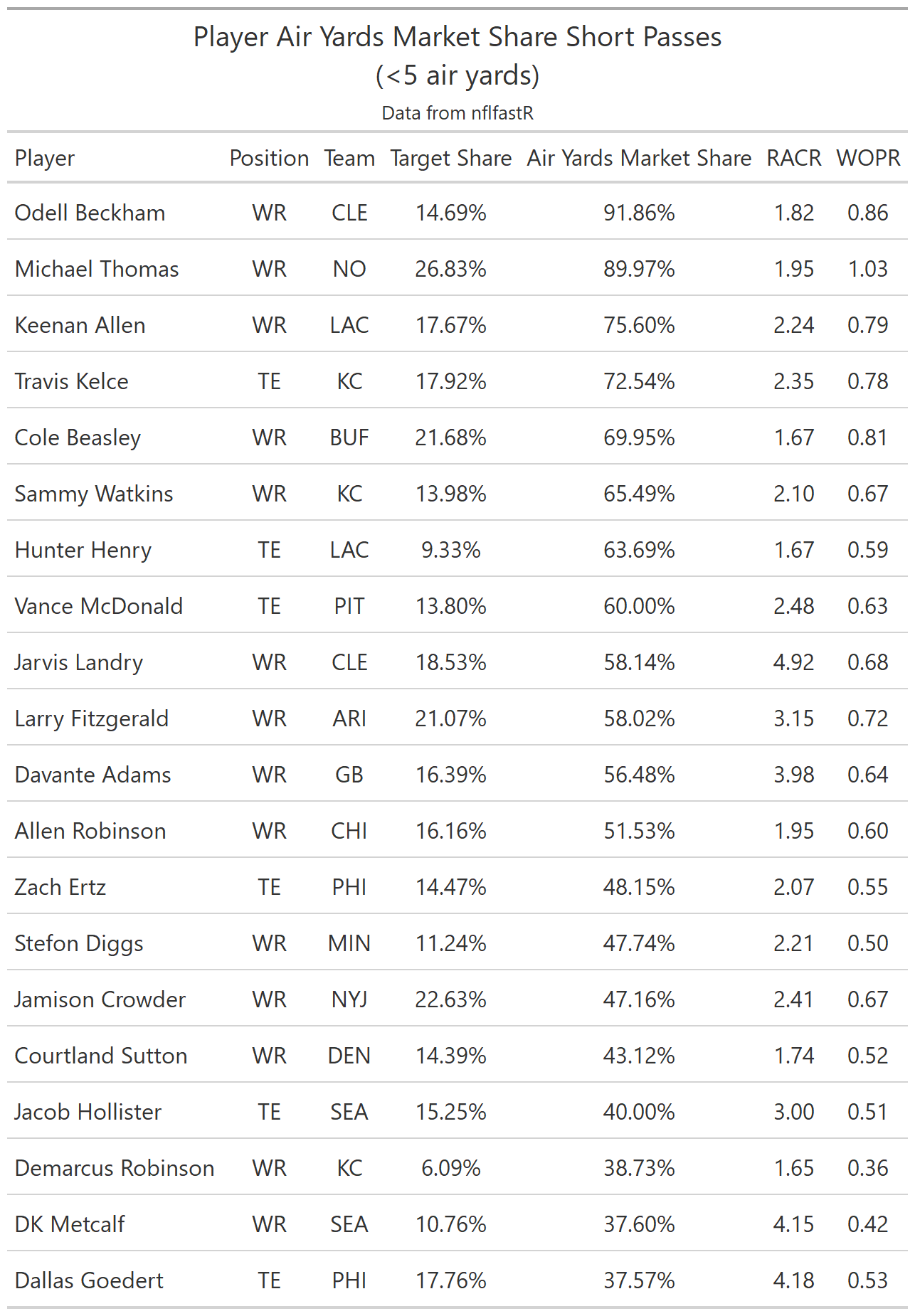 You would think this list might be littered with running backs because of the number of targets they're getting on dump-off passes and screens, but remember, this is looking at the leaders in air yards market share. Most of those screens or dump-off passes will have negative air yards, so getting targets a couple of yards downfield will be that much more heavily weighted.

While the overall air yards market share chart indicates that Diggs and John Brown will be the deep threats in the Buffalo Bills offense (more on that later), it's clear from the short-pass leaderboard that Josh Allen trusts Cole Beasley as his short-area target.

You'll also notice that both Philadelphia Eagles' tight ends -- Ertz and Dallas Goedert -- made the list for short-area targets. That makes sense, given the fact that the Eagles targeted tight ends on nearly 40 percent of their passes last season. 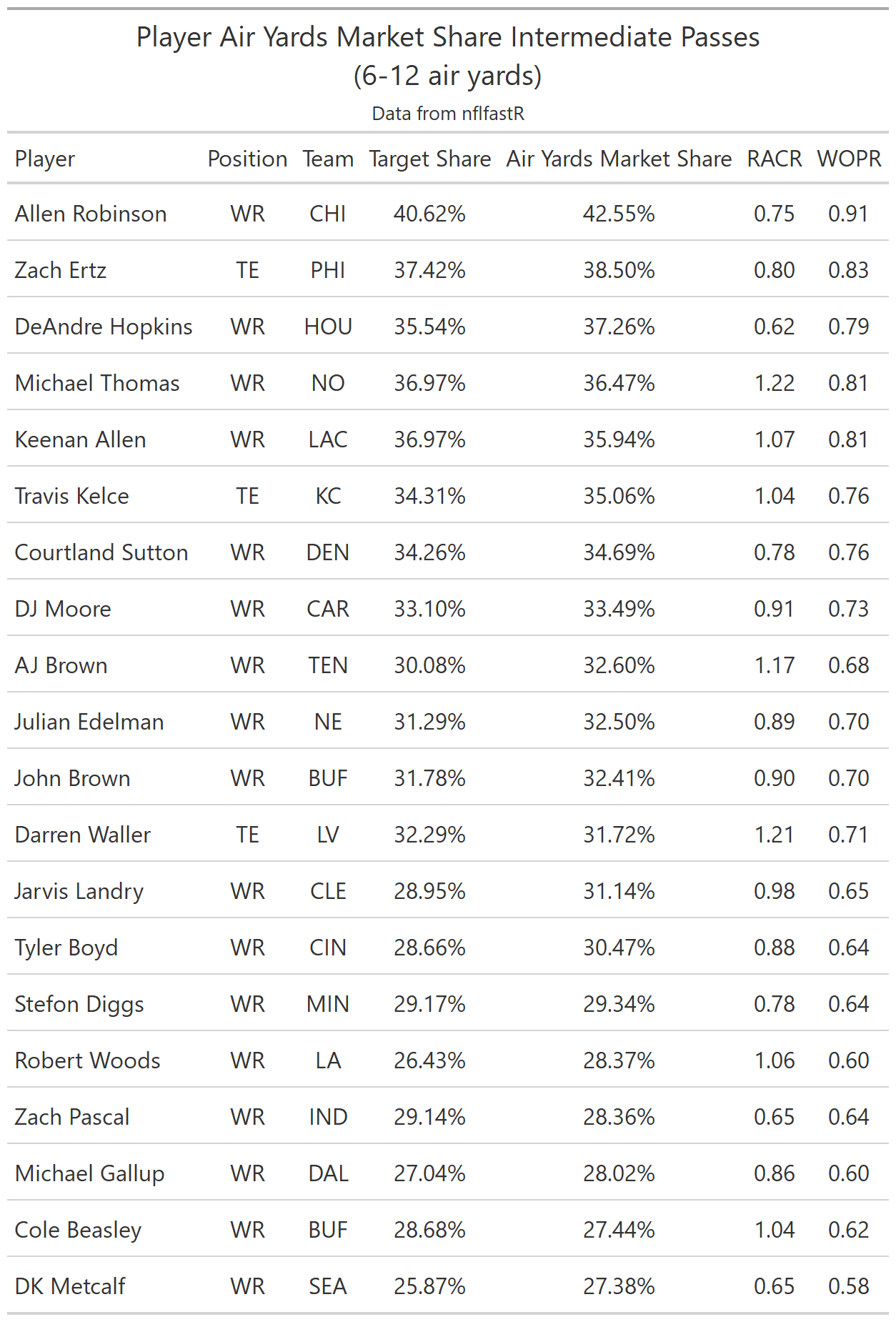 Surprisingly, D.K. Metcalf, who came into the NFL known for his deep threat ability, led all Seattle Seahawks' receivers in market share on passes under 5 yards and passes between 6 and 12 air yards.

D.J. Moore could also be poised for another big year as Teddy Bridgewater's primary option in the intermediate area of the field. 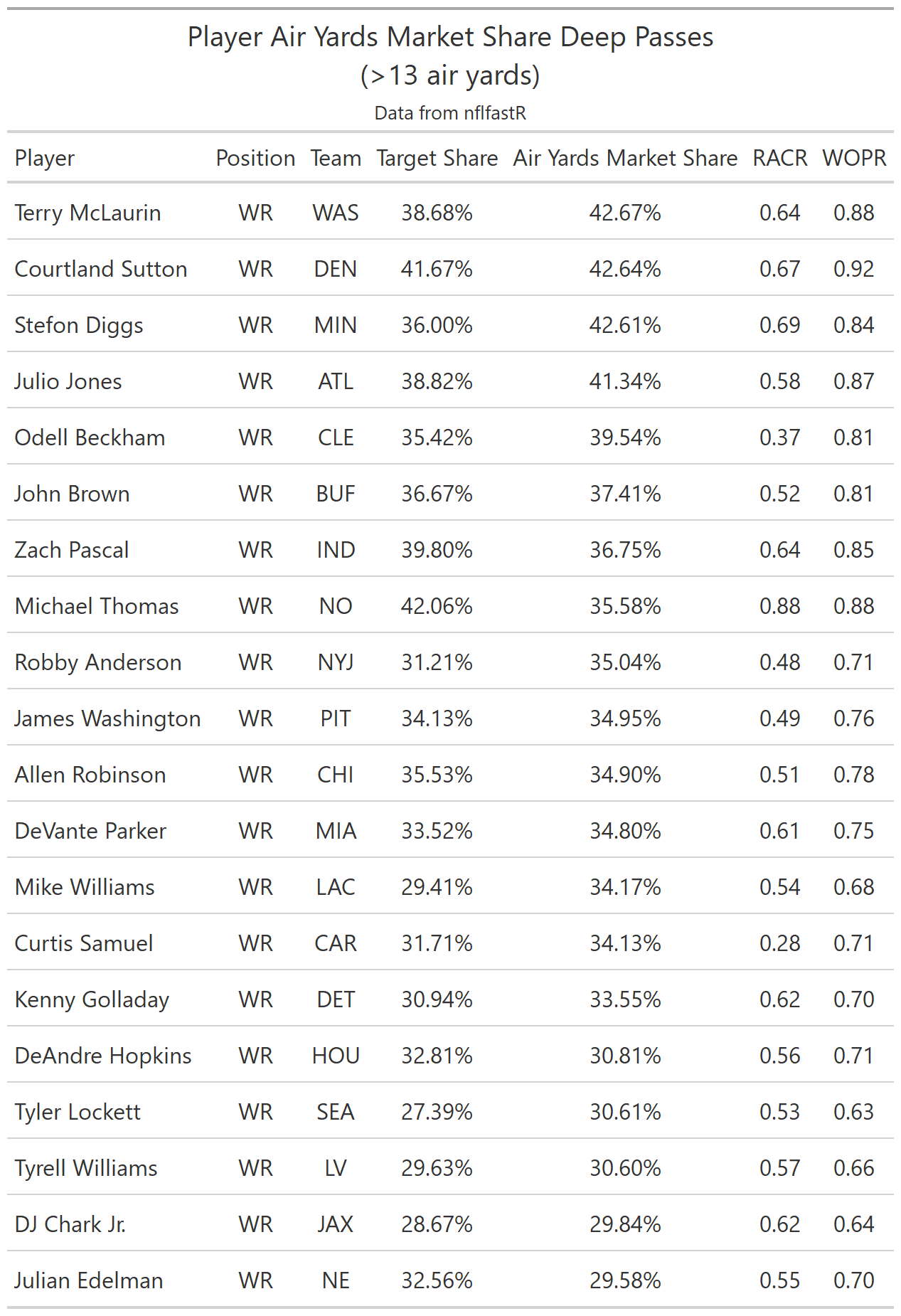 Once again, McLaurin and Sutton both stand out. Each of them broke out last year, as they each commanded a massive share of their team's respective deep targets.

James Washington is another player to watch. As the hype around Diontae Johnson continues to build this offseason, there may be some value in taking the third-year receiver for the Pittsburgh Steelers.

If you'd like to see how all receivers fared at different depths of the field, feel free to check out the stats here.

As we move into looking at what all this means for the 2020 season, it's important to understand which of these stats correlate most year-over-year. The R-squared (proportion of the variance for a variable that's explained by another variable) for each of the primary air yards metrics is shown in the table below (note: since these stats are primarily used for pass catchers, I excluded running backs from this analysis).

Both Diggs and Josh Brown had at least 1,400 air yards, a 38 percent air yards market share, and an aDOT of 14.5 last season. They're both deep threats, which makes them joining forces in Buffalo a fantasy conundrum. Despite Josh Allen's proclivity for throwing deep, it's very likely that either one of them suffers at the hand of the other or cannibalizes each other enough to the extent that they both become irrelevant.

The Los Angeles Chargers are another interesting case, as both Mike Williams and Keenan Allen had over 1,500 air yards last year. However, they're going from gunslinging Philip Rivers as their quarterback to a more conservative quarterback in Tyrod Taylor. If anyone's able to suffer less from this change, I would put my money on it being Allen. Allen has consistently been one of the best route runners and has demonstrated a high air yard share in the intermediate area of the field.

On the flip side, the Indianapolis Colts added the aforementioned Rivers under center, which could mean a boost in air yards for T.Y. Hilton and others. Second-year player Parris Campbell and rookie Michael Pittman Jr. will also be able to compete for a decent share of the air yards, as they're both considered field-stretchers.

Another receiving corps to pay close attention to is that of the Arizona Cardinals. By adding DeAndre Hopkins this offseason, the Cardinals will need to find a way to get him, Larry Fitzgerald, and Christian Kirk involved in the intermediate area of the field. Kirk and Fitzgerald finished with a target share of 25.6 percent and 17.6 percent, respectively, in that area of the field, while Hopkins had an elite 35.5 percent intermediate target share in his final season with the Houston Texans.

Finally, there are several teams with plenty of air yards up for grabs heading into the 2020 season.

Teams with the Most Available Air Yards

Though the Atlanta Falcons lead this list with the departures of Austin Hooper, Mohamed Sanu, and Devonta Freeman, a large portion of that will be taken up by their new additions in Hayden Hurst and Todd Gurley.

The next three highest teams -- the New York Jets, Dallas Cowboys, and Minnesota Vikings -- each drafted a highly-touted receiver to make up for some of their losses. Of the three receivers drafted, I'd give CeeDee Lamb the best chance to take advantage of this opportunity, given Mike McCarthy's history of supporting multiple wide receivers.

Covering the Spread: Weighing Evaluation Versus Reporting When Betting the NFL Draft With Dr. Eric Eager