How to Find Breakout Wide Receivers in Fantasy Football

D.J. Chark had a monster year in 2019, but not just because he had over 1,000 receiving yards with 8 scores in 15 games played. A little bit of context makes that stat line even more meaningful for fantasy football purposes.

Chark, as we know, wasn't drafted early. According to My Fantasy League's average draft position (ADP) data, 88 wide receivers were selected in front of Chark last year. So he not only gave fantasy managers a more-than-usable stat line, but he did it while being picked up super, super late in drafts.

How often do those types of seasons happen at wide receiver, though? Is there a way to increase our probability of finding Chark-like wide receivers year in and year out?

How do we find breakout wide receivers in our fantasy football drafts?

If you were on numberFire.com last week, you may have noticed an article similar to this one on running backs. And if you read said article, then some of the methodology that's going to be introduced to you will sound familiar. Hang in there. 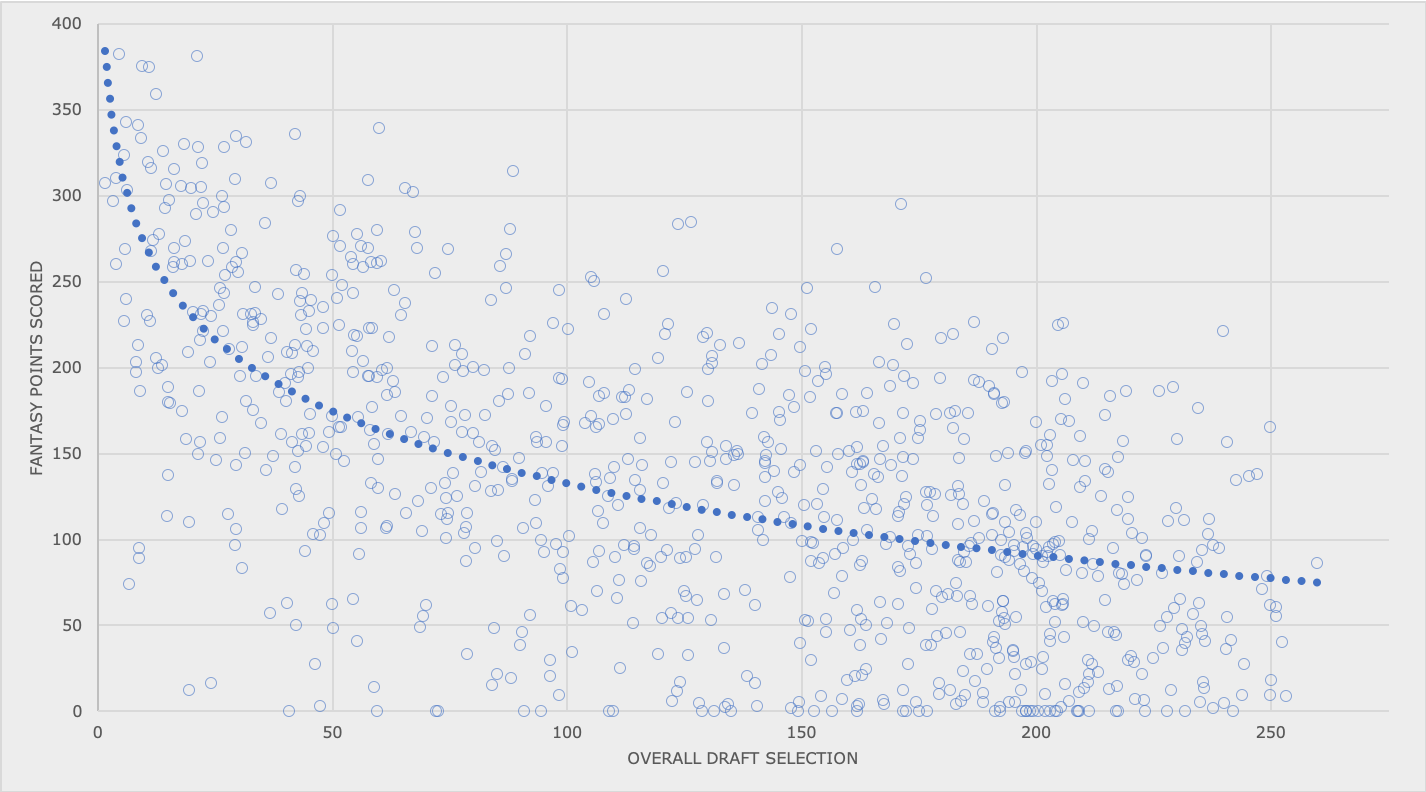 What you're looking at is a bunch of dots. But they're dots with some meaning. The x-axis represents the overall draft selection for every wide receiver drafted since the 2011 fantasy season. The y-axis shows us how many fantasy points a player scored at that ADP. The trendline, then, is showing us expectation, or the number of fantasy points we'd expect a wide receiver to score at a particular draft slot.

So, looking at the plot, a wideout selected 100th overall would be expected to produce about 132 PPR fantasy points. One selected 50th overall is closer to 175 points.

Utilizing the trendline can help show us which players overperformed and underperformed most over the last nine seasons.

The 10 wideouts listed above have produced the 10-most valuable fantasy seasons at wide receiver since 2011. Odell Beckham's rookie campaign leads the group, where he was drafted 171st overall and scored 295 points. A receiver at that draft slot historically has scored about 100 points, so he outperformed expectation by 195 fantasy points.

Like I mentioned in last week's running back article, this table doesn't necessarily give us breakout players. Was Antonio Brown's 2014 season really a breakout one? Fantasy managers were expecting a pretty good season given his 21st overall price tag -- he just ended up outperforming it by a wide margin.

Instead of looking at all wide receivers to find a good sample of breakout receivers, let's limit things to pass-catchers drafted after Round 5. That's where data seems to show a big drop off in opportunity cost.

That filter changes our "top-10 values" list a bit, with names like Davante Adams and Tyler Boyd getting more love.

But 10 players won't tell us a whole lot about the characteristics that later-round, breakout wide receivers share. So let's expand our sample to players who outperformed expectation by 100 or more fantasy points. That leaves us with a sample of 52 wide receiver breakouts.

What types of things do these players have in common?

Similar to the running back study last week, wide receivers who are breaking out from the late rounds are doing so on teams without top-tier wide receiver talent. Or, I should say, perceived top-tier talent.

To put this all another way, breakout wide receivers haven't usually had a ton of competition at the position. At least, the market is telling us they didn't have much competition.

One thing to note about this relates to the first trend: if a breakout wide receiver had a teammate drafted early, he typically also had a good fantasy quarterback throwing him the ball.

As I mentioned, only eight wide receivers from our breakout sample had a teammate selected in the first two rounds of fantasy drafts. The quarterbacks of those eight wideouts had an average ADP of QB10. If you expand things to looking at the first four rounds -- looking at wide receivers who had a teammate selected before Pick 49 -- the quarterback ADP averages out to QB12. Post Pick 49, or after Round 4, that shoots up to QB22.

This is all pretty reasonable. If a later-round wide receiver ends up outperforming expectation by a wide margin, and if that late-round wide receiver also has a wide receiver teammate being selected high in fantasy drafts, then in order to sustain the production for both players, their quarterback is probably good.

Trend 3: Breakout Wide Receivers Are Most Impactful When They're Young

The tabular data you're staring at shows the average number of points above expectation that we're seeing from breakout wide receivers at different levels of experience. We've seen six breakout wide receivers who've been rookies, for example, and among that group, the average points above expectation has been nearly 131. (For the record, that's being skewed a bit by Odell Beckham's record-breaking rookie campaign.)

As you move down the list -- as you move from one year of experience to the next -- you start to notice a decline in the average points above expectation. All of the wide receivers in our sample are good -- they all exceeded expectation by at least 100 points, after all -- but the younger players tend to be better.

Here's another way of looking at it:

Older wide receivers can give you a breakout season. We've seen 20 wide receivers since 2011 exceed ADP expectation by 100 or more points all while playing in Year 6 or beyond.

But it's pretty clear that you'll get more from targeting younger wide receivers.

When looking at the metrics that correlate strongest year over year at wide receiver, we typically find that volume-driven ones are best. It's not yards per reception or yards per target that tell us the most about future performance.

From that perspective, this fourth and final trend makes a lot of sense. Wide receivers are rarely breaking out without any baseline production.

As you just saw, 6 of the 52 wide receivers in our sample were rookies when they broke out. They have no previous-season data as a result.

These wide receivers are rarely coming from nowhere. D.J. Chark-like seasons can happen, but you're better off betting on a player who was used more significantly the previous season.

This is all about probability. You can luck into some good late-round picks in a given season, but without a process to find those gems, it'll be tough to do that consistently. It's harder to win year in and year out without a process.

If you're curious as to who I like at wide receiver in the middle and late rounds given this criteria, though, then make sure you're subscribed to The Late-Round Podcast. I'll be going over my picks on Monday's show.