Fantasy Football: What Last Year’s Pace Trends Tell Us About 2020

If you do your own fantasy football projections, pace of play and total play count are large factors in building a model.

Conceptually, you would think that the faster a team plays, the more opportunities it might have to score. But there's more to it than just that, as pace of play can give you a lens into a team's offensive philosophy.

Hopefully this post will give you an idea of how teams fared in 2019 and over the past couple of years, as well as how this impacts fantasy football for 2020.

All data used in this article (unless otherwise noted) is from the nflfastR play-by-play repository and is filtered on only running and passing plays.

As a lead-in to looking at historical data, I wanted to introduce some statistics regarding the predictability of pace of play both year-over-year as well as within the same season. In fantasy football, predicting the future is our main goal, so it's important to understand how much the past influences the future.

The R squared (proportion of the variance for a variable that's explained by another variable) for offensive year-over-year pace of play is only 0.15, so it's not that strongly correlated. I then wanted to find out if coaching changes had anything to do with the instability, so I removed all of the seasons in which a new head coach was hired. With that set of data, the R squared was still only a measly 0.17. 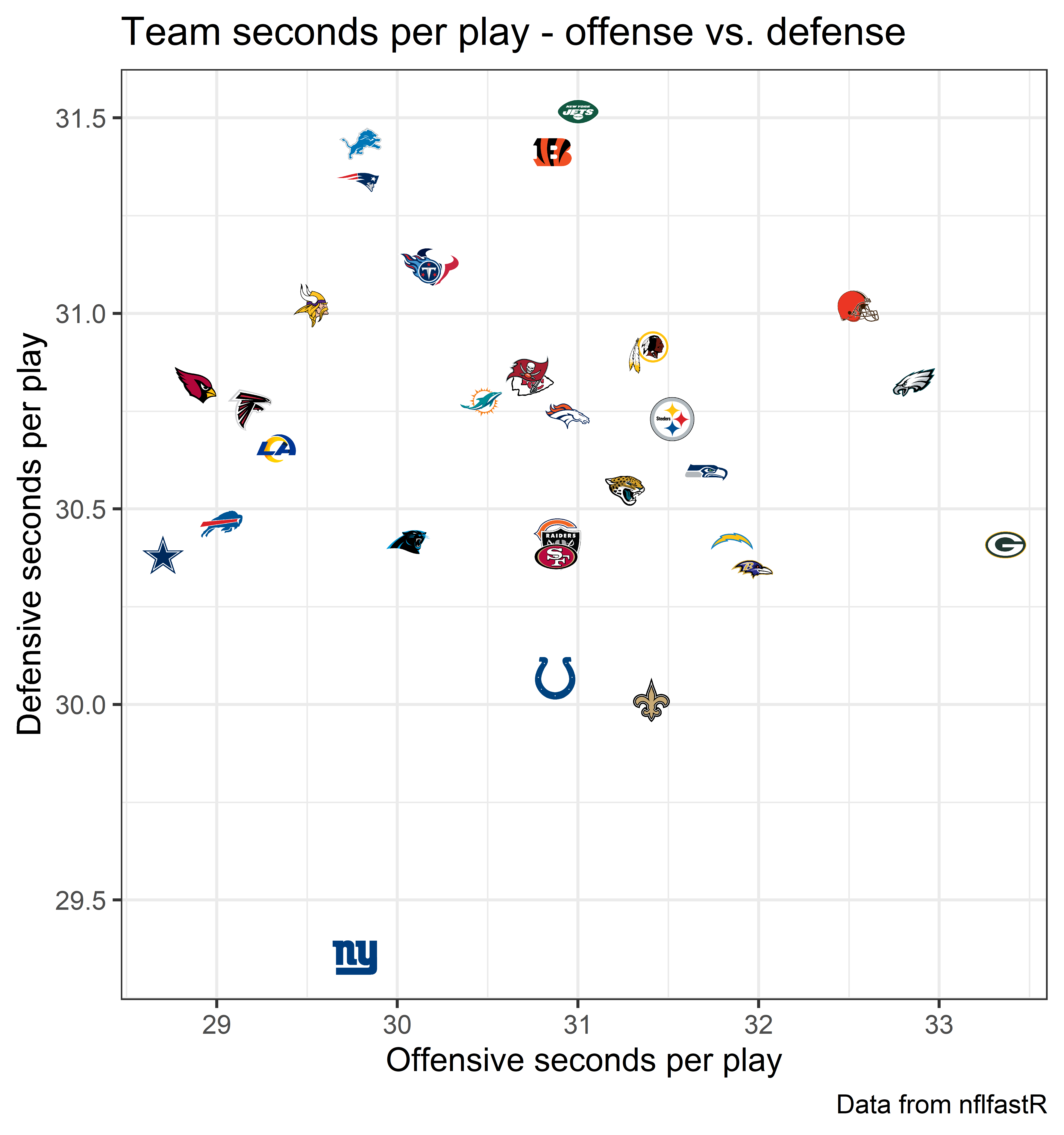 
As you'll notice, the New York Giants were the only team under 30 seconds per play on both offense and defense last year. This is particularly intriguing given the Giants ranked 18th in offensive plays per game and 27th in defensive plays allowed per game.

Going a step further in my pace-of-play analysis was to take a look at how teams performed under different game scenarios. Understanding pace of play in neutral game scripts is perhaps the best way to recognize how fast teams play when they're not forced into passing the ball late in the game or trying to burn the clock by draining the play clock. 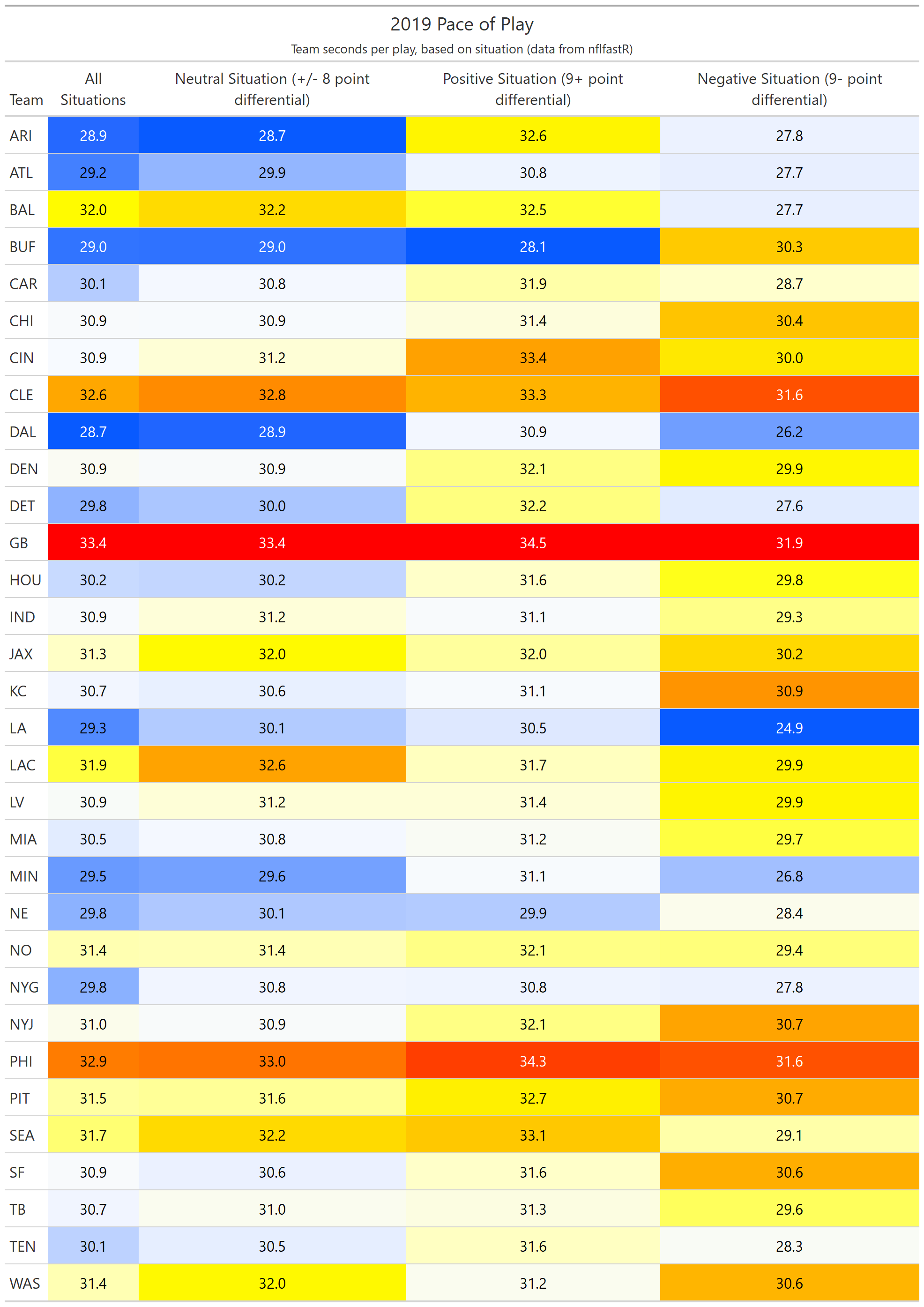 If either of these teams' defenses (which both finished inside the top 10 in Adjusted Defensive Net Expected Points per play) regress even some, we could see some dramatic swings in their 2020 pace of play.

Scoring is one of the most influential aspects of fantasy football because of how much weight touchdowns carry on a weekly and yearly basis. The following table highlights how teams performed on touchdown-scoring drives only, giving us an idea of how teams were able to score.

Likely thanks to the breakout of A.J. Brown and the extreme efficiency of the Ryan Tannehill-led offense, the Tennessee Titans led the NFL in both fewest plays per touchdown drive (6.4) and seconds per scoring drive (averaging just over three minutes). The San Francisco 49ers and Pittsburgh Steelers were not far behind the Titans, averaging 6.5 and 6.6 plays per scoring drive, respectively.

Surprisingly, despite being one of the slowest teams in the NFL last year, the Packers finished in the top five in plays per scoring drive at 6.7 and did so fairly quickly at around three-and-a-half minutes per drive. 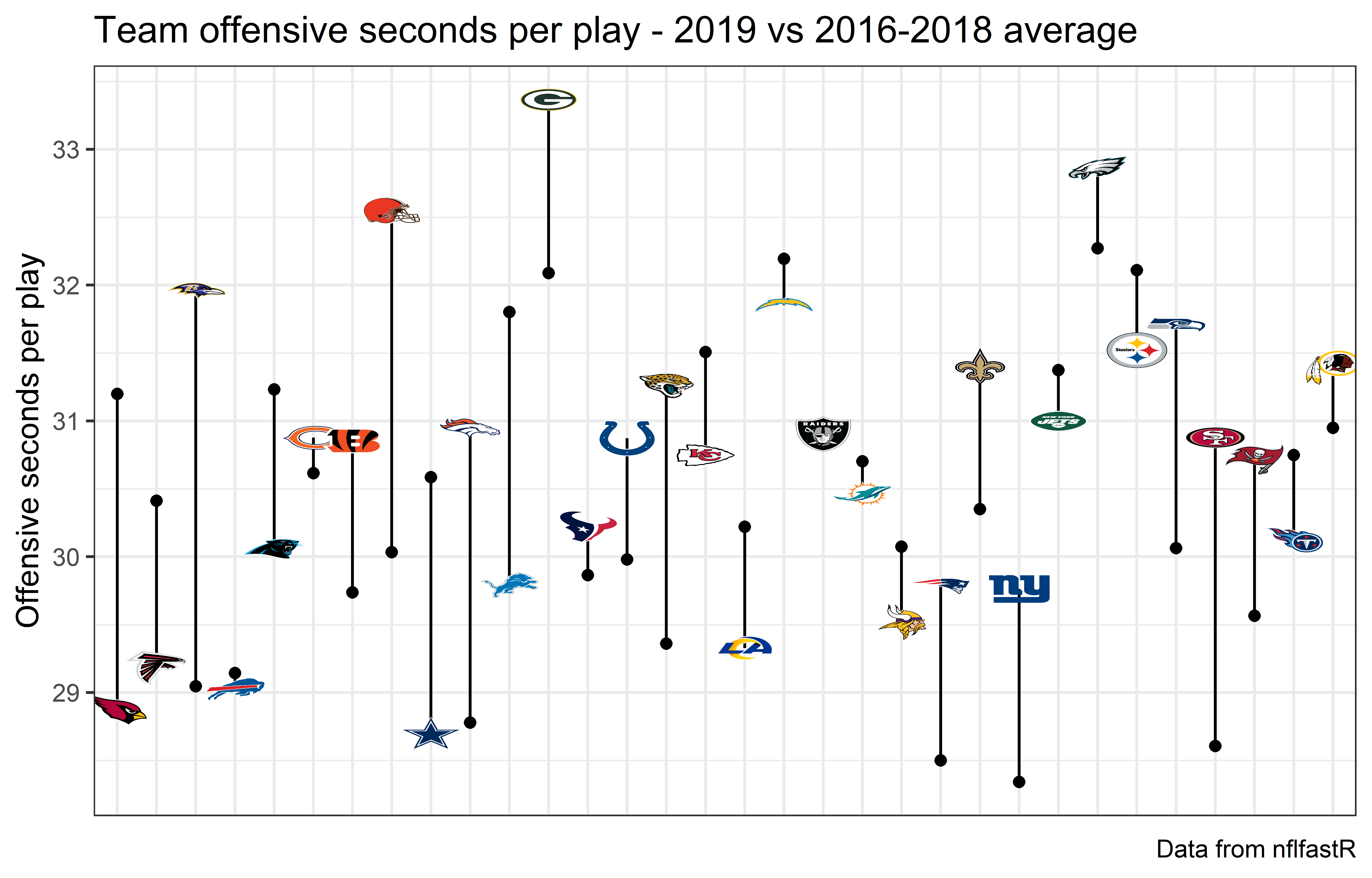 Aaron Rodgers is very well known for winding the play clock down to the waning seconds before snapping the ball, giving Packers fans everywhere heart palpitations as they wait for him to start the play. With rumors that this team will continue to be focused on running the ball, expect this slow pace of play trend to continue into 2020.

Similarly, the Baltimore Ravens' pace of play dropped significantly despite having one of the most electric offenses in all of football. The league leaders in points per game ran an offensive play three seconds per play slower than they had in the prior three seasons. Conventional wisdom would suggest that you need to have a high rate of plays to be scoring that much, but keep in mind that the Ravens averaged 6.1 yards per play (third in the league) and they had the most clock-moving plays (rush attempts plus completions) in 2019 with 885.

On the opposite side of that trend, we see the Kliff Kingsbury effect in full force with the Arizona Cardinals. The Cardinals jumped up considerably in seconds per play in their first year under the new head coach, running a play two seconds faster than before Kingsbury arrived.

Though not as dramatic, the Carolina Panthers also made a leap in offensive seconds per play, running plays about 1.5 seconds faster than previously. Having brought in Matt Rhule from the college ranks, it will be interesting to see if they have another spike in play rate in 2020.

Finally, the Detroit Lions saw a boost in pace of play in their first year with Darrell Bevell as offensive coordinator. For a man that was very well known for pounding the rock in Seattle, the Lions passed the ball over 60 percent of the time on their way to finishing inside the top 10 in seconds per play.