From Week 13 on in the 2019 season, there was no tight end more productive than the Los Angeles Rams' Tyler Higbee. Higbee's random explosion stemmed from a heavy increase in usage, a target share that skyrocketed, and an upwards trend in his percentage of snaps played (didn't dip below 85% of snaps played during those weeks). Was Higbee's explosion a random coincidence, or did Higbee simply take longer to develop? Let's examine below.

Higbee's season could be split into two halves -- a subpar first 12 weeks, and a downright dominant final five weeks. The statistical split between those two halves were incredibly drastic, as you can see below:

In fact, Higbee was so dominant throughout the final five weeks of the season, he became the only tight end in NFL history with five straight games of 7-plus receptions and 80-plus receiving yards. Trying to understand why Higbee suddenly received such a drastic increase in playing time -- in addition to his increased usage -- may not make sense, until we take a deeper look at the situation surrounding the Rams' offense and what occurred.

Here are some of his opportunity and efficiency numbers according to Player Profiler: 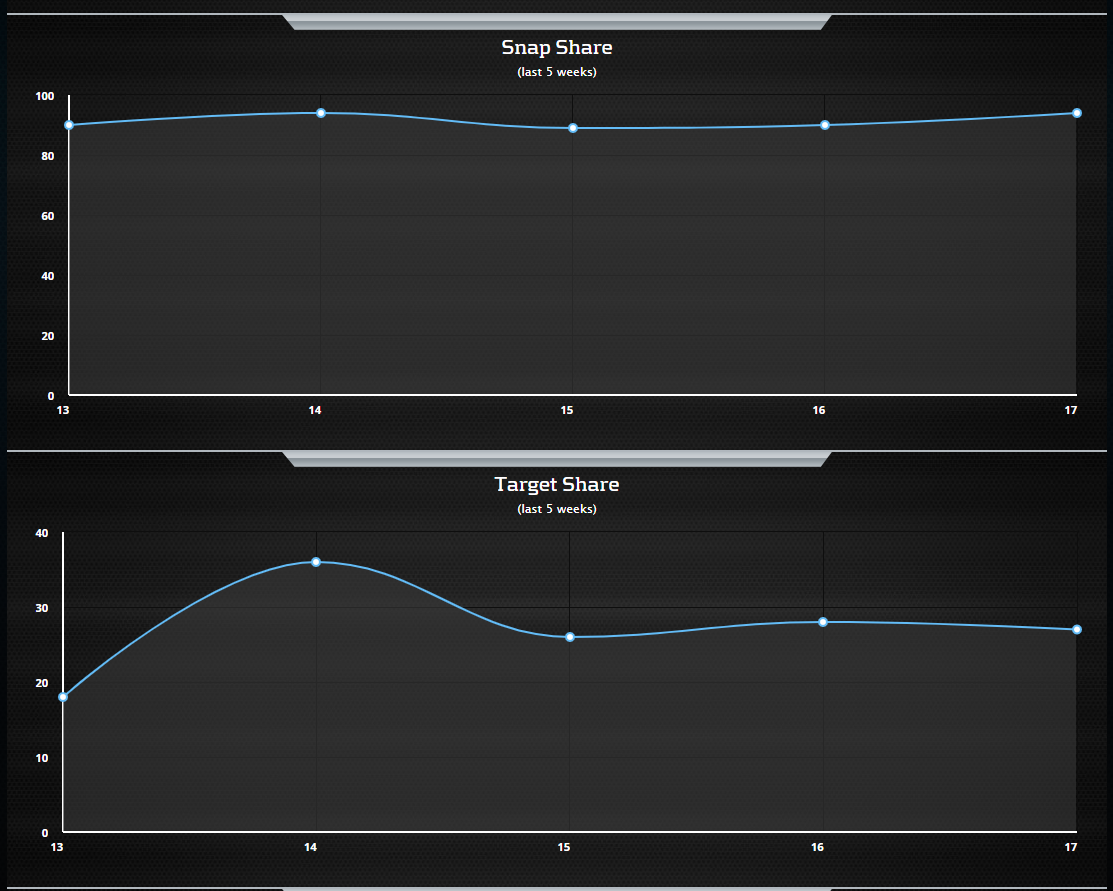 The only skill position player on the Rams that registered 16 games of playing time was wide receiver, Cooper Kupp. The remaining players all missed time, including running back Todd Gurley. Now you might be wondering, "what's your point?". The reason injuries are relevant to this discussion is because it helps explain the random uptick in snaps, usage, and targets for Higbee.

Throughout the first 12 weeks of the season, Higbee was actually out-snapped by fellow tight end, and former second-round draft pick Gerald Everett. Everett is the more explosive athlete of the two, and was actually the first draft pick by Head Coach Sean McVay.

Once Everett sustained a wrist injury in Week 11 and a knee injury in Week 12, his season ultimately dwindled away as he played only 21 snaps from Week 11 onward (four games).

Everett's sidelining allowed for Higbee's snap share to increase significantly, just as the chart shows -- he nearly doubled the amount of snaps he was playing while Everett was sidelined.

Much of that likely had to do with the subpar play of the Rams' offensive line as the 12-personnel grouping resulted in a more effective blocking performance for the ground game and for quarterback Jared Goff.

During Higbee's five-week explosion, he opposed some of the worst defenses in fantasy football vs. opposing tight ends. Here are the matchups and their rankings when covering tight ends:

As you can see, Higbee walked into an incredibly easy schedule with four out of his five games coming against bottom-six defenses whilst covering tight ends, two of which were against the worst-ranked defense in the Arizona Cardinals. One of those matchups proved to be a major positive for Everett too, as he registered a seven-reception and 136-yard performance against the Seattle Seahawks in Week 5.

According to Fantasy Pro's draft consensus board, Higbee's currently being selected as the ninth tight end (79th overall) in full-point PPR leagues. That ranks ahead of Cleveland Browns tight end Austin Hooper, New Orleans Saints' Jared Cook, and Denver Broncos' Noah Fant. If you expect the Rams to transition to a more balanced attack -- meaning more 12-personnel -- then you may feel comfortable selecting Higbee at his current ADP.

Though, if you expect Everett to factor back into the offense, the Rams to potentially use their duo of running backs more in the passing game, and still deploy what now appears to be a strong rotation of four starting quality wide receivers, then Higbee's ADP may seem rich.

With how deep the Rams are at the skill position, the expectation is that no player may hit the volume threshold we'd like from our fantasy stars -- and Higbee is no different. He proved to be a quality player in those final five weeks of 2019, but the Rams re-stocked the weapons cabinet in the offseason, spending two second-round draft picks on running back Cam Akers and wide receiver Van Jefferson.

The Rams also selected tight end, Brycen Hopkins, in the fourth-round, though the expectation is he's likely to be stashed in what could be considered a "redshirt" season. The additions of Akers and Jefferson likely won't steal much of the target share from Higbee, but a healthy Everett very well could, and the coaching staff even preferred to use Everett prior to the injuries he sustained which prematurely ended his season.

Mind you, McVay and his staff schemed Everett more snaps, targets, and usage throughout the first 10 or so weeks, and that was after Higbee received a four-year $29m contract extension -- proving just how high they are on Everett. With all of these situations considered, as well as the history of McVay and his offenses in Los Angeles, the Rams are likely to transition to more of a well-balanced attack featuring a duo at tight end as opposed to once again feeding Higbee the heavy target share he received in the final five weeks of 2019. If we consider his usage -- most notably target share -- being scaled back, Higbee becomes a tough sell at his current ADP.

Higbee is a very good football player, and one of the more effective tight end options in the league. The issue is his increased price tag due to his late-season explosion and the lack of a high-volume workload, with the Rams being one of the deepest skill position rosters in the league. Expect Higbee to put together a decent season, but not one similar to his final five weeks of the 2019 season.