The tight end position stinks. Outside of the elite options, it's usually a trainwreck.

Don't hold me to that, but I do find myself liking a few of the late-round tight ends this year.

Here are three players going outside the top 15 tight ends -- according to BestBall10's May ADP -- who offer some upside and are capable of returning TE1 (top-12) numbers this coming season.

And then we found out the Cards couldn't stop any tight ends, and Hockenson went on to record just 26 grabs, 236 yards and 1 touchdown the rest of the way.

There's reason for optimism in 2020, though.

We know tight ends struggle with the transition to the NFL, taking longer than most fantasy-relevant positions to make an impact, so Hockenson's low output in Year 1 isn't much cause for concern. Plus, the Detroit Lions got just eight games from Matthew Stafford in 2019, with their offense basically going down the drain over the second half of the year once David Blough and Jeff Driskel took over.

Stafford was ballin' out, too. The Lions put up 25.5 points per game in Stafford's eight starts, which would've been good enough to tie for seventh over the full season, and Stafford had his best-ever campaign going by our Net Expected Points metric.

Detroit could be a sneaky-good offense in 2020 if Stafford maintains that level of play, and outside of Marvin Jones and Kenny Golladay, there are targets up for grabs in this offense.

Hockenson is an outstanding athlete -- ranking in the 88th percentile or better in Agility Score, Burst Score and Catch Radius, per PlayerProfiler -- and he was the eighth overall pick for a reason. The Lions have plenty invested in him, and he could make a leap in Year 2.

Our models project Hockenson to be this year's TE12, forecasting him for a line of 54 catches, 590 yards and 3.6 tuddies. Coming off the board as the TE16, Hockenson offers decent value right now, but there's upside for more in what should be a quality offense.

With the offseason release of Delanie Walker, Jonnu Smith has officially been freed.

With Walker's last game coming in Week 7 of 2019, we got a sneak peek at Smith as the Tennessee Titans' top tight end. It wasn't out-of-this-world stuff, but it was decent. From Week 8 on, Smith totaled 26 receptions for 278 yards and 3 scores over the final nine games -- per-game averages of 2.8 grabs, 30.8 yards and 0.3 touchdowns.

Smith's numbers were bogged down by a Tennessee offense that leaned on Derrick Henry and ended the year with the third-lowest pass rate (51.2%).

The Titans would likely prefer to play a similar way this season, but the offense as a whole is due for some negative regression. Ryan Tannehill had a 6.9% touchdown rate last year, a mark much higher than the career 3.9% clip he had prior to 2019. He also averaged an insane 10.2 adjusted yards per attempt -- the sixth-best season ever -- compared to a career average of 6.7 at this time a year ago.

Normally, offensive regression would be bad fantasy-wise for the Titans players -- and it may end up working out that way -- but for receivers and tight ends, it could mean more volume as the Titans are unlikely to see as many positive game scripts as they did during Tannehill's remarkable 2019.

Smith is capable of taking advantage of any extra volume, and he's got an athletic profile worth drooling over, with the data from PlayerProfiler. 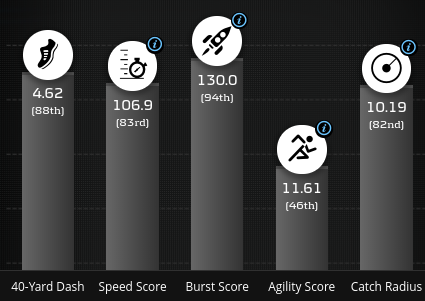 After A.J. Brown, targets are there for the taking in the Titans' offense.

Ultimately, Smith may be best suited as a streamer with Tennessee's preference for the ground game. We have him projected as the TE17 -- right at his ADP. But he's a good enough athlete and has very few roadblocks on the Titans' target totem pole, which is enough to make him an appealing dart throw as the TE17.

It's pretty easy to make an argument for Chris Herndon being too cheap, and I will do so now.

With any late-round player in fantasy, there's a reason they're valued where they are, and realistically, all we're looking for down in this range is a guy who has a chance to get volume and has shown us that maybe he's good at football. Being good is really just the cherry on top, though; volume is what we're after.

Herndon should get targets.

The New York Jets' receiver depth chart reads Breshad Perriman, Denzel Mims and Jamison Crowder. That's not too scary, with Crowder the only for-sure option of the bunch. And while Le'Veon Bell will do his thing in the passing game, there's still plenty of looks to go around.

Herndon had pretty nice numbers for a rookie tight end back in 2018, finishing with 39 receptions, 502 yards and 4 touchdowns. His 2019 campaign was a washout (one game, one catch and seven yards) due to injury and suspension, but last season did show us what a tight end with a pulse can do in this offense as Ryan Griffin was a thing for a hot minute, putting together outings of 22.6 and 19.4 half-PPR points in Week 8 and Week 11, respectively.

Oh, and value offseason reports how you will, but Herndon has twice been spoken of in a glowing light by The Athletic beat reporter Connor Hughes. "To say the Jets can’t wait to get Chris Herndon back in their lineup is a vast understatement," Hughes wrote in early March, and earlier in May, Hughes wrote Gang Green "can’t wait to unleash" Herndon.

As things stand now, Herndon is unlikely to be drafted in standard-sized redraft leagues, but he's a great buy in dynasty and is a savvy cheap pick in best-ball leagues.