We’re into the back half of both the real and fantasy football season with only a few bad weather games thus far. Oh, we’ve had plenty of potential bad contests over the past month of games. Luckily, the fantasy gods have spared us on a few occasions, allowing the tilt to develop on the field rather than from the sky.

However, as we get into November, the heat waves and rain storms will give way to more troublesome weather patterns as the fantasy playoffs draw near.

As we’ll see here in Week 10, new weather conditions will start to crop up in the forecasts, casting doubt on player output week to week. Low temperatures causing cold rain, sleet, or even snow will become another set of variables to consider down the stretch of the fantasy campaign. Luckily, this week has only minor concerns on the slate.

Below are the games with weather concerns headed into Week 9.

The bad weather is apparently following Josh Allen. This will be the third week in a row the Bills’ game will be impacted by wind. But, for the second week in a row, the winds will be light. The maximum wind speed during the first half is expected to be 17 MPH with decaying speeds as the game continues. With winds expected to be at 15 MPH by the end of the game, the concern for any meaningful impact is minimized.

Last week’s performance featured similar conditions. Allen still finished as the QB13 for the week with 17.6 points on 20 passes and 8 rush attempts. Unfortunately, positive game script negated any need for Buffalo to continue throwing on offense as Washington put up just nine points.

The hope is that the Browns fix their issues on offense and force the Bills into a competitive game. Regardless, Cleveland’s defense has been susceptible to mobile quarterbacks. Russell Wilson had 31 yards and a score on the ground against them in Week 6. Lamar Jackson gained 66 yards on 8 carries versus Cleveland in Week 5. If the Bills play to Allen’s strength as a runner, any concerns over the wind should be removed.

Baker Mayfield did play in a game with 20-MPH winds in the Cleveland. However, FirstEnergy Stadium’s height (171 feet) removed much of the effects as seen in the game replay. Week 10’s lessened wind velocity should keep the focus on the offensive-defensive matchups, keeping most of the fantasy assets in consideration.

Cold weather may bring out the old-school football narrative that rushing attempts increase as winter approaches. The only logical thought process behind this one is that the cold makes it harder for quarterbacks to grip the ball. There’s no study corroborating the idea, but the same questions still pop up as the temperature falls. Luckily, the effects are muted, at best. 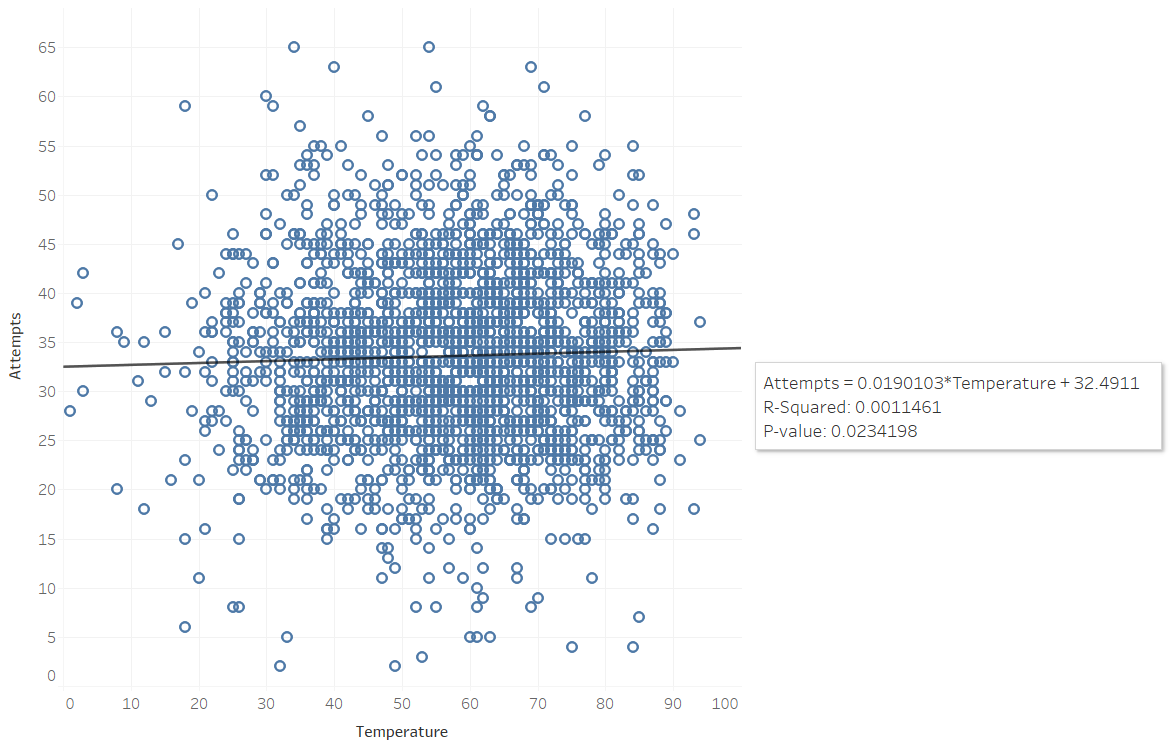 Our wind speed data set was repurposed to isolate pass attempts as a function of temperature. The low R-Squared value (0.02) indicates a weak correlation between the two, rejecting the idea that temperature plays a role.

At the extremes? Sure. We remember the low-scoring, below-freezing playoff game between the Seattle Seahawks and Minnesota Vikings from 2016. Despite the 19 points scored, there were still 50 pass attempts in that game. So unless the weather forecast calls for single-digit temperatures or heavy snowfall, the process for setting our rosters can remain the same this week.