Jake Fromm Is a Better Quarterback Prospect Than You Think

Fantasy Football: Should George Kittle Be the First Tight End Off the Board?

Last season was the perfect situation for George Kittle.

The San Francisco 49ers had a prolific offensive head coach calling the shots, no established alpha-dog receiver, and injuries that funneled targets to the best offensive weapon, which was Kittle.

That culmination of events allowed Kittle to set the NFL record for receiving yards by a tight end, at 1,377. And he could be even better in 2019.

Should he be the first tight end off the board in fantasy football drafts?

The buzz word “regression” has been paired with Kittle’s name for much of the offseason -- and justifiably so. He compiled 857 yards after the catch (YAC) last year, 264 more than the next closest tight end and 270 more than the leading wide receiver.

Many are predicting that this number will come way down, as big plays are rarely sustainable with a 7.8-yard average target depth, per PlayerProfiler. But Kittle is a unicorn.

Kittle ran a 4.52 40-yard dash at the NFL Combine, giving him a 95th-percentile Speed Score. He is one of the most explosive playmakers we’ve ever seen at tight end, and speed like that creates mismatches after the catch. Even if his YAC declines, he is still a good bet to lead his position in the category.

One area where Kittle was a disappointment was in the red zone. Overall, he led tight ends with a 0.57 Reception Net Expected Points (NEP) per target, per our numbers, but that number dropped all the way to -0.04 inside the 20-yard line. So does that mean he just isn’t a good red zone weapon? Of course not.

Kittle is 6-4, 247 pounds and has a 95th-percentile catch radius, per PlayerProfiler. That frame is a dream for a good quarterback. Speaking of which, that is also something that will improve in 2019.

Jimmy Garoppolo is back and healthy for 2019. He is an obvious upgrade over C.J. Beathard and Nick Mullens -- most importantly, he's an upgrade in the red zone.

When the 49ers get inside the 20, the offense should still run through Kittle based on personnel. Running back Matt Breida scored just twice on his 23 red zone attempts for a mark of 0.09 Rushing NEP per attempt, and newcomer Tevin Coleman was even worse in 2018, with a -0.27 Rushing NEP per attempt on his red-zone carries with the Atlanta Falcons.

In addition to the rushing deficiencies, none of the 49ers projected starting receivers are imposing physical threats, so Kittle is likely to lead the team in red zone looks this season.

Reports also indicate that their defacto top wideout, Dante Pettis, is having a rough training camp. Pettis was projected to see a bump in looks after commanding only a 12 percent target share last season, but if he is unable to separate himself from the pack, Kittle would be the likely beneficiary.

Despite Travis Kelce playing with the league MVP at quarterback, Kittle narrowly edged him out in Reception NEP per target (0.57 to 0.51). Kelce also has better competition in his own offense than his West Coast counterpart does in the form of Tyreek Hill, Sammy Watkins, and Damien Williams, meaning his team will have a wider target distribution. Because Kittle is hands down the best option in his passing game, he could pace Kelce in targets this upcoming season.

These are all positive signals for the 49ers' tight end, but do they really justify taking him over Kelce? Our projections give Kelce a solid edge, projecting him for roughly four more touchdowns. With improved red zone efficiency for Kittle and a full season with Garoppolo, that gap could narrow. 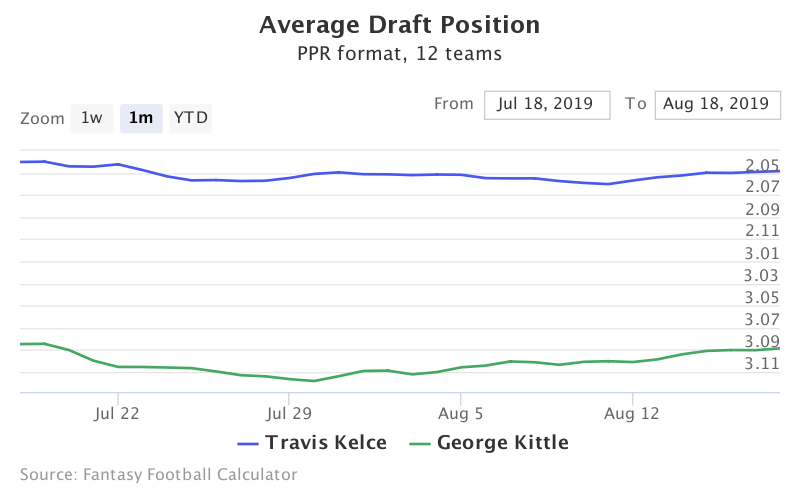 According to Fantasy Football Calculator, Kelce is going in the early part of the second round while Kittle can be had in the late third. When you factor in the difference in price, Kittle becomes even more appealing when compared to Kelce since you can load up on stud running backs or receivers in the first two rounds and then target the 49ers' star in the third.