Sammy Watkins Has Become a Smashing Value in Fantasy Football

Sammy Watkins looked to be one of the greatest receiving prospects of all time coming out of Clemson. He had the size, speed and production at a marquee school that led to a fourth overall selection to the Buffalo Bills in the 2014 NFL Draft.

But one thing he hasn’t had since entering the league is a clean bill of health.

After starting all 16 games in his rookie campaign, Watkins has missed 18 of the last 64 possible contests due to a litany of injuries. These bumps and bruises have hindered him from reaching his fantasy football potential, but all signs indicate that he is fully healthy entering his age-26 season, and he's tethered to the prolific Patrick Mahomes.

If things break right for him in this Kansas City Chiefs' offense, how good can Watkins be for your fantasy squad in 2019?

To start, let’s look at his sophomore season with Buffalo, Watkins’ most prolific season of his career. He saw 96 targets and finished with 60 catches, 1,047 yards and nine touchdowns in only 13 games. This was also his most efficient season, per our metrics, as his 1.68 Reception Net Expected Points (NEP) per catch ranked third among all receivers that caught at least 40 balls that season.

Watkins accomplished that with Tyrod Taylor as his quarterback, showing that he could carry a passing offense on his shoulders regardless of the guy throwing the ball.

Fast forward to 2018 and Watkins found himself in Kansas City with the future MVP as his quarterback. That led to the second-most efficient season of his career, as he added 0.55 Reception NEP per target, which ranked 11th among receivers with 50 targets.

This was undoubtedly buoyed by Mahomes and the KC offense. Mahomes ranked first in Passing NEP per drop back, and Tyreek Hill paced Watkins with a 0.67 NEP per target. This is still a positive signal for Watkins' fantasy outlook in 2019, though. While he wasn't the most efficient receiver on his team, this was the first time in his career that he wasn't the primary deep threat.

The Chiefs have insane speed at every position on the field. As a result, defenses are forced into tough spots, as they need to hang safeties over the top to account for the explosiveness of Hill.

Is there a faster group of starting skill players than the Chiefs?

This has pushed Watkins into a possession receiver role, allowing him to operate underneath on intermediate routes. While he was generally used as a deep threat throughout his career to take advantage of his 90th-percentile Speed Score, per PlayerProfiler's numbers, Watkins saw his average target depth dwindle to 8.1 yards in 2018. That was 94th among receivers.

While those targets weren’t as valuable as deep shots, Watkins thrived in his new role. According to PlayerProfiler, Watkins generated 1.91 yards of separation when targeted, which ranked third among receivers. He took advantage of the separation by putting up 4.5 yards after the catch per target, which was fifth among receivers. Here are the top five:

With every Kansas City starter returning on offense, Watkins should maintain his high-efficiency underneath role, and he still has room for improvement in 2019.

Watkins was Mahomes’ best target in the red zone last season. His 2.02 Reception NEP per catch inside the 20 ranked better than the clips of Hill, Travis Kelce, Kareem Hunt and Damien Williams. If Watkins maintains his health over the full season and repeats his red zone rapport with Mahomes, he could be celebrating in the end zone often.

All three of Watkins’ touchdowns came on red zone snaps last season, as well. With his speed and ability after the catch, he should be able to improve in the touchdown column regardless of his red zone usage.

Ever since the news broke that Hill was not going to receive a suspension, Watkins' ADP in PPR leagues has been in decline, according to Fantasy Football Calculator. He is now going as the WR39 in PPR drafts, which is ludicrous considering his role on the most explosive offense in football. 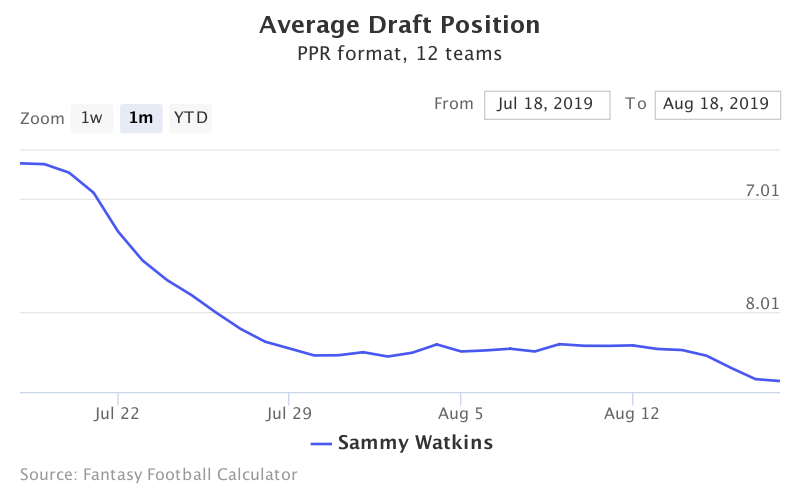 Our projections have Watkins as the WR31, meaning he is a value at his current ADP. If Watkins can post a healthy season with an improved touchdown total, the latter of which is likely with Mahomes throwing him the ball, he could finish as a WR2 (top-24) in 2019. We should be buying Watkins at his falling price.