Is There a Tampa Bay Running Back Worth Drafting in Fantasy Football?

The short-form version of this article answers the question of draftable Tampa Bay Buccaneers running backs with a couple of simple "If This Then That" flowcharts.

If Tampa Bay trades for or signs someone like Melvin Gordon before the start of the season, then the answer is "Yes, there is a Bucs running back worth drafting." If they enter the 2019 season with rushers currently on their roster, the answer is a clear "No."

When considering late-round running back value, however, a deeper dive is necessary to determine whether there is any juice to be squeezed out of Tampa Bay’s two primary ball-carriers, Ronald Jones and Peyton Barber, and also if there is anyone else on the roster worth considering as an end-of-the-draft deep flyer.

The Bucs' 2018 second-round pick, Jones had what can only be described as an abysmal rookie campaign a year ago. After reports surfaced of poor work ethic and poor practice habits before the season, the former USC standout managed only 77 total yards on 30 touches (23 rush attempts), battling injuries and appearing in only nine games.

In terms of our metrics, specifically Net Expected Points (NEP), which you can read more about in our glossary, things were ugly.

But at least Jones accounted for only six percent of Tampa Bay’s overall attempts.

Barber, on the other hand, was the Bucs' clubhouse leader with 62% of the team’s carries. Barber’s Rushing NEP per carry in 2018 was a retina-burning -0.11 on 234 rush attempts, which checked in dead last among the 14 runners with at least 20-plus carries. In fact, that total Rushing NEP of -25.76 is the seventh-worst among all running backs with at least 225 carries in a season since 2010. Barber essentially took three and a half touchdowns off the board with his rushing last season.

Our old friend Andre Ellington is back in the NFL, seemingly to play a third-down role for the Bucs. Ellington, who recently turned 30, was out of the league in 2018 after three lackluster years with the Arizona Cardinals and Houston Texans. Ellington averaged over 42 receptions per season under Bruce Arians in 2013 and 2014 before David Johnson entered their lives. Perhaps Arians hopes he can lead Ellington to rediscover some of that receiving magic as the only back on the roster who has seen substantial targets in the NFL.

Also on the current roster is something called a Dare Ogunbowale, who apparently returned seven kicks for Tampa Bay last year. Undrafted free agent rookie Bruce Anderson also fills a line on the depth chart. He is a running back from North Dakota State, an FCS school. That’s probably all that needs to be said about that.

Needless to say, it wasn’t the running back depth that enticed Arians to come out of retirement on a four-year deal to coach the Bucs. The new Tampa Bay coach has a recent track record of establishing the passing game to set up the passing game. One look at the names of pass catchers on this roster surely sent Arians rushing out to buy some red and pewter Kangols.

After Arians began drinking the passing game Kool-Aid before the start of the 2016 season, his Arizona Cardinals finished third (2016) and second (2017) in total pass plays in the NFL and finished third (2016) and eighth (2017) in pass-to-run ratio. Arians’ quarterbacks and offensive coach on those 2016 and 2017 Cardinals teams? Byron Leftwich. Who is the new offensive coordinator for Tampa Bay? Byron Leftwich.

In terms of transitioning to his new team, Arians could not be walking into a better situation to mesh with his style of play.

The 2018 Buccaneers ran the 3rd-most passing plays and attempted the 11th-fewest rushes in the league. Tampa Bay showcases two wide receivers -- Mike Evans and Chris Godwin -- who both finished in the top 25 in total Reception NEP, as well as a tight end O.J. Howard, who finished top 10 at his position.

With that wide a gap between the proven talent levels of the pass catchers and the running backs, you can safely bet on Arians and Leftwich flinging the ball all over the field in 2019.

A Quarterback With (Crab) Legs

Alright, no more making fun of Jameis Winston. He only eats Ws now, not crab legs. Winston, in his four years in the NFL, has proven to be an effective rusher when given the opportunity. He averages slightly more than 47 rush attempts per season, including 49 in 2018 despite only playing in 11 games (nine starts).

In those 11 games, his 49 runs accounted for almost 12% of his team’s total rushing attempts on the season, the 11th-highest number among all NFL quarterbacks a year ago. If we give Winston 16 full games and extrapolate his total into a full season, he would have tallied 71 attempts, or almost 19% of his team’s total, which would have trailed only Lamar Jackson, Cam Newton, and Deshaun Watson.

We haven’t seen the goal-line rush attempts lately that led to six rushing touchdowns in Winston's rookie season, but rest assured he will be taking opportunity from the running backs on his roster when the play is there.

The factors above don’t even begin to address that the Buccaneers had the 31st-ranked run-blocking line in the league last year, according to Football Outsiders. They also don’t address that the Bucs drafted no offensive linemen and brought in no free agent offensive linemen this spring. Even if Tampa Bay had Warrick Dunn and Mike Alstott walking through that door, the team wouldn’t be setting them up for any kind of success.

Of course, cost matters. Per Fantasy Football Calculator, Jones and Barber are trending in opposite directions -- with each coming off the board in the 9th-to-11th-round range in 12-team PPR formats. 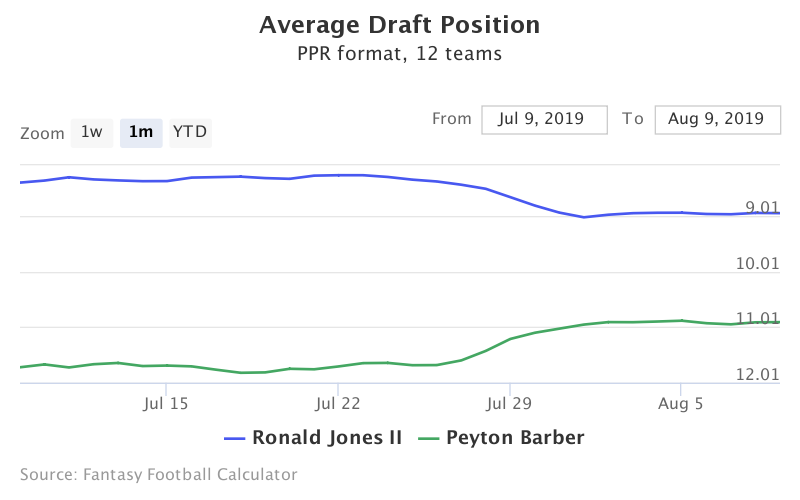 But in that range, more effective alternatives with higher ceilings include Royce Freeman or Kalen Ballage. The inefficiency, system, and horrendous offensive line combine to form a running back situation in Tampa Bay that screams stay away. Perhaps in an extremely deep PPR league, Ellington might be a worthy late-round flyer, but at that stage of the draft, it’s desirable to shoot for a high ceiling instead of a low floor.

Unless we hear that Barber or Jones is going to get a massive rushing market share, this is a situation to avoid in 2019.