Kyle Dvorchak  —  @kyletweetshere Jul 5th, 2019
Share on Facebook Share on Twitter
Running backs might not matter much in the NFL, but there's a pile of them worth considering with the top pick in fantasy football. Ezekiel Elliott stands out as one to avoid in that spot.

Ezekiel Elliott is in consideration as one of the “Big Three” when it comes to the first overall pick in drafts, being taken at an average pick of 3.0 since June 1st according to Draft.com's average draft position (ADP) data, and also going first overall his fair share of the time. Although Zeke isn’t on the same level as Saquon Barkley or Christian McCaffrey as a receiver, he deserves to be in that conversation even in point-per-reception (PPR) leagues, which is the format I'll be focused on in this article.

In three years as a pro, Zeke has led the NFL in rushing twice. Last season he finished as the fifth-highest scoring running back in fantasy football. Can he finally make the push to the number-one spot?

What We Want From the First Overall Pick

When choosing the first pick, look for the highest floor. That’s about it. In best ball drafts last season, the first four rounds produced more players with below-average win rates than above. This trend holds true in the two previous years as well.

This simple way of looking at pick value says one major point about early selections: There are more land mines than gold mines. Avoiding bad picks should be the highest priority.

Raw touches are a great starting point for looking at what we can expect a player to produce. Efficiency (like touchdown rate) is highly volatile. Volume carries over from year to year more consistently and does a better job predicting fantasy points.

Zeke dominated the NFL in combined rushes and receptions. He had 381 total touches in 15 games. Barkley trailed by 29 touches but played an additional game. No other back came within 50 touches.

Getting more granular with volume is important though. A single target will result in more fantasy points, on average, than a single rush, regardless of scoring format. Goal line and red zone touches are also more valuable.

Expected Points (EP; courtesy of RotoViz) estimates the fantasy point a player should have scored given the down, distance, and other factors surrounding each touch they received.

This shows a clear top-five backs. First, let’s rule out Todd Gurley. With Gurley's health in doubt, his downside is staggering. He's simply not worth the risk he presents should considering the likelihood he misses numerous games or his volumes is scaled back severely.

The chart also shows how far ahead of the pack Barkley was. Because he came close the Zeke in total touches and caught 14 more passes, Barkley appears to be backing up his 1.9 ADP. Zeke is taken on average at 3.4 overall (per Fantasy Football Calculator). 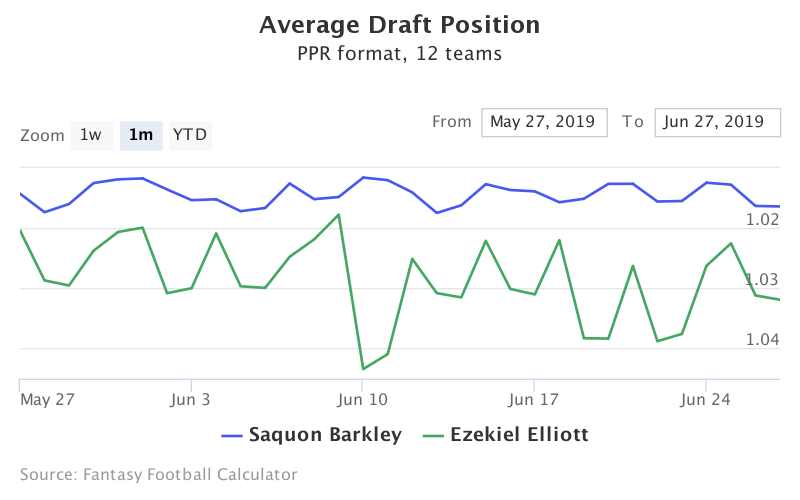 It also shows that McCaffrey should be receiving (pun 100% intended) some love at the top of drafts as well. Zeke carried the ball 80 times more than CMC but the power of passing is on McCaffrey’s side. Elliott’s 30-catch deficit dropped him 3.3 expected points below McCaffrey.

Alvin Kamara and David Johnson were the only two other backs to top 250 expected points. Neither of them crested 300 but the tandem set themselves apart enough to merit some consideration at the top of drafts.

The second variable to examine for a running back’s forecast is his offense. Look no further than the tales of Johnson and Gurley. Johnson was trapped on a Cardinals offense that came in dead last per numberFire’s offensive Team Analytics. Gurley, on the other hand, played in the dynamic Ram’s system and led all backs in points per game.

A back is intrinsically tied to the team he plays for. Targeting one with an anchor for an offense is a potentially disastrous risk.

Only Johnson looks to stand out as a back that must be avoided due to offense, but these stats are also from last year. The Cardinals drafted a prolific college passer in Kyler Murray. They also hired the harbinger of the Air Raid offense in Kliff Kingsbury as their head coach. The 2018 season will have little bearing on the Cardinals’ 2019 outing.

Kamara may be the best bet of our five remaining backs to have the fewest touches but he’s also on the best offense. The New Orleans Saints overall offensive rating was nearly double that of the second closest team on this list. What Kamara lacks in a volume floor, he makes up for with a scoring floor.

The Carolina Panthers, Dallas Cowboys, and New York Giants all fell into the 15 to 20 range. None were toxic offenses but none made waves either. Little has changed for the Cowboys and Panthers since last season.

The Cowboys will get a full offseason and regular season of Dak Prescott and Zeke. The Panthers ended the season with a broken down Cam Newton due to a shoulder injury. Now, every indication is that he is progressing quickly and the injury won't be a factor during the season. Both of these offense are primed for a minor uptick in efficiency next season.

Barkley and the Giants another story. The Giants were a respectable offense in 2018, finishing just inside the top-half of the league. They then went on to trade Odell Beckham and replace him by signing Golden Tate. With Eli Manning looking older by the game, Giants GM David Gettleman selected Daniel Jones to be the heir to the Manning throne.

Statistics like Jones’ 6.9 adjusted yards per attempt are major red flags on his profile. There are many arguments (conveniently found here) for keeping Jones out of the top-five QB prospects this year. With the Giants appearing to have two quarterbacks well below starting-caliber contending for reps, Barkley may be in trouble. If anyone will get the David Johnson treatment this year, it will be Barkley.

With Gurley and Barkley out of the running (never not intending these puns), we’re left with four worthy candidates. There are still lingering concerns.

With Johnson, it’s the threat of the unknown. The new-look Cardinals appear to the next great offense, but overconfidence in something completely new to the NFL would be foolish. Arizona gave up 52 sacks last season. Even though they lost a number of lineman to injuries, their big men won’t be great this season.

Heading into last season, they were the numberFire's 30th ranked offensive line. This was before a slew of injuries. Since then, they acquired Marcus Gilbert, who has played 12 games in the last two season, and J.R. Sweezy. Sweezy was only the 71st ranked guard last year according to Pro Football Focus.

This offense line doesn't look like it will see much improvement, and that could be a major road block for Kingsbury's new-look offense.

Finally, there’s Zeke, who may be his own worst enemy. Last season, he was given a six-game suspension. This offseason, he's already been interviewed once for an incident at an music festival. He won't be suspended for this situation but he has been suspended before and ran the risk of it happening again recently. Patterns of behavior like Zeke's are dangerous to buy into early in drafts, even if he does have elite volume.

Who Is the First Pick?

That’s an article for another day. More signs point to McCaffrey than any other back but Kamara has a legitimate argument to be the first player taken. If you have a high level of confidence that the Air Raid and Murray will translate to the NFL, David Johnson is a fringe candidate for the spot as well.

Zeke however, is not. He isn’t the best in the volume category, doesn’t play on a dominant offense, and has more non-football related risk than any of the top backs.