Akash Bhatia  —  @AkashBhatia24 Mar 13th, 2019
Share on Facebook Share on Twitter
A stunner went down last night as the Giants traded away star receiver Odell Beckham Jr. to the Cleveland Browns. What impact does Beckham's departure have on the New York Giants?

Love him or hate him, there's no doubt that Odell Beckham is one of the most gamebreaking talents at the wide receiver position.

Odell Beckham Jr. 's 29 missed tackles forced (on receptions) this season is the second-most of any receiver since 2007.
— Scott Barrett (@ScottBarrettDFB) January 3, 2017

But now that Odell is no longer a member of the New York Giants, what does that mean for the team, from both a fantasy and betting perspective?

Believe it or not, the Giants' offense was actually reasonably efficient last year, ranking 15th in Passing Net Expected Points (NEP) and 8th in Rushing NEP.

There's no question that without Beckham, we can expect the 2019 version of the Giants to perform worse than that on offense.


Odell Beckham is one of the most valuable non-QBs in the NFL. Eli Manning and the #Giants splits with and without Beckham on the field have been stark (2015-17): pic.twitter.com/cxTUPiYrkz
— Graham Barfield (@GrahamBarfield) August 27, 2018

And it's not like Eli Manning was lighting it up. Among quarterbacks with at least 400 drop backs, only Blake Bortles, Sam Darnold, and Josh Rosen ranked worse in Passing Success Rate, which measures the percentage of drop backs on which a player generates positive expected points.

Without Beckham, whatever was left of Manning's fading fantasy value is rapidly being erased. It's doubtful he even enters the streaming conversation during the season at this point, and he shouldn't be drafted outside of leagues that start more than one quarterback.

Still, this doesn't mean the Beckham trade is bad for everyone on the Giants. In fact, there are two clear winners: Sterling Shepard and Evan Engram.

Beckham has averaged 10.5 targets per game in his career; that's good for 168 targets extrapolated out to 16 games. Anytime a player who vacuums up such a large share of targets leaves an offense, other players stand to benefit. 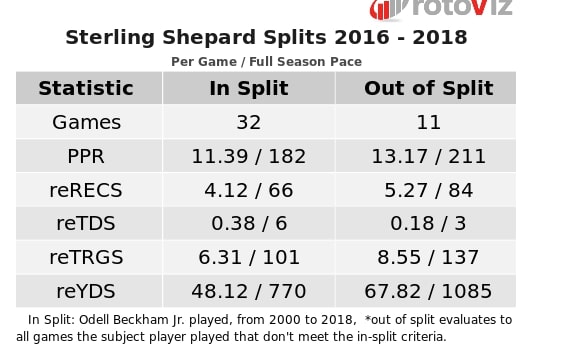 Since volume is king in fantasy, it's no surprise to see that the increased targets Shepard has seen without Beckham has led to increased fantasy production. And we get a similar trend for Engram: 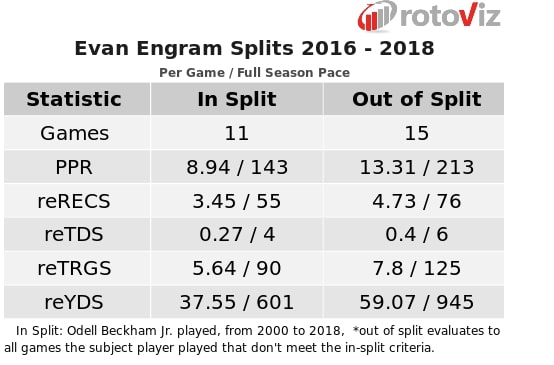 While both players efficiency on those targets may take a slight hit without Beckham commanding the attention of the opposing defense, the increased targets and yards is what to focus on here. Engram in particular is still just entering his third-year at a position notorious for slow development, so it's entirely possible he takes a big step forward next year.

Without Beckham, Shepard is a safe WR3, and Engram is entrenched in the middle of the TE1 tier.

It's unclear the extent to which this will affect the Giants win total, but the obvious inclination is to bet the under depending on what number comes out. As mentioned before, the Giants have been one of the worst teams on offense without their superstar wide receiver over the past few years.

However, the loss of Beckham goes beyond his ability on the field. It nearly doubles the percentage of the salary cap that will be tied to players not on the Giants roster. That obviously limits the flexibility a team has in order to sign quality players to contribute this season.

The Giants are paying nearly $33.7M to nine players who aren’t even playing for them this year. https://t.co/3t8jAAtckM pic.twitter.com/2A2qnIOesH
— Brandon Lee Gowton (@BrandonGowton) March 13, 2019

The trade is also a clear signal from the organization that this is expected to be a retooling year. Perhaps that means taking a rookie quarterback early instead of a stud defensive player. Maybe that means playing younger, less experienced guys as the season winds down in November and December to see what the team has moving forward.

Because this is a high-profile trade, it's possible that Vegas anticipates all of this and opens with a low number, expecting public action on the under. Unless the total opens aggressively low, though there could still be some value on the under. Remember that this is a team that lacked talent on defense last year, and that was before they lost key players such as Olivier Vernon and Landon Collins this offseason.

The Giants are currently +2200 at FanDuel Sportsbook to win the NFC Championship. Obviously, this is not a bet I would recommend.