What is The Report? It's a comprehensive, statistical look at how teams and players are functioning offensively, with notes as to what it all means for the fantasy football future. Each week, The Report will feature charts on team play-calling tendencies, player usage close to the end zone, deep ball rates, and so much more. With added commentary, the purpose is to not only hand you information, but provide actionable information to crush both season-long and daily fantasy football.

The Ravens keep running. In the chart, you can see that they've got an overall pass-to-rush attempt ratio of 1.10, which is one of the lower marks in the league. But since Lamar Jackson took over, their ratio has actually been 0.51. They've been running the ball twice as much as they've been throwing it. That's by far the most run-heavy approach in the league -- Seattle has a 0.82 pass-to-rush attempt rate, and they're the least pass-friendly team in football. All of this has essentially ruined the fantasy value for Baltimore pass-catchers.

Cody Kessler hasn't been the answer in Jacksonville. With Kessler under center over the team's last three games, the Jags have averaged fewer than 10 points per contest, and their yards per drive rate has dipped by over eight yards. That makes the Dolphins a very, very viable streamer this week.

The Falcons have passed the Steelers in pass-to-rush ratio in neutral game scripts, and we may see a pass-friendly approach this weekend at Carolina. Atlanta's down to Tevin Coleman as their only relevant, healthy back, and while the Panthers looked fine against the Saints on Thursday night, they've struggled against the pass this year.

Not much has changed in the Net Expected Points chart week over week. The Falcons now own numberFire's worst-rated secondary, while Baltimore is pretty far in front of the pack. Meanwhile, Chicago and Houston have been strong against the run. That makes me nervous about starting any 49ers or Eagles back this week.

The chart below displays the raw number of yards and the percentage of yards allowed by pass defense to wide receivers, tight ends, and running backs. 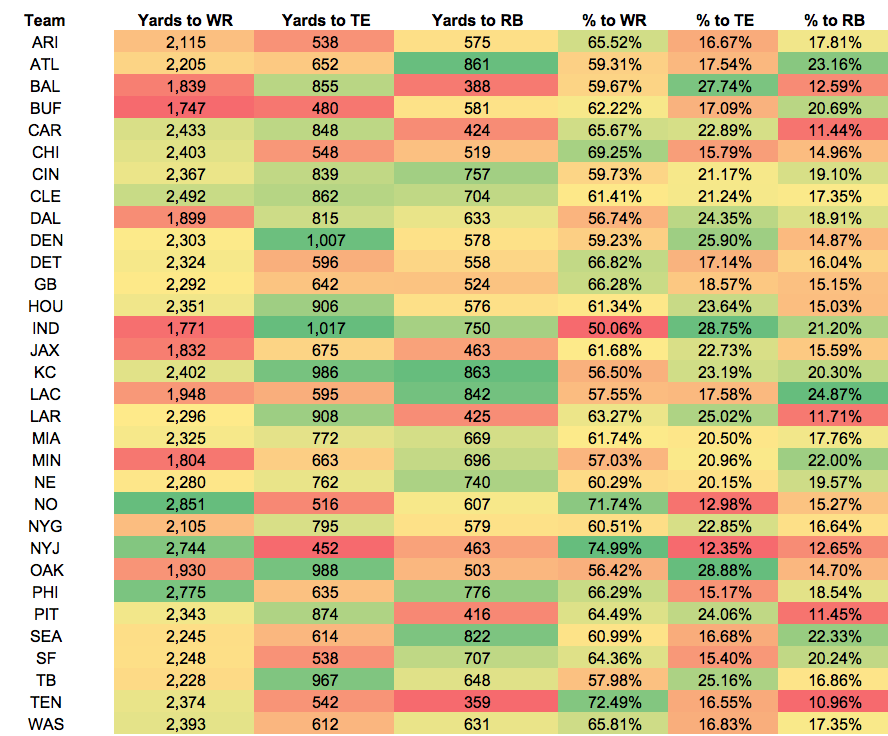 The top quarterback streamer this week may be Nick Foles. Part of that is because ownership percentages continue to be very flat at the position, limiting our true streaming options, but Foles is also in a low-key good matchup. The Texans are average against quarterbacks in fantasy points against, but they've only faced one quarterback this season who ranks in the top-10 in points per game at the position. That's Andrew Luck, who scored 35.7 and 23.6 fantasy points against the Texans in his two outings.

Meanwhile, as noted above, Houston can stop the run well. That may force the Eagles to throw a bit more. And that's not necessarily a bad thing -- one matchup that Philly could exploit is at tight end, as 23.6% of the Texans' receiving yards allowed have gone to tight ends this year, the ninth-highest rate in the league.

I'm intrigued by Kenneth Dixon this week. While Gus Edwards has been out-touching him in the Ravens backfield, Dixon actually played more snaps than Edwards in Week 16. Dixon's snap rate has now risen from 21% two weeks ago all the way to 52% this past weekend. And he's a more capable pass-catcher, which could be big against the Chargers -- no team has allowed a higher percentage of receiving yards to running backs this year. We saw that in action last week versus Damien Williams.

Heading into last week, the Saints were first in the league in percentage of receiving yards allowed going to wide receivers. This week, that's changed. After getting torched by DeAndre Hopkins, the Jets have become arguably the best matchup for wide receivers, which is good news for those of you needing some Davante Adams help in your fantasy championship.

Evan Engram had a pretty big Week 15 with 8 catches on 12 targets, and his matchup this week is nice against Indy. The Colts have seen 28.8% of their receiving yards go to tight ends, which is the second-highest rate in the league. And no team has allowed more receiving yards to the position.

If you need a tight end streamer, Matt LaCosse could be it. The Raiders have allowed the second-most fantasy points to tight ends this year, and 28.9% of their passing yards allowed have gone to tight ends, marking the top rate in the league. LaCosse saw six targets in Week 15, and according to Pro Football Focus, he ran 32 routes, seventh-most at the position last week. The position is a dumpster fire, but the matchup is there for LaCosse.

All numbers below reflect yards per play. 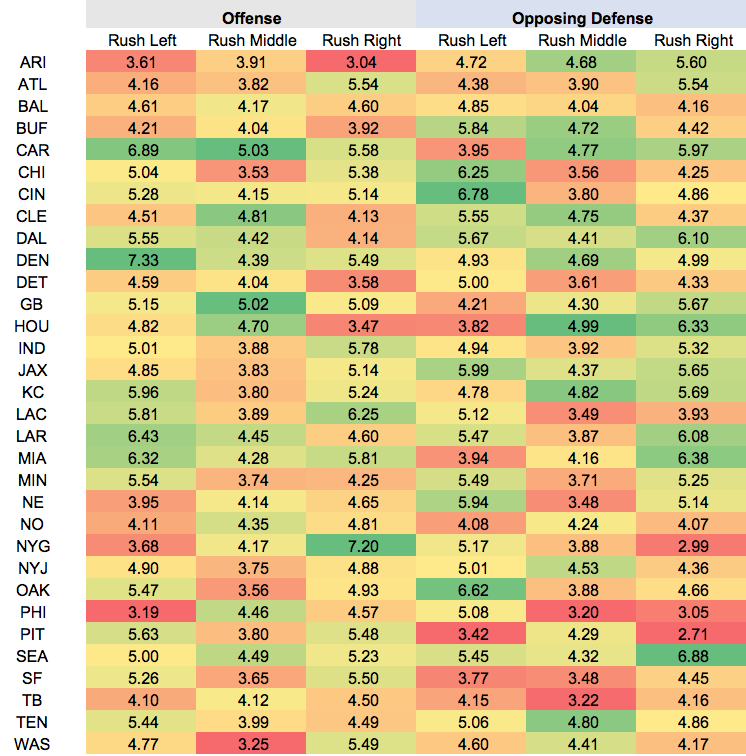 According to numberFire's expected points model, no team has allowed a higher Success Rate (percentage of positive expected point plays) to running backs through the air than Cleveland. The Bengals are banged up offensively, but Joe Mixon continues to see a ton of work -- he's carried the ball 53 times over the last two weeks -- and he's got the receiving upside in this matchup to come through with a big performance.

On the other side of that matchup is Nick Chubb, who should have zero trouble this week running against the Bengals. Not only are the Browns favorites, which could generate a nice positive game script, but Cincy's given up the second-highest Success Rate to opposing backs this year on the ground. And only two teams -- Kansas City and Oakland -- have been less efficient at stopping the run on a per-rush basis.

You've got to love Marlon Mack's spot this week. Prior to trading Damon Harrison, the Giants were allowing 3.9 yards per carry to opposing running backs. Since, that number's jumped to 4.5, and the G-Men have surrendered five top-10 running back performances in seven games played. As home favorites, the Colts should see a positive script, benefiting Mack tremendously.

With Aaron Jones sidelined early against Chicago on Sunday, Jamaal Williams handled every single running back carry while playing almost 87% of the team's snaps. If he's on your waiver wire, you've got to snatch him up this week, even if it's to block your opponent.

Instead of giving the ball to Kenyan Drake after Frank Gore was injured in Week 15, Miami opted to feature rookie Kalen Ballage. Drake only played about 53% of Miami's snaps on Sunday, and he was out-attempted 12 to 1 versus Ballage. We should probably assume Ballage will be featured against Jacksonville this week as a result.

Robby Anderson hit his highest snap rate of the season on Sunday, and he's now seen 7, 7, and 11 targets over his last three games. The Packers have a bottom-10 secondary according to numberFire's expected points model, making Anderson a very viable option this week.

Nick Foles has much stronger numbers when targeting Alshon Jeffery compared to his other pass-catchers, including an 11.1 yards per attempt rate. When looking strictly at this 2018 season, Jeffery has two games where he's hit the 100-yard mark. One happened this past week with Foles, and the other was in an overtime game where he essentially played an extra quarter. Against a beatable Texans secondary, Jeffery is in a good spot this week and should be in your lineup.

Adam Thielen has struggled, at least when you compare his production to where he was at across the first half of the season. Since Week 8, Thielen has just one 100-yard game after starting the season with eight consecutive ones. What's happened? Well, it could be partially due to his work in the slot. Since Week 8, 51.8% of his snaps have come from the slot, and he's seen 23 of his 47 (48.9%) targets from that area of the field. That's all according to Pro Football Focus. From Weeks 1 through 8, that slot snap rate was 61.9%, and 59 of his 98 (60.2%) looks were in the slot. So Thielen's seeing fewer slot snaps and, in turn, he's also getting fewer targets. He's still someone you need to start, but that helps explain his "struggles".

Guys, O.J. Howard hasn't played football for a month, and he's still a top-10 fantasy tight end. That's how bad the position has been.

Since Week 11 -- which is when Geoff Swaim was injured -- Blake Jarwin has dominated the routes run at tight end for Dallas. According to Pro Football Focus, over the last four weeks, Jarwin's run 109 routes, when the next-closest Cowboys tight end has 55. That's led to back to back seven-target games for Jarwin.

Nick Mullens is a fun story, but he's getting a good bit of help from his teammates. He's throwing it deep on fewer than 12% of his passes, and just 21% of his yards have come on those types of throws. The conservative approach has worked, but it shows that he's still limited the offense overall.

Russell Wilson has had a really interesting season. He's been unbelievably efficient in a run-first offense, and while he's throwing it 15-plus air yards on 20.4% of his throws, he's getting the most out of those tosses. He ranks eighth in deep-ball rate, but he's fourth in percentage of yards coming from those tosses. It's just another example of Wilson getting the most of his throws this year.

With Frank Gore's season now over, he's become just the 10th player in NFL history to rush for 700 or more yards without finding the end zone on the ground. Among the 11 instances of this happening (one player, Joe Washington, did it twice), Gore's 722 rushing yards ranks eighth on the list. It was truly an outlier season touchdown-wise for Gore.

Ezekiel Elliott has scored nine times this year, but he actually should have two to three more touchdowns. He's essentially the only elite running back who is underperforming in the touchdown column. Perhaps some positive regression hits this weekend in a plus matchup against Tampa Bay.

Brandin Cooks has officially passed Julio Jones as the most unfortunate touchdown scorer at wide receiver this year.