There are only five weeks left in the regular season, and there have been plenty of ups and downs. We've seen some truly great and not-so-great performances. Clever fantasy football owners are looking for opportunities to buy low and sell high on potentially unsustainable performances. We spend the entire off-season predicting what will unfold once the action starts, but we can now finally react to actual data and information.

By detailing both negative and positive regression candidates, the hope is that we will uncover some of the truths behind what we've seen so far this year.

Over the last four weeks, Ben Roethlisberger of the Pittsburgh Steelers clocks in as QB2 in fantasy thanks to some big single-game performances. But is that sustainable?

Ben cruised to a huge fantasy finish in Week 12 on the back of 462 passing yards in a loss to the Denver Broncos, and he fired five touchdown passes just a few weeks ago.

Unless his efficiency picks up, expect the Steelers quarterback to fall back in those fantasy rankings.

Leonard Fournette definitely can't complain about his workload -- in the last four weeks, the Jacksonville Jaguars is tied for second in the league in carries (70), and he has punched in three of those runs for touchdowns.

It's also clear to see that even with a ton of volume, he's not the most efficient runner. Among the 44 running backs with 80 or more carries, Fournette finds himself in the middle of the pack in Rushing NEP per carry (23rd with a mark of 0.00), and over those 70 carries in recent weeks, he's averaged a mere 3.47 yards per carry.

After a one-game suspension, Fournette will need to sustain his fantasy relevance with some improved performance quickly, and with a quarterback situation in disarray, things may get tougher for the Jags running back.

Adam Thielen recorded back-to-back sub-100 yard receiving games before snapping that drought in a Week 12 win over the Green Bay Packers. Does that mean the Minnesota Vikings star wide receiver is back on the rise?

While the passing volume seems like a given, as the Vikes rank fourth in pass-to-run ratio (1.98), there's cause for concern. The Vikings play at a bit of a plodding pace, ranking 19th in situation-neutral pace (31.35 seconds per play), and they've got a tough date on their hands this week with the New England Patriots, who rank 19th in fantasy points allowed to opposing wide receivers.

Fantasy's WR2 could face another tough matchup against a defense that hasn't allowed a 300-yard passer since Mitchell Trubisky of the Chicago Bears five games ago, so expect the tough sledding to continue.

Fantasy's TE3 has become a touchdown scoring monster, now owning 11 scores on the year, which leads all NFL pass catchers. After scoring two more this past week, Ebron is now averaging one score every four receptions. That's good -- but likely unsustainable.

For some reference points, other top tight ends like Zach Ertz and Travis Kelce are scoring at a far less prodigious clip, crossing the goal line every 9.57 and 14.00 catches, respectively. And to make matters worse, the Indianapolis Colts take on the Jaguars in Week 13, who own the 12th-ranked pass defense (per our metrics) and have held opposing passers to under 200 yards three times in the last six contests.

With Jack Doyle heading to the Injured Reserve, Ebron could see a few more pass attempts and help sustain his fantasy relevance -- but if that doesn't pick up quickly, he should be falling back fast.

Despite ranking as only QB12 over the last four weeks, Baker Mayfield and the Cleveland Browns are clearly trending up, and they seemed to have some extra motivation last week facing their former head coach.

Hue Jackson went for the hug and Baker hit him with the “we’re just friends” handshake pic.twitter.com/khycq8Vhik
— Will Brinson (@WillBrinson) November 25, 2018

Mayfield now owns two-plus touchdown passes in each of his last five games, and he put on a clinic in Week 12's beat-down of the Browns, with 35 points scored.

Peeping his Average Intended Air Yards (IAY), or the average distance of throws per pass attempt, Mayfield is taking plenty of deep shots with a mark of 8.9 IAY. And last week's passing chart is a thing of beauty: 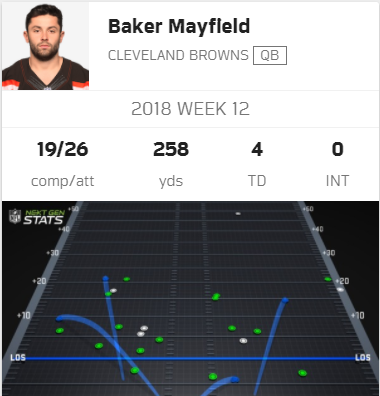 Mayfield's nine deep throws, or passes traveling 16-plus yards, show the Browns aerial attack is for real, and the Browns signal-caller should find himself in the top tier of quarterbacks quickly.

Last week, Christian McCaffrey found himself on the negative regression candidates list, so how did things change so quickly with the Carolina Panthers star running back?

It's all about that volume. McCaffrey, fantasy's RB5, grabbed 28 all-purpose touches last week on his way to topping both 100 yards rushing and receiving. Over his last four games, McCaffrey's low-water mark of 19 touches and 110 all-purpose yards signals he's a major part of this Panthers offense, regardless of game script.

And he's been effective with that volume, too. His 71 receptions are the most among running backs and tied for ninth in all of football, and he ranks 13th in Rushing NEP per carry (0.06).

Next up is a Tampa Bay Buccaneers defense that's allowed 30.7 points per game (second-most in the league), so expect a large Week 13 effort from CMC.

He may only be RB15 so far this season, but after smashing the Steelers last week for 110 yards and a score on only 14 carries, it appears Phillip Lindsay is for real, and his work load is trending it's way up.

Lindsay has been extremely efficient, ranking sixth in Rushing NEP per carry (0.16) among running backs, and he takes aim at a Cincinnati Bengals defense that's been getting torched by opposing runners. In recent weeks, they've been popped by Nick Chubb (84 yards and a score), the Baltimore Ravens (267 team rushing yards), and the New Orleans Saints (244 rushing yards).

Look for Lindsay to continue his ascent with another solid Week 13 performance.

The Detroit Lions offense will take a major hit with Marvin Jones heading to Injured Reserve, but that only lines up Kenny Golladay for a bigger work load.

Without Marvin Jones (knee) over the last two weeks, Kenny Golladay has been targeted on 30% of his routes per @NextGenStats. That rate would tie Julio Jones for the league-lead among wide receivers.
— Graham Barfield (@GrahamBarfield) November 26, 2018

Fantasy's WR23 is ready to smash over the last five games of the season, and he squares up with a Los Angeles Rams defense that's allowed the sixth-most points to opposing wide receivers in the NFL (33.3 per game).

The Lions, who rank eighth in pass-to-run ratio in the league (1.71), could be funneling a pile of passes to Golladay down the stretch.