Jim Sannes  —  @JimSannes Jun 28th, 2018
Share on Facebook Share on Twitter
Running backs are more expensive than they have been in years past, making high-end wide receivers cheaper commodities in fantasy drafts. But is the opportunity cost at running back too great to pass on them?

"What is dead may never die," is proof that those on the Iron Islands in Game of Thrones love themselves some fantasy football.

The phrase -- allegedly -- refers to the drowned god and their religion's firm belief in resurrection. It's a phrase uttered at prayers, baptisms, and sacrifices, honoring the deity they worship.

Just two years ago, there were only 10 total running backs being drafted within the first 2 rounds of 12-team, PPR drafts, according to Fantasy Football Calculator. The market was reacting to a 2015 season that was simply wretched for running backs as Le'Veon Bell, Eddie Lacy, and Jamaal Charles -- all top-five overall picks -- fell flat for one reason or another. The position was officially dead.

What is dead may never die but rises again, harder and stronger.

Whenever running backs become more expensive, wide receivers must inherently become cheaper. And we've seen that happen this year with studs such as Julio Jones, Michael Thomas, and A.J. Green all being available in the second round. That provides us with an incentive to deviate from the crowd and snatch up all the top-end wide receivers we can.

But is that the correct strategy? After all, every time we draft a wide receiver, we are not drafting a running back. There is an opportunity cost here, and if the running back well is drying up sooner, we do need to account for that. Can we afford to do the opposite of the public?

We're going to try to answer that today. By looking at the ADPs of running backs and wide receivers and comparing them to numberFire's season-long projections, we can quantify this opportunity cost and see whether or not we should follow the crowd and get our running backs early or take advantage of depressed prices on wide receivers.

With the way things are going in fantasy football drafts in 2018, are we forced into taking running backs early? Let's check it out.

The biggest concern we should have in forgoing early-round running backs is that if we pass on them early, we may not be able to find any palatable replacements late. This makes sense both historically and anecdotally.

In Gdula's study, the specific cutoff he made was the top 30 running backs in drafts each year. In 2018, the 30th-ranked running back is coming off the board in the middle of the sixth round (65th overall pick) in 12-team PPR drafts, according to Fantasy Football Calculator, and that doesn't give you much time to get the goods on your roster.

But even that 30th-ranked running back pales in comparison -- from a projections perspective -- to the backs coming off the board early on.

The chart below compares the season-long projections (based on full-PPR scoring) and ADPs of both running backs and wide receivers for 2018. The running backs are in blue, and the receivers are in orange with the x-axis representing the overall pick in the draft. It doesn't take long for things to fall off at running back. 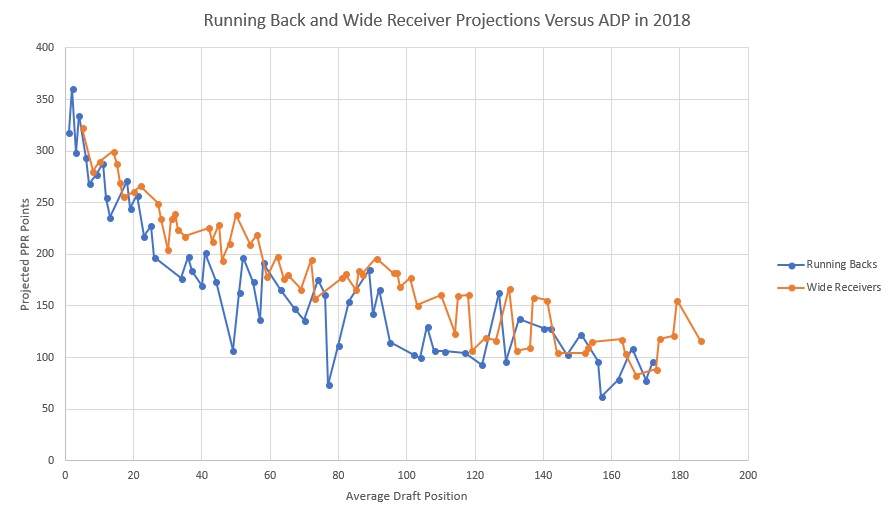 Even though the top-end running backs outscore the highest-drafted wide receivers, the wide receivers are projected to score more points at almost every other point on the chart. This hints that the falloff at running back is greater than that at wide receiver.

To illustrate this better, we can look at the average projections for each running back and wide receiver taken in each round throughout the draft and quantify the falloff. The "percentage decrease" columns measure the difference in projections from players at that position in one round compared to the projected output of players at that position in the previous round. If the falloff is lesser at one position than another, then we could justify waiting on that position and snagging a player there later on. That seems to be the case at wide receiver.

The takeaways here are similar to what we saw in the initial chart. First-round running backs and first-round wide receivers have similar projections. But things take a nosedive at running back after that while wide receivers remain flatter. The percentage decrease at the two positions is smaller at wide receiver for rounds two through six. That is significant.

If you take a running back in the fifth round, that player will be -- on average -- projected to score 46.1% fewer points than a first-round player at the position. A fifth-round wide receiver's projection is just 29.0% lower than a first-round receiver.

In the later rounds, things get flatter for running backs, and we should note that as well. The difference between a fifth-round running back and one in the eighth round isn't huge. Conversely, at wide receiver, the falloff from round five to round six is one of the largest on the board. This seems to be the most fruitful area to take a wideout and hold off on the running backs.

Again, this is merely what the projections say, and projections are far from an exact science. But they fit with the data that Gdula found in practice historically, and when both the past and future data says we want early-round running backs, it's hard to deviate from what the public is doing.

There will never be a universal strategy to come from looking at a practice such as this. But we can have some actionable takeaways for our drafts. Let's go through some of those here.

Second, there is a spot in which it is more advantageous to scoop up receivers than running backs. That happens in the middle range of drafts from around the fifth through the eighth. This is important to keep in mind because you don't want to miss the falloff at wide receiver either.

Third, you can still get an early-round wide receiver, and there are advantages to doing so. If you're drafting in the second half of the first round, and Antonio Brown is just sitting there, staring you down, it would be wise to take him. The same is true for someone such as Jones in the second round. But when you do so, you must make sure you have a plan at running back so that you're not hung out to dry.

It will be hard to pass on the value at wide receiver this year, and we're going to get itchy fingers as we're drafting, seeing such big names go later. But you also must remember the flip side of the coin and think about the names you could be stuck with at running back. There's a huge difference between getting Dalvin Cook in the second round and Marlon Mack in the sixth, and we must keep that gap in our minds at all times.

In truth, we shouldn't blame Yara and Theon for getting in on that thirst for running backs. They're not overreacting to an up year at the position; rather, they're reacting appropriately to what the market is signaling, and we could all take a page from their books as we prepare for upcoming season-long drafts.

3 Questions to Ask Before Selecting Your Fantasy Football Keeper