Eric Ebron Has Bounce-Back Potential With the Indianapolis Colts

It's early April. We should have warm weather, chirping birds, and the whirring of insects as we grow closer to the NFL draft in the spring and offseason workouts in the summer. And, eventually, we'll get the changing of leaves in the fall.

But, instead, it's 31 degrees and snowing. Yuck.

With the continued piling-on by the bitter cold of winter, all we have to keep us warm right now is the NFL hot stove, and it has been cooking this year. Plenty of moves have rocked the NFL landscape, but one deal seems to be pretty well loathed by fantasy analysts and the general public -- and Iâ€™m not sure why.

Eric Ebron hasn't lit the league on fire, but he's still just 24 years old and is heading into his fifth NFL season. Could he thrive as one of the newest members of the Indianapolis Colts?

Much like a lot of NFL followers, I, too, forgot that the Detroit Lions drafted Ebron 10th overall in the 2014 NFL draft. Considering he's started just 37 out of a possible 64 games in his four years in the league, his story remains yet another cautionary tale about drafting tight ends â€“ who have one of the slowest developmental curves in the NFL â€“ too high.

Yes, Ebron was touted as a potentially game-changing receiving tight end â€“ the next Vernon Davis, if you will â€“ but many in the NFL draft community cautioned that he was an unrefined project, like so many at the position. The only problem with Ebron is that it's been four years, and he hasnâ€™t really broken out yet.

We can measure how effective (or not) Ebron has been in the league by using numberFireâ€™s signature metric, Net Expected Points (NEP). NEP is a metric that describes the contribution a play (or player) makes to their teamâ€™s chances of scoring. By adding down-and-distance value to the box score production, we can see just how much each play influences the outcome of a game. For more info on NEP, check out our glossary.

The chart below shows Ebronâ€™s Reception NEP per target compared to the league average for a tight end target over the last four years. 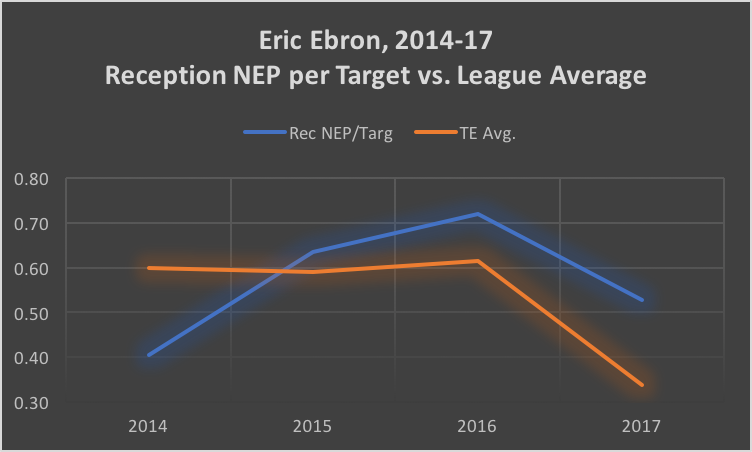 After a rocky rookie year, Ebron has remained head-and-shoulders above the rest of the pack in terms of value added per opportunity. However, when we compare him to his own team -- seeing whether or not he thrives in the scheme compared to others in the same offensive system -- Ebron is less impressive.

The table below shows his production in terms of percentage above or below the team average Reception NEP per target, catch rate, and Reception Success Rate (the percentage of catches which the player converts to positive NEP).

Ebron provides a solid amount of value per opportunity over the average Detroit tight end, but his catch rate and success rate have been lacking in recent years. Those phenomena may be linked, however. NFL Next-Gen Stats shows that among the 31 tight ends with at least 44 targets last year, Ebronâ€™s 7.7 air yards per target ranked 17th. Heâ€™s not a checkdown possession target; he is a seam-buster, albeit an inconsistent one for now.

Many people seem to be ringing the bell for Ebronâ€™s fantasy death knell because of his downward slump in recent years and going to the Indianapolis Colts, where there is already an entrenched 100-target tight end in Jack Doyle. But Doyle might not be the big hurdle so many believe him to be.

In the same way we measured Ebron's performance relative to his teammates, letâ€™s look at Doyleâ€™s past two seasons compared to those of other Colts.

Doyleâ€™s receiving upside isnâ€™t much better than Ebronâ€™s, and yet his floor is just about as low. And, if we consult Next-Gen Stats again, this mediocre production and lack of reliability came despite the lowest average air yards per target among qualifying tight ends last year. Running routes so much closer to the quarterback, Doyle should have much higher catch and consistency rates. Despite this, he disappoints.

Hereâ€™s where things get interesting, though. Over the last two years, Doyle has ranked 29th and 7th in Pro Football Focusâ€™ run-blocking grades among tight ends. Meanwhile, Ebron has turned in ranks of 65th (out of 65) and 38th (out of 72). Knowing this, there's certainly a chance that the Colts allow Doyle to remain an inline blocker more frequently in 2018 while Ebron plays more of a pass-catching tight-end role.

Itâ€™s not as if new head coach Frank Reich doesnâ€™t know how to properly use tight ends, either. Reich spent 2014 and 2015 with the then-San Diego Chargers and the last two seasons with the Philadelphia Eagles, using the talents of Antonio Gates and Zach Ertz to their maximum.

The table below shows the team target share (percentage of a team's pass attempts targeting a player or position group), year to year, for tight ends in Frank Reich offenses as well as the top and second tight endsâ€™ target shares and fantasy points per target (FPTS/Targ).

A 16.5% team target share for Ebron, if he was the top receiving tight end in Reichâ€™s offensive plans, would be just fine for his fantasy value because he has seen just 12.04% of the Lionsâ€™ targets over the course of his career. In addition, Reichâ€™s offenses average 604 passing attempts per year while the Lions have attempted 600 per season in Ebron's tenure. Not only does Ebron appear to be walking into a larger share of the action, but the total action of the offense is quite similar.

The big loser in this move for fantasy purposes is Jack Doyle, who should be slotted into the secondary role that Trey Burton and Ladarius Green inhabited for the Eagles and Chargers, respectively. With the second tight end in Reichâ€™s offenses earning an average 7.42% of the teamâ€™s targets, Doyleâ€™s value is about to drop out on fantasy owners, unless he can muster a bunch of touchdowns.

Ebron has the potential to reach 100 targets in 2017 with similar quality (if Luck is healthy) and with less competition for targets due to Donte Moncrief walking in free agency. This signing doesnâ€™t necessarily boost the young and athletic tight end's fantasy potential, but it shouldnâ€™t completely bury him, either.