How Will the Los Angeles Rams Use Brandin Cooks?

The fear of going all-in and failing keeps NFL teams from making splashy moves to take advantage of good rosters. Too often they worry about giving up a little of the future and the possible PR backlash from getting aggressive when they have a chance to win, and instead they settle for mediocrity.

Thatâ€™s not the case when it comes to the Los Angeles Rams. The Rams are showing, over the past two offseasons, that they are pushing their clock forward. By making a blockbuster deal to acquire wide receiver Brandin Cooks from the New England Patriots on Tuesday, the Rams are keeping their opposition off-balance and going aggro.

So, how will the Rams utilize their newest weapon?

How Did We Get Here?

We wrote extensively about the New England Cooks trade and how the Patriots continue to crush the draft annually last year, pointing out how the Pats exploited value by trading the 32nd selection of last yearâ€™s draft for Cooks. Using Pro Football Referenceâ€™s Approximate Value (AV) metric and the average AV per game each draft slot historically generates, we saw that the Pats got big value by trading an unknown commodity last year for an already-great Cooks, who has generated 0.655 AV per game in his career as of this offseason.

Here, the Rams pull the same type of deal by swapping pick 23 in the 2018 NFL Draft, which has a historical value of .382 AV per game, for Cooks â€“ a bonus of nearly .273 AV per game with much less risk than a random player.

However, draft picks and roster spots aren't the only assets we need to consider in this equation. We also have to consider the contract costs in regards to Cooks, who is playing 2018 on the final year of his rookie contract. Sure, it makes some sense to replace Sammy Watkins (who is now making $16 million a year) with the cheaper Cooks (making $8.46 million this year), but the Rams will need to sign Cooks to an extension before he walks in free agency and they have nothing to show for it.

If we assume Cooks nets a contract extension similar to Watkins, and if we compare the value he provides per dollar spent to that of the 23rd pick in the 2018 Draft, things become a lot closer than we think. The table below shows this in terms of salary cost per AV for each of Cooks and whoever will be picked at 23rd Overall this year (rookie scale per Over the Cap).

With the cost to earn one point of AV nearly triple when adding in Cooks' second contract, this just doesn't appear as good a deal as the Pats' trade for Cooks last year. The Rams have the theory of trading for a young, valuable player down, but the execution here just isn't quite right.

When the Rams traded for Watkins last offseason, they essentially used him as a downfield home-run hitter: an asset to blow the top off of the defense, but not a highly-targeted offensive contributor. NFL Next Gen Stats confirms this, as Watkins saw the 16th-most average air yards (distance the ball traveled downfield before the catch) per target among receivers last year, but had just 70 targets in 15 games (4.67 per game).

Cooks -- perhaps not coincidentally -- functioned in the same way for the Patriots in 2017: he ranked 7th in average air yards per target, but still earned 114 targets in 16 games (7.13 per game).

We can compare how effective Watkins and Cooks were in doing this by using numberFireâ€™s signature analytic, Net Expected Points (NEP). NEP is a metric that describes the contribution a play (or player) makes to their teamâ€™s chances of scoring. By adding down-and-distance value to the box score production, we can see just how much each play and each team as a whole influence the outcome of games. For more info on NEP, check out our glossary.

By comparing Cooks and Watkinsâ€™ production to that of the average wide receiver production on their teams last year, we can see how effective they were relative to their own offensive scheme. The table below shows the difference between their rates and team averages in Reception NEP per target, catch rate, and Reception Success Rate (percent of catches that added positive NEP).

Both players were above-average in value per opportunity (Reception NEP per target) and consistency (Reception Success Rate), and below-average in catch rate, which -- as deep threats -- is to be expected. It appears that Cooks could be a downgrade in both positive areas, but with a larger target load than Watkins in 2017, itâ€™s possible that big plays simply regressed to the mean a bit more for Cooks.

The big difference between Cooks and Watkins for the Rams comes in the versatility of Cooksâ€™ route tree.

Years ago, Football Outsiders did a study of the value added by players per kind of route run, and Cooks was replacement-level or better in 2016 at the out route, dig, post, and comeback. Pro Football Focus (PFF) added that Cooks was by far the best receiver in the league that year by Yards per Route Run on routes with multiple breaks â€“ option routes, slant-gos, hitch-and-gos, etc. Cooks was a top-five pass-catcher in the league, per PFF, at the in-route and comebacks in 2017 to boot. Watkins tops none of these charts.

For an offensive tinkerer like L.A. head coach Sean McVay, the options that Brandin Cooks presents him with help mitigate the loss of the first-round pick this year, but are a stark improvement from Watkins.

With this kind of versatility, it would be a shock to see the Rams run out Cooks with the exact same downfield role that Watkins had in 2017.

Having spent as much as they did, the Rams should try to feed Cooks the ball and get him in favorable matchups. The chart below shows Cooksâ€™ team target share (percent of team drop backs targeting the player) over the last three years of his career. 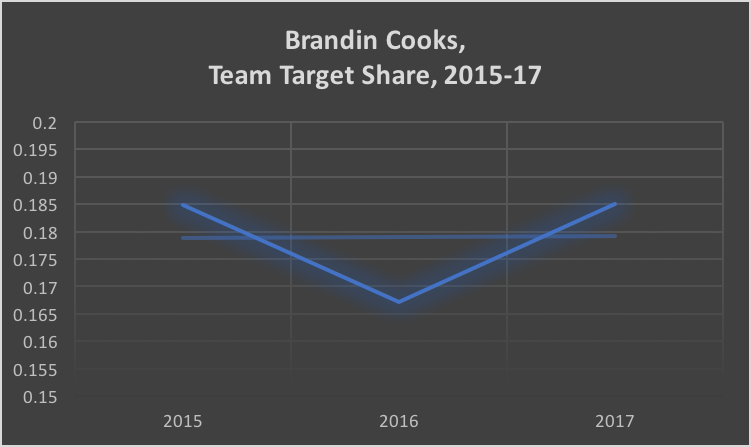 The faded line going nearly horizontal shows us the average trend of Cooksâ€™ target share, which has stayed nearly identical over his career. Cooks has seen 17 to 18 percent of his teams' targets (not an unsustainably high number for a number-one receiver, considering DeAndre Hopkins' 30.1 percent). Cooks' 2017 mark ranked in the bottom half of the league for teams' top receivers.

We know that the big driver for fantasy success is opportunity, which -- for receivers -- means targets. Unfortunately, if offenses don't have bundles of targets to give, they won't be able to sustain high target loads for their wideouts. The Rams represent a downgrade in passing volume for Cooks: with 547 passing plays in 2017, Los Angeles was in the bottom-10 of the league in both raw volume of passing and pass-to-run play calling ratio. If we assume that in 2018 they remain around the same volume of passing attempts -- about 520 attempts, not drop backs -- that would still be about only 88 percent of the Patriots' passing plays from 2017.

18 percent of 520 targets would mean around 93 targets for Cooks, or over 20 fewer than this past season.

Perhaps there's a case to be made that Cooks will earn a larger share of the target pie, due to a lack of quality pass-catchers in Los Angeles, but Cooper Kupp and Robert Woods both performed well last year relative to the team average and much higher relatively than Danny Amendola, Chris Hogan, and Phillip Dorsett. Even if we suspend this disbelief and say Cooks will grab 20.0 percent of the team's target share -- a career-high -- that would be just 104 targets, or 10 fewer than he saw in 2017.

Cooks finished last season with 172.5 half-PPR fantasy points, good for 13th among wide receivers. Even assuming no drop-off in quality from Tom "The G.O.A.T." Brady to Jared Goff, 15 fewer targets would bring him from a high-end WR2 to a high-end WR3.

Fantasy Football: Brandin Cooks Is Being Limited By a Lack of Targets

The Rams' Offensive Improvement Is Unlike Anything We've Ever Seen

The Los Angeles Rams' Offense Is Firing on All Cylinders