Based on the Numbers, Colin Kaepernick Deserves a Place in the NFL

Joe Redemann  —  @TheIDPGuy Oct 16th, 2017
Share on Facebook Share on Twitter
Despite the sad state of NFL quarterbacking thus far in 2017, Kaepernick remains a free agent, but our metrics say he's capable of helping a team.

We're one game away from Week 7 of the 2017 NFL season, and things are extraordinarily dark right now.

Sure, I happen to be writing this article on my porch on a mid-October evening in the Upper Midwest, but Iâ€™m not referring to the shortening of days as winter fast approaches. Iâ€™m talking about the fact that my hometownâ€™s Minnesota Vikings are just one team that started a subpar quarterback this past Sunday.

Case Keenum taking regular-season snaps is merely a symptom, not the disease, however. The National Football League is suffering a quarterback shortage at this point in its history, one that is exacerbated by its repeated refusal to employ one of the better free agent quarterbacks available: Colin Kaepernick.

What is going on with quarterbacking in the NFL in 2017?

On the Outside Looking In

There are plenty of extenuating circumstances involving the Kaepernick saga, but no matter what you feel about the causes he supports or the actions heâ€™s inspired, itâ€™s basically bonkers that he doesnâ€™t have a job in the highest level of professional football right now.

I feel pretty secure writing that sentence in an NFL season in which weâ€™ve seen starts from Scott Tolzien, Tom Savage, Matt Cassel, Mike Glennon, E.J. Manuel, Brian Hoyer, Josh McCown, and Keenum â€“ and weâ€™re barely over a third of the way through the year.

If you remember, the last time that Kaepernick touched a football in a regular season NFL game was just January 1st, 2017, a mere nine months ago. At that time, he had tossed 331 passes in the 2016-17 season at a 59.2 percent completion rate, 6.77 yards per attempt rate, 4.83 percent touchdown rate, and 1.21 interception rate. This was hardly superstar level production, but in an alternate timeline â€“ where Brandon Weeden does not have a roster spot â€“ these are reasonable backup numbers.

We can illustrate that through our in-house Net Expected Points (NEP) metric. NEP is a metric that describes the contribution a play (or player) makes to their teamâ€™s chances of scoring, and the passing variant specifically measures contributions every time a quarterback drops back. By adding down-and-distance value to the box score production, we can see just how much each play and each team as a whole influence the outcome of games. For more info on NEP, check out our glossary.

And thatâ€™s without even considering Kaepernickâ€™s real strength: his rushing ability. His passing prowess has panned for a while, but the former 49ers' quarterback excels at making space in the ground game, and he earned the eighth-most Rushing NEP per attempt last year among the 39 qualified quarterbacks. Including his rushing value, his Total NEP per opportunity (drop backs plus rushes) came in 22nd among the quarterbacks of 2016.

And for those of you that shrug at rushing value versus passing ability, itâ€™s a big reason why Cam Newton is still so successful, why Deshaun Watson is taking the league by storm this year, and why Russell Wilson, Marcus Mariota, and Aaron Rodgers are a few of the best quarterbacks in the league.

Kaepernick clearly deserved a job based on his recent production, but does he still? Or has the league passed him by?

Days Get Shorter, Nights Get Cold

We are in the Golden Age of the Forward Pass right now, but the heroes of this era are slowly fading.

The chart below shows the combined league schedule-adjusted Passing NEP over the last 10 years, with 2017â€™s prorated total tacked on at the end. Check out the huge drop in value weâ€™re on-pace for this year. 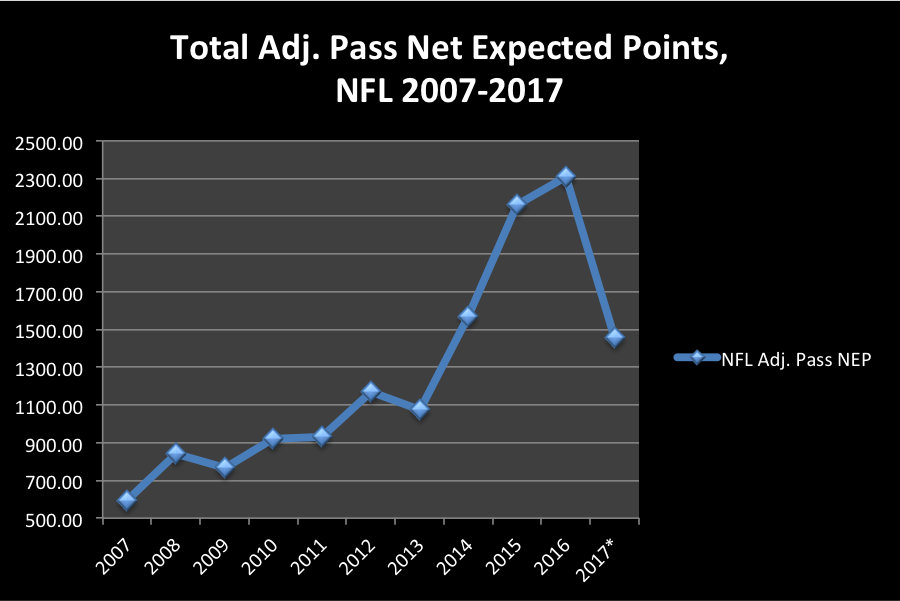 Again, this is just the passing value bleeding from the NFL: it's on pace to drop by just over 37 percent from last year. A big part of the problem is the fact that bad quarterbacks are getting a ton of playing time as injury replacements and backups, and that the leagueâ€™s former stars are aging and falling apart.

Of the 37 quarterbacks who are on pace to surpass 100 drop backs this year, the table below shows the 17 of them who through Week 5 matched or fell below Kaepernickâ€™s 0.04 Passing NEP per drop back rate from 2016.

Even #good, unquestioned starters like Matthew Stafford, Ben Roethlisberger, Carson Palmer, and Andy Dalton fall below Kaepâ€™s clip as of now â€“ not a good look.

I included a third column, as well, signifying Pass NEP per drop back minus the positional average for 2017; this helps us adjust a quarterbackâ€™s quality to the era better. Kaepâ€™s 0.04 Passing NEP per drop back in 2016 was 0.08 below the league average, which means that -- adjusted for the year -- Roethlisberger, Stafford, Blake Bortles, and McCown graduate from the cellar.

That still means Kaepernick could have been around the 25th-best passer in the league this year, well above Jay Cutler (who the Miami Dolphins dragged out of retirement this offseason), Glennon (who the Chicago Bears gave nearly $2 million per interception thrown in the first four games of the season), and Hoyer (to whom the 49ers literally gave Kaep's job).

Now, we sure can hope that Cassel and Manuel donâ€™t actually hit that 100 drop back mark this year, but this is the state of the NFL as it stands. Even if Andrew Luck and Sam Bradford come back and do well, and Kevin Hogan remains a quality starter all year, Kaepernick would still likely be one of the top-30 quarterbacks in the NFL this year if some team employed him.

Kaep is still well worth the investment as a backup, and some teams would be well served to start him, too. If the quality of quarterback play in the league is dropping off this badly, the NFL should be looking at any and all opportunities to improve it.

Colin Kaepernick Still Has Value as an NFL Free Agent

Was the Quarterback Play in Week 1 Really That Bad?