Should We Be Buying Tyler Lockett in Fantasy Football?

Jim Sannes  —  @JimSannes Jul 12th, 2017
Share on Facebook Share on Twitter
Last year, Lockett was a seventh-round pick in fantasy football. Now, you can get him for free. Is that enough to justify an investment?

Let's take a little trip back to September of 2016, shall we?

The buzz was humming around Seattle Seahawks wide receiver Tyler Lockett as he prepared for his second season in the league. Lockett dazzled as a rookie, turning just 69 targets into 664 yards and 6 touchdowns while surging down the stretch. As a result, he was a seventh-round pick in point-per-reception (PPR) fantasy drafts, according to Fantasy Football Calculator, just a few rounds after his touchdown-hog teammate, Doug Baldwin. Peeps was feeling the good vibes.

What a difference a year makes.

Ten months and one broken leg later, Lockett is the 65th receiver off the board with a lower average draft position (ADP) than fantasy studs like Mason Crosby and Adam Vinatieri. Lockett's stock is fully submerged in the gutter.

Lockett is reportedly recovering well from his leg surgery, and head coach Pete Carroll said in June that the team still hopes to have Lockett ready for training camp. So if it's not the injury concerns dragging him down, he should logically be a player on whom we'd want to buy low, correct?

Unfortunately, it's not quite that easy. There are a plethora of different forces tugging at Lockett's stock, and the leg injury may be one of the lesser factors. Lockett had a disappointing season prior to that injury, so it's possible the market has just readjusted to his true value.

Is Lockett a player we should buy? Or is he free for a reason? Let's take a look at both sides of the coin to see how we should be handling him as our 2017 drafts approach.

The Reasons to Buy

We'll start here with the good on Lockett because there's still plenty to love, even after a disappointing 2016. The first reason is that he's not too shabby at this football thing.

Because the Seahawks' receiver core was fairly stable in both of Lockett's first two seasons, we can compare him to his teammates over those two seasons to see how Lockett stacks up. We'll do this using numberFire's Net Expected Points (NEP), which tracks the number of expected points a player adds to his team on each play. If Lockett makes a tip-toe catch on the sidelines 30 yards downfield, it'll certainly add to the team's expected point total for the drive. If Russell Wilson chucks it Lockett's way, and the pass gets picked off, that's probably not going to reflect well.

Thankfully, that hasn't happened often since Lockett joined the team. The table below shows the Target NEP each receiver has added since the start of 2015 along with their total targets and per-target contributions. From an efficiency perspective, there's plenty to like with Lockett.

Baldwin was among the league leaders in Target NEP per target both seasons, so there's no shame in falling short of him. And Lockett's lead over Jermaine Kearse is gargantuan, meaning Lockett should be seeing the target load of the team's second receiver. When your quarterback is as efficient as Wilson, there's plenty of value in that.

However, Lockett's target load didn't reflect that last year. Even excluding the game in which he broke his leg, Lockett was held to fewer than five targets in half of his 14 games, and he topped 50 receiving yards just four times. That's not doing a whole lot for you as a fantasy asset.

There's a reason we're discussing this in the "Reasons to Buy" section, though. Lockett suffered a knee injury in the team's second game, and it forced his snap count to crater. After playing 75.6% of the snaps in Week 1, Lockett played just 32.9% and 23.3%, respectively, in the two games following the injury. That ding was still an issue in mid October, and it's entirely possible it held Lockett back from reaching his full potential.

This is reflected in Lockett's game logs, as well. The chart below shows his weekly target market shares in the Seattle offense, excluding the Week 17 game he missed due to his broken leg. It certainly seems as if things were trending up leading into that. 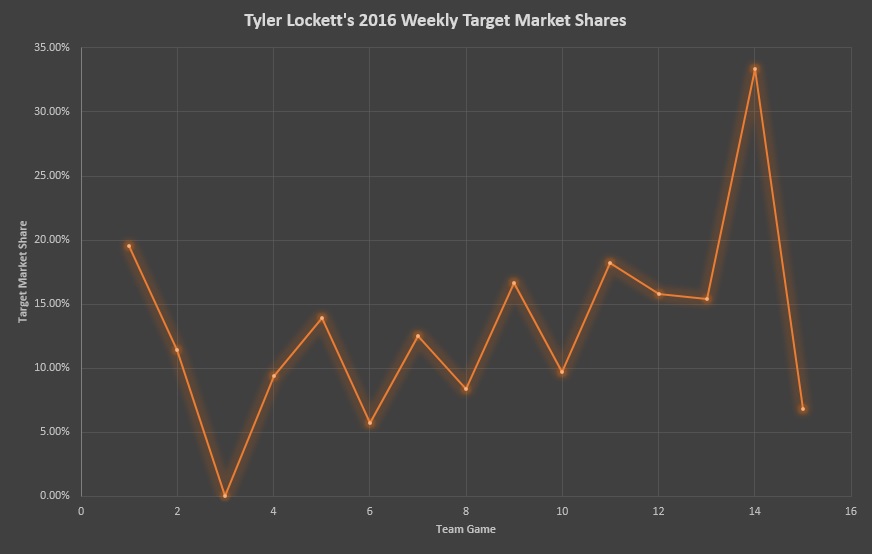 Lockett topped a 15% target market share in six games, and four of them were his final four games before his season-ending injury. In that four-game stretch, his target market share was 19.40%, which isn't great, but it'll work if the player is as efficient as Lockett. All of this seems to support the narrative that the Week 2 injury lingered and held Lockett down.

At the same time, this same up-tick provides a great transition into our section about why there should be skepticism around Lockett. Yes, Lockett improved as the season went along, but he needed another player to go down before he took that leap.

The Reasons for Skepticism

If you go back to that chart, you'll see that Lockett's jump occurred in the team's 11th game. That happened to be one game after C.J. Prosise went down with a shoulder injury, and that's probably not a coincidence.

Prosise returned from his first ailment in the team's sixth game and was a major factor in the offense over the next five weeks. His presence seemed to have a negative effect on Lockett's role.

Take a look at Lockett's target market shares in games with Prosise compared to those without. Because Lockett played just 37 total snaps the two weeks following his knee injury, those two games were excluded from the calculation. He also played just 26 snaps before breaking his leg in Week 16, so that game was omitted, as well. There was a pretty major gap in Lockett's role depending on Prosise's health.

Even if you include the three games in which Lockett's snaps were capped, he still had a higher target market share (13.18%) without Prosise than he did with him. Logically, this makes sense even though the two play different positions, but it doesn't brighten Lockett's outlook for 2017.

Prosise says he's now fully healthy in coming back from that shoulder injury, and he showed during his rookie campaign that he deserves a role. If you add his receiving presence to a team with Baldwin and Jimmy Graham, can Lockett truly carve out a fantasy-relevant role?

In essence, your thoughts on Lockett will vary drastically based on one very simple question. Do you believe Lockett's late-season up-tick was due to improved health, or was Prosise's injury the sole reasoning? It's likely a mix of both, but the degree to which each factor accounted for the change will have a big effect on what we should expect from Lockett in his third season.

Why Lockett's Worth His Cost

Because of the questions surrounding Lockett, it should be clear that pushing him back to last year's ADP would be outrageous. But those questions don't justify his standing as a 14th-round pick, and we should be willing to buy him at that price.

Once you get that late in a draft, every player is going to have risk. He's going behind guys like Breshad Perriman, J.J. Nelson, and Allen Hurns, who have just as many red flags as -- if not more than -- Lockett. We've seen what Lockett can do when he gets opportunities, and his current cost doesn't reflect that.

Here's Lockett's situation as it stands now. He's likely the second receiver on an efficient offense that was in the middle of the pack in pass-to-run ratio last year. If something were to happen to Baldwin, Lockett's role would suddenly be immense. There are more barriers to excellence for Perriman, Nelson, and Hurns, so Lockett's inclusion in this tier is a bit mind-numbing.

It's entirely possible that having Prosise, Baldwin, and Graham all healthy blocks Lockett from being a contributor in 2017. But between his past production and the potential long-lasting effects of last year's injury, there are enough reasons to believe that Lockett's role will increase this year. There is almost no opportunity cost at this point, so even though there are risks, what do you have to lose? The answer there is not enough to scare us off from giving him a sniff once the back end of a draft rolls around.

Which Wide Receivers Will Score More Touchdowns in 2017?