Which Wide Receivers Will Score More Touchdowns in 2017?

I'm going to have to ask you to trust the process.

I'm not alluding to the battle cry of the Philadelphia 76ers (but I'm not not alluding to it). I'm really just asking you to trust the process that earlier helped uncover which wide receivers should have scored fewer touchdowns in 2016 than they actually did, based on our metrics at numberFire.

Essentially, our Net Expected Points (NEP) metric shows how impactful a player is in terms of expected points added to his team. A quick example is a 10-yard catch on 3rd-and-8 compared to the same catch on 3rd-and-12. One extends a drive, and one likely leads to a punt or a field goal try compared to a fresh set of downs.

The more positive plays a player makes, the more expected points he adds -- and the more touchdowns he should score. That's what NEP tells us, anyway. To test this, I've charted each wide receivers touchdown total with his Reception NEP from 2012 to 2016, and Excel popped out this puppy for me. 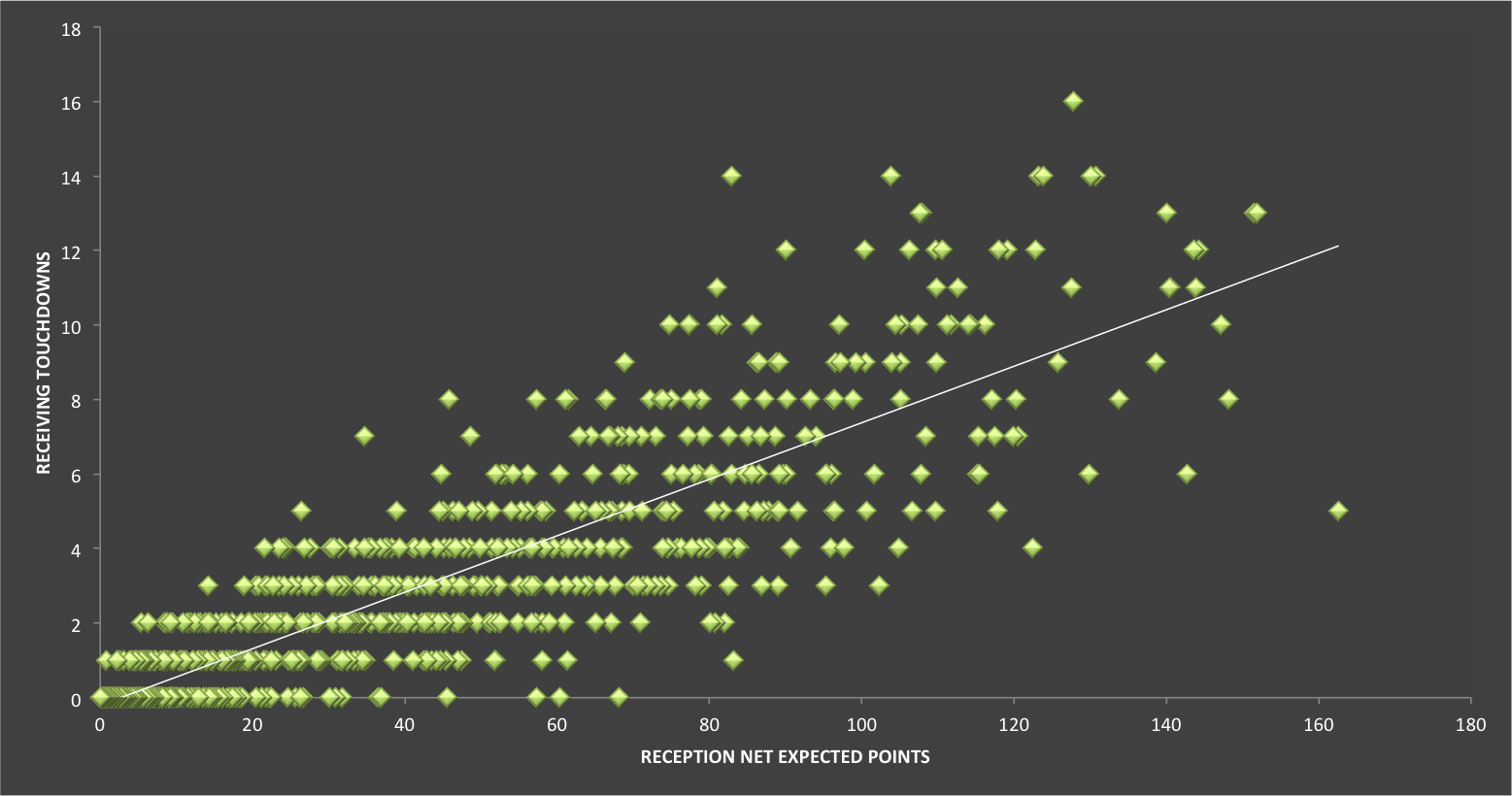 Of course, some players can secure NEP upon NEP and not be utilized near the end zone and some players can just snare touchdown grabs after his team gets him into scoring position. Still, 2015's candidates to score fewer touchdowns in 2016 did just that, so we've got that much cooking for us.

To give some context, here are the top 10 players the model pegged as players who should have scored more touchdowns in 2015 than they did and their touchdown numbers in 2016. I removed players with fewer than 30 catches in 2016.

None of these guys went backward significantly (though T.Y. Hilton did drop from 0.072 touchdowns per catch to 0.066). Julio Jones dropped in touchdowns but saw 53 fewer catches in 2016 than he did in 2015.

Basically, the model identified some candidates who did improve their touchdown rates, and some guys on the list played at the same level. Nobody got worse, and that's good news for these 2017 candidates.

This is the list of 19 receivers who should have scored at least two more touchdowns than they actually did, based on this process.

Of course, Pierre Garcon swapped teams (from Washington to San Francisco), and that can complicate things. Still, since 2009, only two other receivers posted a Reception NEP of at least 95.00 and scored fewer than 4 touchdowns: Antonio Brown in 2011 (2 touchdowns, 101.68 Reception NEP) and Mike Evans in 2015 (3 touchdowns, 102.21). Evans was the poster boy for a correction in touchdowns in 2016.

Hilton was on this list last year and produced around the same rate of touchdowns per catch. His teammate, Donte Moncrief, produced touchdowns at an insane level in 2016 and was one of the players the model said scored too many touchdowns relative to his Reception NEP. Of course, Hilton's game is to get the Indianapolis Colts down the field into scoring position, and Moncrief has the body to score touchdowns. Keep that in mind.

That's similarly the case with Julian Edelman, who is a possession-first receiver. The return of Rob Gronkowski should keep eating into Edelman's touchdowns, and if you throw in the addition of Brandin Cooks, it's unlikely Edelman's touchdown number accurately reflects his NEP impact this season.

You'll have to excuse any typos regarding this section (it's not easy to hit the right keys when you're levitating), but Chris Conley did make an impact on the Kansas City Chiefs' offense in 2016. He just didn't get into the end zone. He was one of just six receivers since 2009 to produce at least 45.00 Reception NEP and be held without a touchdown.

Combine that with Tyreek Hill's elevated touchdown number in 2016, and we're (possibly) in business. Of course, Hill is expected to step into a larger role, and Conley is far from a lock to see significant targets. But the numbers say some of Hill's scores could go to Conley in 2017.

Terrelle Pryor is heading to Washington and could eat up some of the touchdowns that Garcon missed out on in 2016, and Alshon Jeffery is in a new uniform for 2017 (though teammate Jordan Matthews also makes an appearance on this list).

Stefon Diggs' production waned after a lingering groin injury in Week 4 last year, but NEP says he should have nearly doubled his actual touchdown output.

DeAndre Hopkins and Julio Jones are both being drafted in the first three rounds of fantasy drafts (according to FantasyFootballCalculator) and could see a bump in the touchdown column. Each saw just nine red zone targets in 2016 (the same number as Todd Gurley and Terrance West because, well, I don't know why).

Brandon Marshall transferred New York teams and joins the New York Giants, who ranked 22nd in Adjusted Passing NEP per play in 2016. That's not a great number, but Marshall's Jets were 30th in 2016. It's an improvement at least.

Of course, none of this is to say that these guys will overcorrect (or even correct at all) in 2017, but the numbers make them interesting candidates to build on underwhelming touchdown totals from 2016.

Can Ezekiel Elliott Be Fantasy Football's Top Running Back in 2017?