Matt Blair  —  @grizzlyblair Jun 27th, 2017
Share on Facebook Share on Twitter
Lynch landed in a nice situation, but as a 31-year-old running back, he comes with plenty of red flags. Those concerns, however, aren't reflected in his current average draft position.

What do hip hop artist M.C. Hammer and running back Marshawn Lynch have in common? They were both born in Oakland, California, and they were both 2 Legit 2 Quit.

After hanging up his cleats on a telephone wire at the end of the 2015 season, Lynch purchased new kicks and returned to the NFL -- this time with his hometown Oakland Raiders.

The situation is an ideal one for Lynch. He gets to play in an up-and-coming offense that can move the ball through the air as well as on the ground behind a highly-skilled offensive line. Per Football Outsiders, Oakland ranked 11th in run-blocking and 1st in pass-blocking in 2016.

His competition in the backfield -- Jalen Richard, DeAndre Washington, and Taiwan Jones -- has combined for 214 career carries. For symmetrical purposes, Lynch has accrued 2,144 carries over his career. The outlook for him to start and carry the load for Oakland is positive, but there should also be some concern before drafting him this summer.

The Price is Wrong

The most logical reason to avoid drafting Lynch is his current average draft position (ADP). In standard 12-team leagues, he is going early or in the middle of the second round, per Fantasy Football Calculator. Regardless of how ideal his situation may seem, that price is absurdly high. When it comes to drafting, I like to have an idea of what price I should be paying for each player. I'm like Dwight Schrute at a silent auction.

At this price, you are likely paying for his highest expected outcome. He is going 10th among running backs, around the likes of Jordan Howard, Leonard Fournette and Todd Gurley. That may sound reasonable, but he's also being drafted ahead of stud receivers like Michael Thomas, T.Y. Hilton, and Dez Bryant. That doesn't sound so reasonable.

While that part of the draft will move and shake quite a bit between now and August, odds are that Lynch will be drafted in the second round of your drafts.

To put things into perspective, coming into the 2015 season, after racking up 265 fantasy points in 2014, Lynch's ADP was the middle of the first round. Now, after one tumultuous year of injuries and another year out of the league, his ADP has dropped just one round.

Those drafting Lynch this early may be having a bit of revisionist history. His final season with the Seattle Seahawks was marred with injuries, and his play suffered because of it. In 2015 alone, he suffered a calf strain, a hamstring strain, and a sports hernia. These injuries led to Lynch only playing in seven games.

The 2015 campaign was his least efficient season with the Seahawks (2011 was his first full season in Seattle), per our Net Expected Points metric, which you can read more about in our glossary. After four seasons of superb Rushing NEP per play marks, his numbers plummeted in 2015. 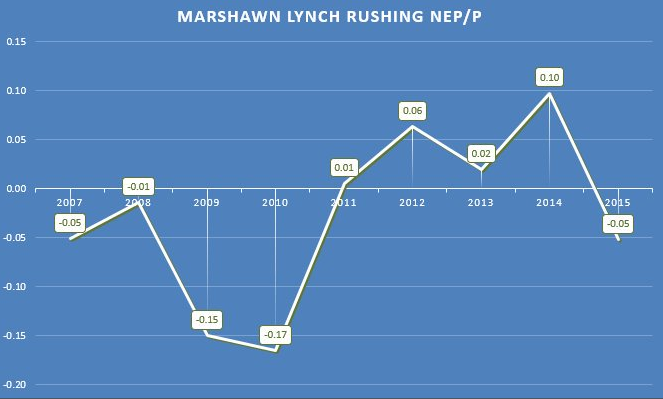 The optimist Lynch fan would say that the injuries were the sole reason for his poor play, and that may be true, but Lynch is not getting any younger.

When Lynch retired, it surprised some, but many understood that his running back shelf-life was starting to run thin. The now-31-year-old running back with over 2,100 career carries probably doesn't have that much more left in today's NFL. But that reasoning seems to have gone by the wayside with folks drafting him in the second round.

In 2015, Joseph Juan of numberFire wrote a piece about running backs seeing a sharp decline in production after surpassing 1,800 career carries. As I mentioned earlier, Lynch has 2,144 career carries and is a prime candidate to see his production falter. In fact, in 2015, Juan named Lynch as a candidate for decline right before his health deteriorated in his final season.

No Country for Old Running Backs

Lynch is one of the best backs in recent NFL history, so a 1,000-yard season and a chance at double-digit touchdowns is in the realm of possibility, but how often do running backs at his age rush for that many yards? Per Pro Football Reference, a running back of 31 years or older has only rushed for 1,000 yards five times in the past 10 seasons.

Two of those seasons were from Frank Gore, so this feat is rather rare. Could Lynch rack up between 800 and 900 yards and still hit the double-digit touchdowns mark? Sure, but how often do 31-year-old running backs find the end zone 10-plus times?

This feat has happened just three times over the past 10 seasons. While the odds aren't impossible, they are #notgood.

Lynch is a potential Hall of Fame running back, and his talent has never been in question. But if you want to draft Lynch, going by his current ADP, you have to pay more than he'll likely be worth. A lot of things have to go correctly for Lynch to meet his draft-day cost, and history is not on his side.