Randall Cobb Is Being Overlooked in Fantasy Football

The fantasy football landscape continually gives us new challenges to face every season, but one of the questions we seek to answer each year is who the market is overlooking. If we can successfully find and exploit market inefficiencies, then success in this game becomes more likely.

One such value this offseason is Green Bay Packers wide receiver Randall Cobb.

Back in March, my colleague Joe Redemann wrote an excellent piece describing how Cobb isn't good anymore. In it, Joe points out that Cobb's Reception Net Expected Points (NEP) and Success Rate have fallen off from where they once were.

On every play, there's an expected point value an NFL team has for the drive based on yard line, down, and distance. What happens on that play can change the expected point value on said drive. What NEP does is aggregate the value gained or lost on every play into a single, net number. Meanwhile, Success Rate is how frequently a player runs or receives for positive NEP.

You can read more about NEP and Success Rate in our glossary.

Cobb has been below average in Reception NEP per target each of the past two seasons, but this doesn't exactly tell the whole story.

2015 Was a Disaster for Everyone

The 2015 season was where Cobb's play dropped off severely from his previous career totals. However, with Jordy Nelson sidelined due to a torn ACL, this campaign was a mess for the entire offense.

Take a look at the difference in NEP per attempt (pass attempt, reception, or rush depending on position) for Aaron Rodgers, Cobb, Davante Adams, and Eddie Lacy in 2015 vs. their careers.

Cobb and Adams both performed below their career averages, which shouldn't come as a surprise since Rodgers was 75 percent worse than he has been throughout his career. Even the run game suffered, with Lacy performing over three times worse than his career numbers.

As a receiver who mostly plays in the slot, Cobb clearly struggles without a dominant threat like Nelson on the field. Here are Cobb's splits from 2012 through 2014 with and without Nelson. 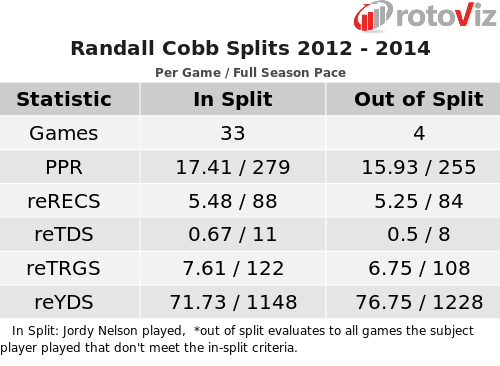 You may be saying to yourself, "But Anthony, doesn't this mean that Cobb isn't a very good football player?"


That isn't really the question we should be focusing on. What matters is if Cobb can be a productive fantasy player, which we know to be true under certain conditions. The first is having an elite quarterback, and the second being he is not the primary target of opposing defenses. Those conditions were not met in 2015.

But what about 2016? Rodgers and the Packers offense were back in full force -- they finished as a top-five unit in scoring -- yet Cobb still ended up as the 48th-best wide receiver in points-per-reception (PPR0 points per game. Surely, he's been surpassed completely by Adams at this point right?

Not so fast, my friend.

This year got off to a great start for Cobb, who received 51 targets over his first six games, which averaged out to 15.6 fantasy points.

But then he injured his hamstring leading up to Week 8, missing that contest. He was limited the rest of the year, averaging less than 70 percent of snaps before an ankle injury further complicated things. Take a look at Cobb's performance before and after his injury issues flared up.

Cobb was outstanding pre-injury, and fairly terrible after it. His injury was reflected not just in his snaps, but also his usage. He was tied for the team lead in targets, with a 21.5 percent market share, prior to getting injured. His pace of 15.6 points per game would have been good for being the ninth-best wide receiver in 2016.

It is also important to note that Cobb's presence had zero impact on the role or productivity of Adams. He saw about 18 percent of Green Bay targets both pre- and post-Cobb injury, and averaged 0.1 PPR points per game less after Week 7 than he did before.

This isn't a situation where the Packers were so impressed with Adams that they ramped up his usage. That Cobb role is still there for the taking.

Time to Buy In

Cobb is currently the 39th wide receiver off the board in My Fantasy League, and 37th in 12-team PPR leagues on Fantasy Football Calculator. That represents a tremendous discount on what he's been for most of his career.

Entering his age-27 season, it is unlikely that Cobb is experiencing any real decline in his skills, and he's an awesome value heading into the 2017 season.