I like to win. I think a lot of people do, too.

It's not that I'm super competitive or anything. It's just more that, if I'm going to participate, I'd prefer winning to, you know, not winning. Same goes with fantasy football.

And, sure, to some people, fantasy football strategy is just a fancy way of saying "pick the right players," but why would you not want to use past information to help determine who the "right players" are or could be?

Ultimately, the search for wanting to lose less often is what made me dig into how waiver-wire running backs and receivers performed in 2015. If there were consistent, viable options off the waiver wire, we could all take more chances in the draft and fall back on the waiver pool to fix our lineups.

If waiver-wire running backs are tough to trust, we probably shouldn't try to pluck league-winning backs off the free agent list all season, right? Well, that's how we ended up here, trying to figure out how wide receivers on the waiver wire fared in 2016.

Our goal is what I said it was: to figure out what happened when receivers were added from the waiver wire in 2016.

Something -- a big game, more snaps or targets, an injury -- causes a player to be noticed by the fantasy community.

But we rarely take a look back to see whether or not they worked out. We all have rostered players who panned out and players who didn't, but we should care more about the bigger picture to see how likely it is that our freshly-added receivers bust or produce.

I can go on and on and give examples, but we've been over this already when we looked at running backs from 2016 (and receivers in 2015).

Using waiver-wire data from FleaFlicker.com, I was able to find which receivers were added at a high rate in a given week in the 2016 season. After that, I dug up how those players fared in the weeks before and after the influx of additions.

That leaves us with a question of who is worthy of being studied, and for our purposes, we're looking at the top 30 single-week additions (based on volume of additions). The reason for that is to omit highly speculative or low-volume additions, players who may not have had a clear path to a bigger role or who had been drafted and kept on the end of the bench.

Week 14 is our cutoff, too, so that we have at least three weeks to see how these receivers did after being picked up.

The primary intent is to figure out how the 30 most "obvious" additions -- about two per week -- of the past season contributed in a fantasy sense.

Below is a snapshot of the top 30 single-week adds of the 2016 season at receiver, per FleaFlicker, sorted by most additions.

The image is color-coded: green indicates a finish of WR12 or better for the week, yellow shows WR13 to WR24, white is for WR25 to WR36, red highlights WR37 or worse, and gray indicates no result.

"Week -1" refers to one week before the addition (so, the game leading to or immediately prior to the influx in additions), and "Week 1" refers to the first week after the addition.

I've also added that player's full season (total points and per game) ranks among receivers in PPR formats as well as their ranks after the week they were added.

It's a lot to take in, but it's important. 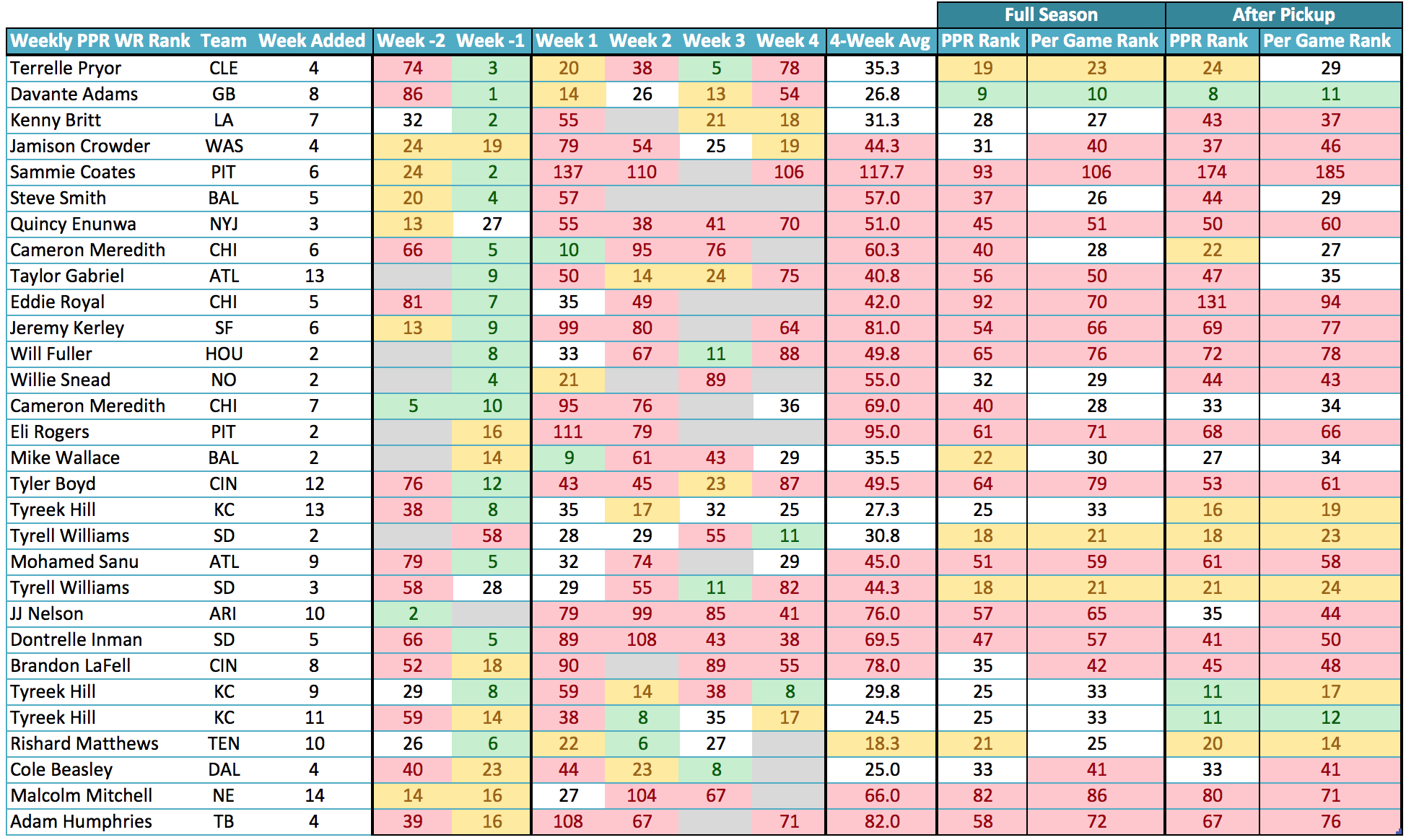 I know the red is a bit overwhelming, but you have nobody to blame but yourselves. Of course, what I mean by that is we as a fantasy football collective don't have a high success rate in adding productive receivers from the waiver wire.

Just look at the "Week -1" column. It's almost entirely green. The receivers were so good, so productive in their games prior to being added. And then it all went to hell (for the most part).

Terrelle Pryor and Davante Adams remained stud pickups for the long haul, but we missed the boat on a lot of these guys, players who had a top-12 week just one game ago.

As you progress through the table to the right, you'll see a four-week average column. Only one player -- Rishard Matthews after being added in Week 10 -- averaged a WR24 score or better after being added.

Of course, receiver production isn't super consistent. That is to say that even good receivers often have games outside the top 30, 40, or even 50 in a week. So that's why I went a step further and looked at their PPR ranks on the full season and also after the pickup occurred.

The larger concern is that just 7 of the top 30 additions (again, the biggest, single-week, "most obvious" adds of the fantasy season) went on to post WR24 or better marks in terms of points per game.

That's even worse if we look just at the top 15 adds (from Pryor to Eli Rogers on the table). Only Davante Adams was a WR24 or better after being added.

If we strip away the names and dig back deeper into history, we see pretty much the same type of return on these wideouts. These are the PPR ranks of the top 30 added receivers since 2010, excluding games where the players didn't play (either bye weeks or injuries).

About 85% of the adds came after top-24 weeks, but these guys returned WR37 or worse scores more than half the time the following week. And it didn't really correct after a game or two, so we can't really just give them the benefit of the doubt from a volatility standpoint.

Limiting the sample to the top 10 adds in each of these years doesn't really change much, either.

We react to top-12 PPR performances, but these receivers -- even the 10 biggest adds of the year -- produced WR37 or worse numbers more than half the time after the waivers process. Is that really worth a top waiver claim?

If viewed even as average or median PPR rankings, it's pretty much the same thing.

We're just too slow to react, and we overreact to big wideout games. Year after year. And we tend to get stuck with a flex option at best.

Yes, there are still the Davante Adams situations (how weird is that to think about?) and the Terrelle Pryors and even the usable Rishard Matthews types, but historically, adding high-impact receivers from the waiver wire just doesn't happen very often.

Waiver wires are tough to navigate whether we're talking running backs or wide receivers. But they're a big part of the game we play.

Still, it's a tall order to expect players we didn't like enough to draft or stash to produce significant fantasy points just because of an improved situation. Sometimes we just add a guy because he had a big game before, and that almost never works out.

Maybe doing what we can to flip hot waiver-wire assets for more proven commodities is the best way to implement in-season additions to our rosters. I'm not saying to offer a scrub you just picked up from the waiver wire for a slow-starting Odell Beckham, but selling waiver-wire receivers at their peak might be the best way to operate.

There will always be a fear of missing out on breakout campaigns, but the past seven years suggest those don't really come from the waiver wire.

What Is a Waiver-Wire Running Back Actually Worth in Fantasy Football?

What Is a Waiver-Wire Wide Receiver Actually Worth in Fantasy Football?