6 Quarterbacks Who Are Due for Fantasy Football Regression in 2017

Sometimes, a player's performance on the field does not match up with his fantasy production.

I created some models last year to help evaluate fantasy production as it relates to numberFire's Net Expected Points (NEP). On every play, there's an expected point value an NFL team has for the drive based on yard line, down, and distance. What happens on that play can change the expected point value on said drive. What NEP does is aggregate the value gained or lost on every play into a single, net number.

You can read more about NEP in our glossary.

These models helped identify players whose on-field performance varied drastically from their fantasy production, and predicted that they would regress closer to their mean in 2016. So, we're back here to do it again with the same exercise for the upcoming season.

There will be some differences between the 2017 model and the 2016 version.

First off, the sample is much bigger -- instead of looking at the last five years of quarterback performances, this version goes back to 2000. Here is the graph of Passing NEP versus fantasy points per game accrued through passing for quarterbacks with at least 200 attempts since 2000. 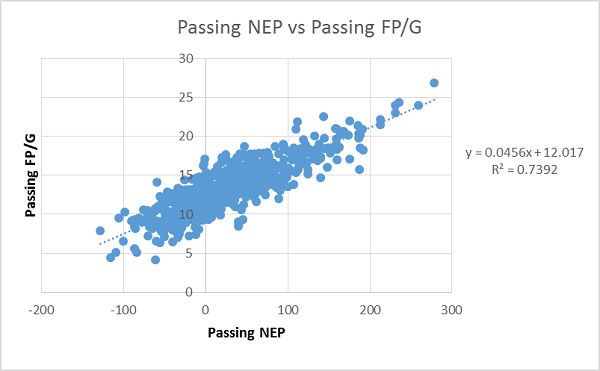 The coefficient of determination is slightly worse (it was 0.7565 last year), but on a much larger sample (589 quarterbacks instead of 181). This is still a terrific mark (the closer to 1.0 the better), and the expanded sample makes it easier to find the outliers who should regress this season.


Performance is being checked in this way because we expect quarterbacks who outproduced their on-field play to decrease the following season. Also included is the percentage of quarterbacks in each bucket who regressed, and the average change in scoring the following year for the entire group.

There appears to be a large jump in expected change in performance once quarterbacks hit the 2.5 FPPGoE threshold. At that point, 68 percent of qualifying quarterbacks regress, with an average change in scoring of -1.402 points (remember, this is only points through passing). This will be the threshold we use to identify our negative regression candidates.

We can also check for significant thresholds for positive regression candidates.


Using the same methodology, the best threshold to use appears to be -1.5 FPPGoE. It provides us with a fairly large sample, along with the second-best regression percentage and change in score. The threshold first in both categories (-3 FPPGoE) has a sample size of just 10 players, so it is difficult to tell how accurate it is.

It should be noted that the odds of any random quarterback in the sample doing better or worse the following year was 50 percent in either direction. The improved predictive power using the model is significant.

Using this a a guide, the following six quarterbacks fell into the FPPGoE threshold established in either direction.

In terms of Passing NEP per drop back, Andrew Luck's 2016 production was league-average. His raw Passing NEP of 84.4 was very close to that of Marcus Mariota, who finished as the 10th-best quarterback in points per game.

Luck has been a top-six fantasy passer in each of the last three years, but that run could come to an end in 2017.

People would probably be surprised to hear that Blake Bortles finished as the 9th-best quarterback in 2016, and the 16th best in points per game. His play was awful, though, as the Jacksonville Jaguars won just three games.

With major upgrades on defense and the addition of Leonard Fournette in the draft, Bortles could continue to tumble down the quarterback standings.

Andy Dalton is going to be a premier quarterback target in 2017. He was terribly unlucky last year, posting a touchdown rate of just 3.2 percent after throwing a touchdown on 5.2 percent of passes from 2012 to 2015. And that is backed up by the FPPGoE.

Now that the Bengals are strapped with the likes of John Ross and Joe Mixon to go with A.J. Green and company, Dalton should absolutely crush his current MFL10 average draft position (ADP) of being the 16th quarterback off the board.

Alex Smith had his lowest touchdown season of his time in Kansas City with just 15 in 2016. However, he also rushed for five scores, which is the highest of his career. Since this study only captures fantasy points scored via passing, it may be unwise to pencil in Smith for a huge uptick this season.

Of course, if you like the narrative of him being pushed by rookie Patrick Mahomes, maybe this is the information you need to convince you to take him.

Tyrod Taylor left quite a few points on the table based on his passing performance last year. He played most of 2016 without Sammy Watkins, so with him healthy and rookie Zay Jones now in the fold, Taylor stands to potentially breach the top six quarterbacks in 2017, and should destroy his ADP of being the 18th quarterback off the board.

The first quarterback after Prescott was Ben Roethlisberger (122.0), which puts his rookie year immediately in the presence of the league MVP (Ryan), four probable Hall of Famers (Brees, Rodgers, and Brady), and one of the hottest young names at the position (Cousins). If Dallas struggles to hold leads and the team lets Prescott throw more, he could instantly enter fantasy's elite.