On Wednesday, running back LeGarrette Blount signed with the Philadelphia Eagles. The soon to be 31-year-old running back will ink a one-year deal, and it seems like it'll make sense for everybody.

The Philly backfield battalion of Darren Sproles, Wendell Smallwood, and rookie Donnel Pumphrey doesn't have much in the way of size. Blount does. And lots of it.

Last year, Blount was an interesting case of running back volume and efficiency with the New England Patriots. He carried the ball 299 times, which trailed only Ezekiel Elliott among all NFL running backs.

However, in terms of Net Expected Points (NEP), he didnâ€™t add much overall value to the Pats offense. Blount was 10th among 19 running backs with at least 19 carries in Rushing NEP per attempt. By Success Rate -- the percentage of plays that positively impact NEP -- he was 15th in that same group, at just 37.5 percent.

But Blount did add value at one specific thing in 2016: scoring touchdowns, specifically 18 of them, which led the league. When the Patriots got close to scoring, it was Blountâ€™s game. Inside the 10 last season, Blount had more carries (42) than Tom Brady did pass attempts (32).

And while many teams get run heavy in this area of the field and Brady played just 12 games to Blount's 16, no team ran more frequently in the red zone than the Patriots.

Take a look at the following chart, which shows each teamâ€™s rushing leader inside the 10, along with that playerâ€™s touchdowns scored. 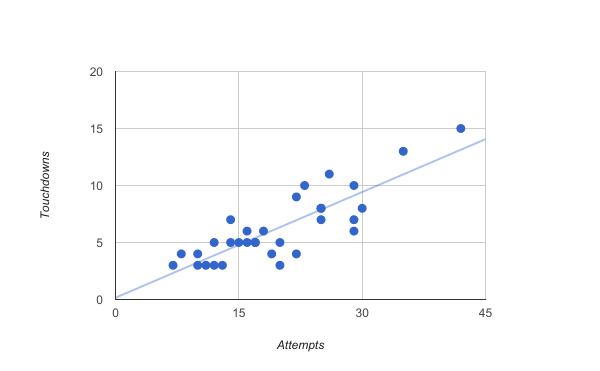 See that dot all the way on the top right, sitting all by its lonesome? Thatâ€™s Blount. He had 42 carries inside the 10, seven more than the next closest player, David Johnson, and 12 more than Devonta Freeman in third.

(Interesting side note: 15 of Blountâ€™s 18 touchdowns came on those 42 carries, not an otherwordly touchdown rate. Scoring a touchdown on 35.7 percent of those carries was only ninth among backs with at least 10 attempts inside the 10. In 2015, Blount scored on 31.3 percent of his 16 carries.) Blount was worth 0.28 Rushing NEP per attempt with a Success Rate of 50 percent.

He was still a 1,000-yard rusher outside the 10, but that was due primarily to heavy volume. On his 257 carries anywhere else on the field, Blount was worth -0.04 Rushing NEP per attempt and had a Success Rate of 34.6 percent.

Blount's role in Philly is TBD, but don't surprised if he gets the majority of carries. (That said, he likely wonâ€™t see nearly-300 attempts next season, if ever.) Even if Blount becomes the clear lead back, his age and diminished workload would signal major regression. But potential carries are likely to open up in Philly with the apparent impending release of Ryan Mathews.

Mathews was the Eaglesâ€™ lead back last season in the games he was healthy. He led the team with 155 carries, 661 yards, and 8 rushing touchdowns. On a per-carry basis, he was slightly more efficient than Blount and had a much higher Success Rate:

In fairness, the Eagles running backs had a Rushing NEP per carry of 0.02 on the season and a Success Rate of 45.7 percent, compared to 0.03 and 41.5 percent for the Patriots' backs. Still, Blount was below his team average in each of those marks.

Mathews was also just as productive where Blount thrived, as all eight of his touchdowns came from inside the 10. In fact, just about every Eagles back had some success near the goal line.

Every Philly back other than Sproles was an exceptional value around the end zone, thanks in part to the Eaglesâ€™ strength along the offensive line.

If Mathews is gone, this opens up some opportunity for Blount to dominate in the red zone again. If Mathews is indeed given his walking papers, Blount would take his share of the carries inside the 10. Blount could also save the Eagles from trying to use Carson Wentz as a running threat in that area of the field.

Take those opportunities and thatâ€™s near 30 carries already for Blount around the end zone. If Blount is put into that role, he could be an immediate upgrade for the Eagles. Itâ€™s all about how, when, and where Philly offensive coordinator Frank Reich chooses to deploy his new weapon.

Limiting Blountâ€™s workload and putting him in where heâ€™s most effective is probably going to be the best use of him at this point in his career. Thereâ€™s no need to make him a workhorse. He could also help in short yardage situations, where he was worth 0.40 Rushing NEP per attempt with a 65.4 percent Success Rate on 26 carries with one or two yards to go at any place on the field.

Blount wonâ€™t have to carry the load for the Eagles, but given the right opportunity, he could keep carrying the ball into the end zone. Makes sense for everybody.