Fantasy Football: Which Running Back Could Be This Year's Todd Gurley?

Todd Gurley was bound to hit some sort of wall during his Sophomore season. Because his Freshman year just wasn't sustainable.

And this isn't annoyingly stupid hindsight analysis. We wrote about it here at numberFire: Gurley's rookie season saw ridiculous efficiency despite his overall body of work lacking the type of numbers you'd like to see given that efficiency.

Allow me to explain.

At numberFire, we often use a metric called Net Expected Points (NEP), which helps determine the number of points (real ones) a player is adding (or losing) for his team versus expectation. If you want to learn more about the metric, check out our glossary.

In 2015, Gurley was pretty efficient within the metric. Among the 44 running backs with 100 or more carries that season, he was 5th in Rushing NEP per rush. That's why we were -- and, to be honest, still are -- so excited about Gurley's potential in the league.

As we know, though, an average can be skewed. That's why yards per carry and something like Rushing NEP per rush, stand alone, don't always tell you the entire story. When you combine Success Rate -- the percentage of positive runs made by a running back -- you can start to understand the tale a little better.

If a player has a high Success Rate with low per-rush efficiency, it tells us that, while he was consistently making positive plays, he wasn't doing so with big, overly effective runs.

On the opposite end, we've got Gurley's rookie season: One with strong per-rush efficiency and a low Success Rate.

He was making a living off of big runs.

Here's a look at the 86 instances where a running back has carried the ball 100 or more times over the last two years, charting Rushing NEP per rush versus Success Rate. As you'll see, Gurley's first year in the league wasn't all that normal. 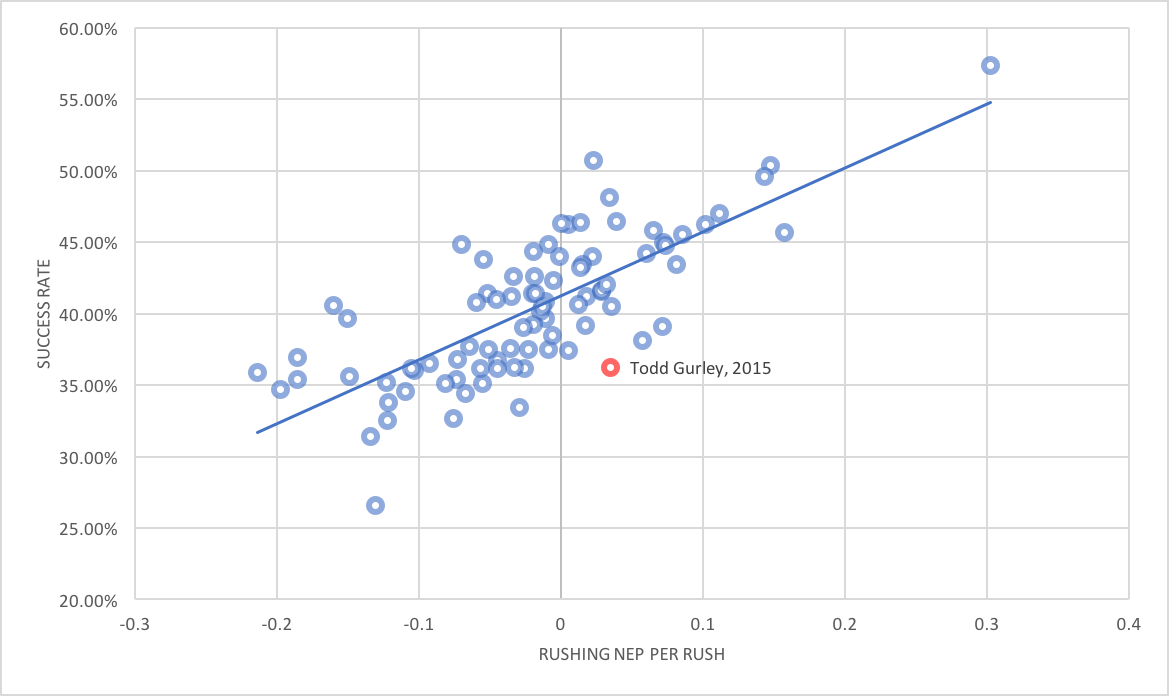 Given Gurley's per-rush average, we would've expected him to have a Success Rate of 42.83% during his rookie season. Instead, it was 36.24%. That difference -- 6.58% -- was the second-largest difference seen among the entire 86 running back sample.

In other words, Gurley was overperforming like a mad man.

What was it that made Gurley a high-end fantasy football draft pick in 2016? Well, he performed at a high level in 2015 as a lead back, and he had a lot of unknown upside given the limited sample from which we were drawing.

This super-scientific reasoning leads us to three backs who could theoretically be this year's Todd Gurley: Melvin Gordon, Jordan Howard, and Jay Ajayi.

I hope you're nodding your head in approval.

Let's take a glance at the same chart above, but this time, we'll highlight the 2016 seasons for Gordon, Howard, and Ajayi, who all finished as top-12, RB1 backs in fantasy football last year. 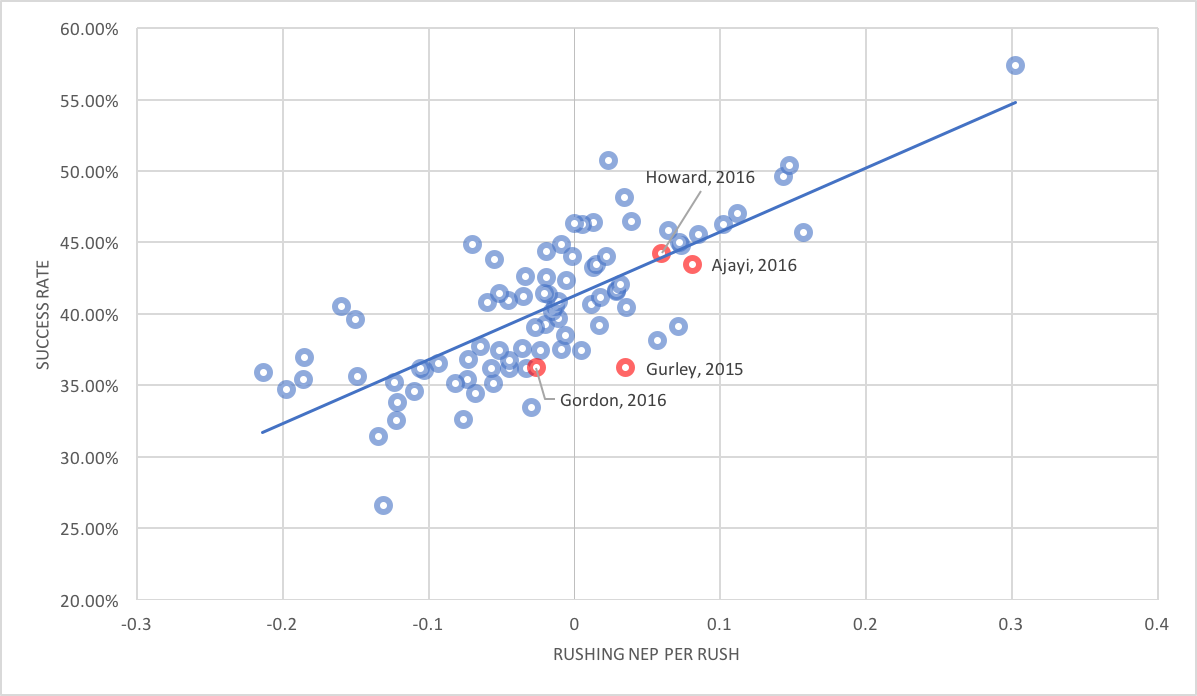 Mathematically, that's the case, too. In fact, of the 86 running backs in the sample, Gordon's actual Success Rate versus his expected Success Rate saw the eighth-largest discrepancy in the wrong direction. Remember, Gurley's was the second-largest.

It wouldn't be fair to deem Gordon an auto-bust this season, though. His situation is entirely different from Gurley's. In 2016, for instance, Gordon had 20 carries within his opponents' 5-yard line, and 29 within his opponents' 10. Those were the third- and fourth-highest marks among all running backs, respectively.

And it's because the Rams were -- and still are -- ineffective offensively, while the Chargers don't have those struggles.

There's more upside for Gordon in the passing game, as well. Going into last season, we weren't really sure how Gurley would be used in the Rams' passing attack. He saw just 26 targets his freshman year, and that rose to a decent-enough 58 targets last season.

Gordon, meanwhile, is coming off a season with 57 targets (roughly 0.7 targets per game more than Gurley had his rookie season), and he has little competition in the backfield for passing-game volume in the Chargers' offense.

What this all means is that, yes, if you were to pinpoint one player who performed like Todd Gurley and could push a disappointing result in 2017, it's Melvin Gordon. Because Gordon, as a running back, isn't as good as his fantasy numbers dictated last year.

But given Gordon's situation, it may not matter.

Melvin Gordon Isn't Playing as Well as You Might Think