Why Cal Is a Big Favorite Over Hawaii

Aaron Saunders  —  @SaundersSports Aug 26th, 2016
Share on Facebook Share on Twitter
The Golden Bears will certainly miss first overall pick Jared Goff, but hereâ€™s why Cal fans have no reason to panic in college footballâ€™s opener Down Under.

It wonâ€™t exactly be Clemson-Alabama, but youâ€™ll have to excuse college football fans if there is a palpable excitement for the California-Hawaii game in Australia Friday night.

The great thing about college football is that a passionate fan can find a reason to watch really any game, even a potential blowout like this one. A player. A unit. A scheme. A betting angle. You name it.

The good news for even the casual fan whoâ€™s been deprived of football for the last seven months is that Cal-Hawaii (Cal -19.5, over-under 64.5) offers a few elements that should make the game watchable, perhaps even entertaining.

And for bettors there is no better time than August to find some inefficiencies in the market. Cal-Hawaii is no exception.

When Cal Is on Offense

If you need a reason to tune in on Friday at 10 p.m. EDT, look no further than new Cal quarterback, Davis Webb. The Texas Tech graduate transfer will breathe immediate life into an offense rocked by attribution this offseason. According to SB Nationâ€™s Bill Connelly, Calâ€™s returning only 15 percent of their offensive production from last season, worst in the nation.

Of course, Cal coach Sonny Dykes isnâ€™t expecting Webb to be a Jared Goff replica. But Webb holds massive potential as a pocket passer in Dykesâ€™ Bear Raid system, if he can resist throwing into tight coverage.

Steve Palazzolo of Pro Football Focus wrote, â€œWebb is often mechanical and robotic in the pocket and a little too slow to get through his progressions. However, the flashes are enough to think that Webb can have success in the Pac-12, particularly since heâ€™s moving to a similar offensive system and his +5.4 passing grade was fifth in the Big 12 as a true sophomore.â€

Hawaiiâ€™s defense will get the unfortunate assignment to try to slow down the high-octane Cal attack. New coordinator Kevin Lempaâ€™s job got even more difficult when the team dismissed the unitâ€™s best player, Kennedy Tulimasealii, this summer. Lempa does return some run stoppers along the defense line and potential in the secondary, but moving to a 4-3 defense with limited talent doesnâ€™t ensure improvement from Hawaiiâ€™s 2015 110th ranking, according to ESPN Football Index (FPI) efficiency numbers.

Our projections are calling for Cal to put on a show at the expense of the Hawaii defense, including 327 yards passing and 214 rushing.

When Hawaii Is on Offense

As bad as Hawaiiâ€™s defense was in 2015, the offense was even worse. The Rainbow Warriors finished last season ranked 121st in efficiency, according to FPI and 116th by S&P+. Hawaii couldnâ€™t crack the FBSâ€™ top 100 in rushing or passing efficiency.

Enter new head coach Nick Rolovich, who comes back to the Big Island with an impressive resume. Along with June Jones, Rolovich helped develop the run-and-shoot at Hawaii. During his four years as the offensive coordinator at Nevada, Rolovich perfected the Pistol offense and helped make Colin Kaepernick a recognizable name among college football diehards, long before he suited up for the San Francisco 49ers.

During his four campaigns running the Wolfpack offense, Rolovichâ€™s unit averaged a 63rd ranking in S&P+. During that same period, Hawaii never finished a season better than 103rd and twice ended up in the FBSâ€™ bottom 10. 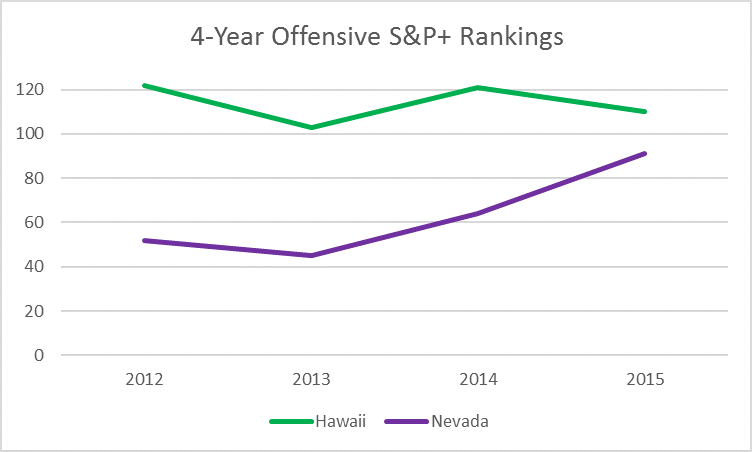 In 2015, Calâ€™s defense was about as ineffective as Hawaiiâ€™s offense. On the positive side, the defense has progressed each year in the Dykes regime. But suggesting that the 2015 Cal defense was respectable is still a stretch: the Bears finished 84th in defensive S&P+ and 96th in points per opportunity. 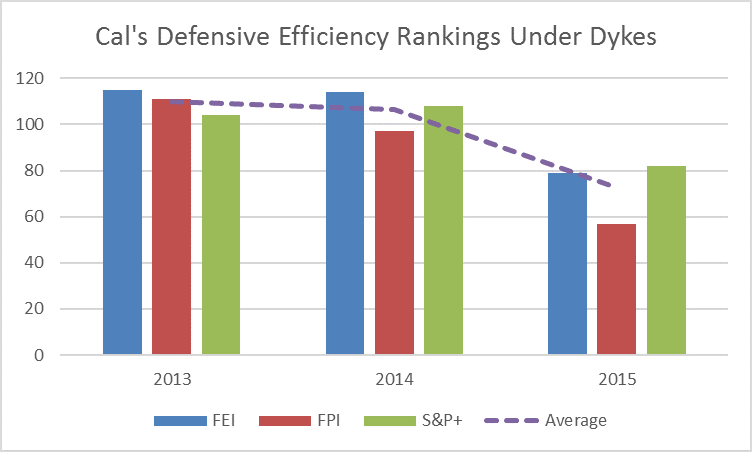 It appears that Fridayâ€™s matchup will pit the Stoppable Force against the Movable Object.

If there will be a potential bright spot for the Rainbow Warriors, it will be in the running game, where they bring back Paul Harris and Diocemy Saint Juste, two big-play threats. Our projection of 118 rushing yards for Hawaii isnâ€™t exactly optimistic, but it is considerably more encouraging than the 183 passing yards predicted.

Considering that Hawaii will likely be playing from behind for much of the game, under 200 yards passing simply wonâ€™t give the Rainbow Warriors a chance to score even garbage-time touchdowns.