Winning Your Office Pool: The Statistical Value of Every March Madness Team

Bryan Mears  —  @bryan_mears Mar 16th, 2015
Share on Facebook Share on Twitter
The best teams aren't always the ones with the highest seeds. When filling out your bracket, which teams will provide the most value?

I'd guess the majority of people selecting teams in their March Madness bracket will rely on the notion that if a team is seeded higher, they must be the superior team. However, it doesn't always work that way. Sometimes teams are drastically under- or over-seeded with regard to their actual on-the-court prowess.

If you can exploit that knowledge, you can identify which teams will provide you the most "value" in your brackets and potentially pick upsets that people miss.

To do this, I made a table of each team's actual seed in the bracket. From there I looked at both our power rankings here at numberFire and KenPom.com's Pythagorean Rating rankings to give each team a hypothetical "seed" if they were seeded by statistics, not a committee. I then averaged the two and got a "value" score for each team.

A couple things to note: I tried to make it so the value column would accurately reflect just that: value. For example, by the numbers, Arizona is (kind of) twice as valuable as they were seeded (they were given a 2 seed even though they statistically are a 1 seed). However, the difference between a 1 and 2 seed isn't as drastic as the difference between a 4 and 8 seed, although they're both twice as valuable on paper. The value column is adjusted for that.

This isn't to say that the teams at the top are the best teams and are guaranteed to win anything. As you'll see, Kentucky provides no value -- they're rated as 1 seed and are indeed a 1 seed -- so they're at a value rating of 0.00. The point is to look at teams by their statistical resume instead of their somewhat arbitrary, committee-decided bracket seed. Again, exploiting the difference between the two can lead to great insights and success in winning your bracket.

Ok, onto the tables. I split it up into four sections, starting with the positive values.

We have written quite a bit about Texas this year, and they continue to be a very difficult team to peg in regards to statistical value versus public perception. They've lost to a ton of ranked teams while dealing with some unfortunate injury situations. Despite that, they boast a top-20 defense and a top-50 offense. They have the talent to go on a run, and could provide some value if you want to pick a double-digit seed to make it to the second weekend.

Ohio State has been at the top of this list the entire season. Despite being another double-digit seed, they are statistically good enough to be somewhere between a 4 and 6 seed. They also have one of the best players in the nation in sure-fire top-five NBA Draft pick D'Angelo Russell. And remember, March Madness is usually dominated by guards which Russell is. Ohio State is a team to watch out for as they're statistically undervalued and have a stud point guard to lead them.

It was very interesting to see Utah come in as a 5 seed, as we've had them rated very highly all year long, too. In fact, our power rankings have them as the eighth-best team in the entire nation. Betting on a top-10 team when everyone else thinks they're a 5 seed -- that's value.

This group is comprised of teams whose bracket seed is right on par with how they are rated statistically. Pretty much, what you see is what you get. For some teams, that's really good play (Kentucky), and other teams, it's middle-of-the-road production (Mississippi).

Interestingly, there were only eight teams out of 69 (11.6%) in the tournament whose bracket seed and "statistical seed" matched up. I'm not sure what that means -- if it's because the selection committee doesn't put a lot of stock into stats or what. It is curiously low, however. 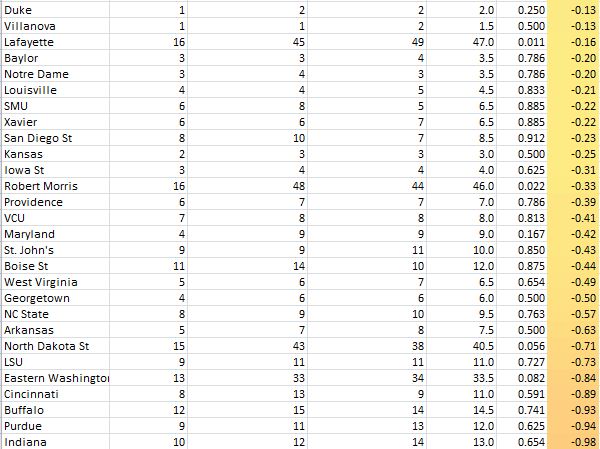 Here are the teams who are seeded a little bit higher than their statistical resume implies, but for some teams (Notre Dame, for example) it's not a very drastic difference. The Fighting Irish are a 3 seed in the tournament, and KenPom values them as such, but our numbers say they're right in the middle of 4-seed territory. It's worth noting, but it's obviously not a huge disparity.

Here you get some of the lower seeds, like Robert Morris as a 16 seed. They don't have a terribly low negative score, but as a 16 seed, they aren't really expected to do much in the first place.

There are also a couple teams that our numberFire rankings and KenPom's have way off -- Cincinnati is an 8 seed, but numberFire doesn't think that highly of them (13 seed territory) while KenPom thinks they're only slightly overseeded (9). Boise State is another interesting one to look out for.

Lastly, we have our teams who represent the worst values. These are mostly the bottom teams of the tournament who are in it because they got an automatic bid, despite being not even in the top half of the nation's teams.

Of note, Harvard is a 13 seed playing North Carolina on Thursday evening, but both numberFire and KenPom think they are way overseeded. They do have a notable coach in Tommy Amaker (a Duke disciple), and gained some notoriety by beating Cincinnati as a 12 seed last year. That probably played into them getting a higher seed than their statistical resume warranted.

Other than that, you have mostly your 15 and 16 seeds who provide little value, though not zero -- 15 seeds can definitely take down the likes of Duke, but 16 seeds obviously face a harder task.

Good luck in all your bracketing.

The 5 Most Underrated Teams in the NCAA Tournament

The 5 Most Overrated Teams in the NCAA Tournament