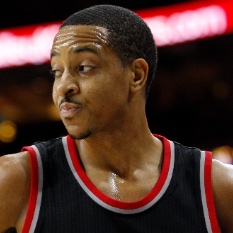 C.J. McCollum has broken foot, out for Trail Blazers at least 4 weeks

Portland Trail Blazers guard C.J. McCollum has been diagnosed with a small hairline fracture to the lateral cuneiform in his left foot and a mid-foot sprain.

McCollum will wear a walking boot and be re-evaluated in four weeks. Rodney Hood started Monday in place of McCollum and recorded a season-high 21 points (9-of-14 field goals) with 2 boards, 2 assists, 1 steal, and 2 triples over 25 minutes. Anfernee Simons provided minimal production with additional minutes off the bench. McCollum's absence should also lead to more usage for Gary Trent Jr. and Derrick Jones Jr.

Hood scored 26.4 FanDuel points as a starter on Monday and recorded the second-highest usage percentage (29.6) on the Trail Blazers behind Damian Lillard (40.3). Carmelo Anthony (22.9) was the only other player on the team with a usage rate higher than 20 percent.