The Warriors Should Rest Stephen Curry for the Entire Second Round

Just to list a few of his accomplishments, this season he shattered his own all-time mark with 402 three-pointers made.

He became one of only eight players in NBA history to shoot above 50% from the field, 40% from three-point land, and 90% from the free throw line.

And he ranks number one in our player power rankings with a 26.3 nERD -- our own proprietary metric which measures a player's total contribution throughout the season representing how many games above .500 a league-average team would gain by adding him -- by a wide margin. The reigning MVP also led his team to a record 73 regular season wins.

All that said, while there is no question that the Warriors are a better team when Curry is healthy, Golden State is a pretty damn good team without him.

Curry sprained his MCL during the final play before halftime of Game 4 against the Houston Rockets in the opening round of the NBA Playoffs.

In the 10 quarters since -- Game 4 was tied when the Warriors' star went down -- the Western Conference regular season champs are 3-0 and have outscored their opponents by 72 points.

How has Golden State been able to thrive without the probable unanimous MVP?

It starts with the team's two other All-Stars: Klay Thompson and Draymond Green.

Although Curry has received more fanfare for his outstanding shooting, and rightfully so, he is just one half of the most prolific shooting duo in the history of the Association.

After knocking down 276 shots from long range this season, Thompson now owns the record for most three-point shots made by any human being not named Stephen Curry.

The two-time All-Star guard has also accomplished something that his fellow Splash Brother has never accomplished, pouring in 21 three-pointers in the last three games, an NBA record. 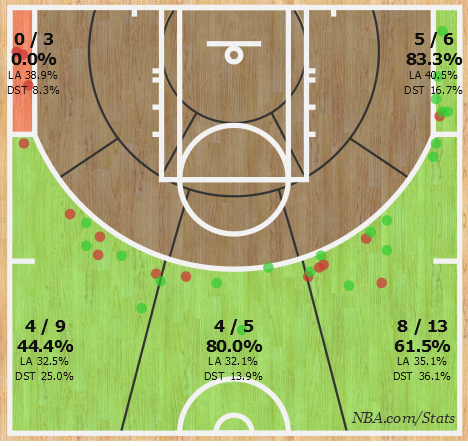 Not to be outdone by his hot-shooting teammate, Green has added 18.7 points, 10 rebounds, and 8.3 assists per game of his own, while earning a ridiculous 90 plus/minus during those three games.

He has been the team's emotional leader and has anchored a defense that has allowed just 93.7 points per game and an excellent 101.9 Defensive Rating over that span.

As great as these two stars have been, it takes more than just two players to dominate three games against playoff-caliber teams. In fact, Golden State has been one of the deepest teams in the league all season long, featuring eight different players who averaged more than 15 minutes per game and accumulated a nERD of 1.8 or better, including the likes of Andre Iguodala, Harrison Barnes and Shaun Livingston, who has done a tremendous job filling in as Golden State's starting point guard in Curry's absence.

Although he does lack the ability to consistently knock down three-pointers (he's got 63 career three-point attempts and just 12 this season), Livingston's unique size and length at the point guard position creates an entirely new set of problems for opposing teams.

His ability to post up smaller defenders has continually led to easy buckets on the offensive end, but it's been his defensive impact that has been most glaring. Livingston's length clearly bothered the much smaller Damian Lillard and C.J. McCollum in Game 1, as neither Lillard nor McCollum were able to get to the rim with their usual ease.

They were only able to shoot a combined 28% from the field on 43 attempts as they were shadowed by Livingston and the aforementioned Thompson for the majority of the game.

The Warriors' defense is built on the ability to run switches, with guys like Green, Thompson, Iguodala, and Barnes possessing the size, length, quickness, and athleticism to guard multiple positions.

This is something that you often cannot rely on from Curry due to his lack of size and strength. However, with the much larger Livingston on the floor, Golden State can more seamlessly switch on the defensive end, making them a stronger, more cohesive defensive unit.

As a result, the team has managed to defend the perimeter and effectively funnel ball handlers into traffic, where shot blockers Green and Andrew Bogut have had a field day.

Whereas most teams would be in serious trouble without their best player, let alone the MVP of the Association, the Warriors are uniquely positioned to weather the storm.

In fact, given the favorable matchup against a Portland squad that ranks just 16th in our team power rankings, our algorithm gives Golden State a 79.5% chance to reach the Western Conference Finals even if Curry were to miss the remainder of the series.

With a much more daunting matchup against either the Spurs or Thunder -- the first- and third-ranked teams in our power rankings -- on the horizon, why risk further injury to your star when the team is more than capable of knocking off an inexperienced, overachieving Blazers team without him?

Rest up and get healthy Steph, because the Dubs are going to need you at full strength in order to finish the historical campaign that began with a 73-win regular season.