Austin Swaim  —  @ASwaim3 Jun 8th, 2022
Share on Facebook Share on Twitter
Draymond Green filled up the stat sheet -- and Boston's collective headspace -- in Game 2. Which other FanDuel plays stand out as the series shifts to Boston?

In a traditional FanDuel NBA lineup, you have a $60,000 salary cap to roster nine players. The salary cap is the same in the single-game setup, but the lineup requirements are different.

You select five players of any position. One of your players will be your MVP, whose FanDuel points are multiplied by two. You also choose a STAR player (whose production is multiplied by 1.5) and a PRO (multiplied by 1.2). Two UTIL players round out the roster, and they don't receive a multiplier for their production.

This makes the five players you select essential in more than one way; you need to focus on slotting in the best plays in the multiplier slots rather than just nailing the best overall plays of the game.

Read this piece by Brandon Gdula for some excellent in-depth analysis on how to attack a single-game slate in NBA DFS.

Also, BODYARMOR Edge and FanDuel have teamed up to give you a free chance at $10,000 in cash prizes. Join the BODYARMOR Inside Edge contest for your chance to win. 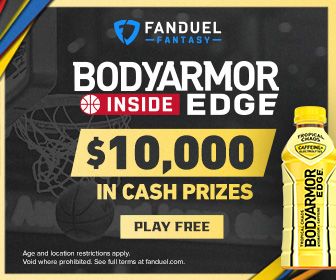 Wednesday's injury report is much more about effectiveness than availability.

That's especially the case with Boston's Robert Williams. Williams is listed questionable once again with his knee bruise, leading to up-and-down production all postseason.

As for Golden State, Otto Porter (foot) and Gary Payton II (elbow) both played substantial roles in Game 2, so they're likely closer to probable than their questionable listing. However, Andre Iguodala (knee) didn't play, and at this point, it's hard to see Iguodala carving out a substantial role with so many injuries chained together.

Jayson Tatum ($15,500): This series will change headed to Boston, indicated by the Celtics going from 3.5-point 'dogs in Game 2 to 3.5-point favorites at home. That's why it's no slam dunk that Stephen Curry repeats his two optimal MVP performances from San Francisco. Curry's three-point rate on the road in the playoffs has dropped from 40.4% at home to 36.4% on the road. With that, Tatum is the clear-cut top MVP candidate. He has posted a strong 28.2% usage rate combined with 11.5 potential assists per game in the first two games of the series.

Al Horford ($13,000): Oddsmakers are telling you that Boston should rebound in this one beyond their Game 2 blowout, and Horford could follow suit. He didn't take a single three-pointer after splashing six in Game 1, but the long-term expectation is likely somewhere in the middle. Importantly, many will likely ignore Horford, coming off the two-point stinker, for salary savings from the mid-range, and that makes him an interesting STAR or PRO play in a format where differentiation is crucial.

Draymond Green ($11,000): Game 2's instigator might be at risk of getting thrown out of one of the remaining games after saying he's earned the ability to not get kicked from them, so we'll see. However, it's hard to argue with Green's production when he eclipsed 30 FanDuel points while scoring just 9 real-life points. Notably, Draymond played 34 minutes in a total blowout, and to match Boston's size and physicality, he'll likely encroach 40 minutes the rest of the series.

Klay Thompson ($10,500): My single favorite player to roster on this slate will be Klay, who has been tossed in the washing machine for three days after not joining in on the Warriors' fun in Game 2. He had just 11 points, but unlike Curry and Jordan Poole, his outside shooting hasn't taken a hit on the road in the playoffs. He's been a 38.9% shooter from deep at home, and that mark is 38.2% on the road. Perhaps, Golden State will need the veteran for a sizable contribution if Steph's shots aren't falling at will like the first pair of games.

Derrick White ($9,500): Despite coming off the bench, White is Boston's fifth key player in most situations. Robert Williams' knee injury must be worse than advertised given local reporters are begging to rest him, and he played just 14 minutes in Game 2. White has filled in admirably with at least 30 minutes and 24 FanDuel points off the bench in both games out west. There are rotational questions all throughout the value tier, but White has the single full-time role, so expect him to be enormously popular.

Gary Payton II ($7,000): Payton's 15.1 FanDuel-point total in Game 2 might keep him under the radar, but in his first real game back from injury, he continued to chew into Jordan Poole's role off the bench. The defensive stopper has now played at least 23 minutes in each of his last three full games, and Poole hasn't played more than 24 in any of those. It will be a toss-up of which guard -- or Otto Porter -- sees the heaviest workload off the Golden State bench should this one stay close, yet I -- like most coaches -- will always choose the defensive-minded option in the NBA Finals.