A Visual Breakdown of the NBA's Remaining Schedule

As the All-Star break approaches and only a few months of the season are left, playoff races are getting tighter and tighter. Last nightâ€™s game between the Thunder and Knicks was only one game, but losing to a bottom-five team could be the difference between playoffs and staying home for Oklahoma City once the regular season ends in April.

The Thunder currently sit at 23-23, a half-game back from the Pelicans, but several games back from the Suns, who sit right now in the West's eight spot. The Thunder need Kevin Durant healthy and cannot afford to blow any more games on their schedule against non-playoff squads.

Speaking of schedules and playoff teams, Iâ€™ve created a colored graphic that gives a weekly breakdown of how many games each team has against the top half of the league -- teams .500 or better. I know there are different ways to judge strength of schedule, but I think this gives a fair view of how many tough games are left for each team. In this view, a game against the Bucks and against the Warriors is counted the same, so itâ€™s not tiered. Doing that would just make another SOS statistic and I wanted to keep things simple. 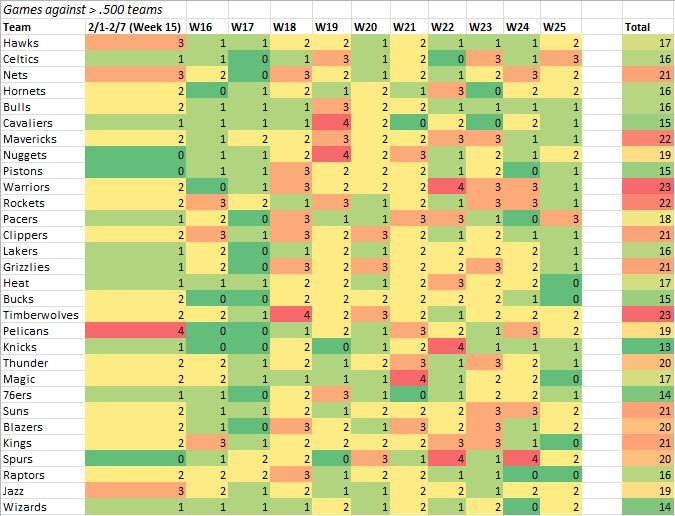 The Warriors and Timberwolves have the most difficult schedules remaining with 23 games against top half of the league competition. The Warriors have built up enough equity where theyâ€™re probably ok with dropping a couple games, especially during a brutal stretch in Weeks 22-24. The Timberwolves are probably equally fine with the schedule â€“- the Knicks have gone on a mini-run lately and have an easy schedule along with the 76ers. The Timberwolves could end up with the leagueâ€™s worst record and highest chance at the number-one seed in the 2015 NBA Draft.

The surging Cavaliers have a tough week at the beginning of March, but then it becomes smooth sailing until the finish line in April. They have two separate weeks where theyâ€™ll play zero playoff teams and will definitely use those and the easy weeks at the end of the schedule to rest up LeBron James and get ready for the playoffs.

The race for the last seed in the Eastern Conference could likely come down to the final weeks. The Hornets donâ€™t have any truly devastating weeks coming up, so they have a little time to work out the kinks without Kemba Walker. However, the last four weeks will be imperative for them if they want to make the playoffs. The Nets, on the other hand, have a very tough schedule the rest of the season â€“ the hardest of all East teams â€“ so things will be tough moving forward.

Both the Pistons and the Heat have an easy final week, although the Heatâ€™s is pretty steady for a while before that. The Pistons sit at 17-30 and will have to really make up some ground if they want to get into the race. The Heat are probably fine at 20-25, which is a telling sentence for the East, but that stretch of steady tough games could be an issue if Chris Bosh or Dwyane Wade are out for any time.

A constant theme in this article and throughout the NBA season is the East versus West disparity. You can see that in this schedule graphic, as the West will really beat up on each the rest of the year. Look at the difference between the Rockets and the Wizards -â€“ Houston has to play a grueling 22 games against great competition, while the Wizards just have a tough game a week and end with only 14 matches against top competition.

It will be interesting to see how much this affects momentum or rest versus rust, if you believe in any of those ideals. Will the Wizards come out with a bang in the first round of the playoffs because of their easy schedule? Will the Spurs be worn out after two separate weeks of four tough games in the last month? Whatever happens, it looks like a fantastic NBA season will continue to be great over the last final months.