Do NBA Teams Ramp Up Their Defenses in the Fourth Quarter?

Bryan Mears  —  @bryan_mears Dec 30th, 2014
Share on Facebook Share on Twitter
There are a lot of preconceived notions about NBA defenses that can now be looked at by data thanks to SportVU cameras. What can we learn about defenses by quarter?

The biggest complaint among casual NBA watchers is that there isnâ€™t much defense, especially at the beginning of the game. It isnâ€™t until the game is truly on the line that teams really clamp down and play tough, hard-nose defense you see every possession in college, they say. Is it true?

Well, defenses arenâ€™t necessarily bad earlier in the game, but the data does show that there is some truth to the fact that defenses tighten up as the game goes on. Interestingly though, itâ€™s not gradual by each quarter -- thereâ€™s a pretty big jump once the final, fourth quarter comes. 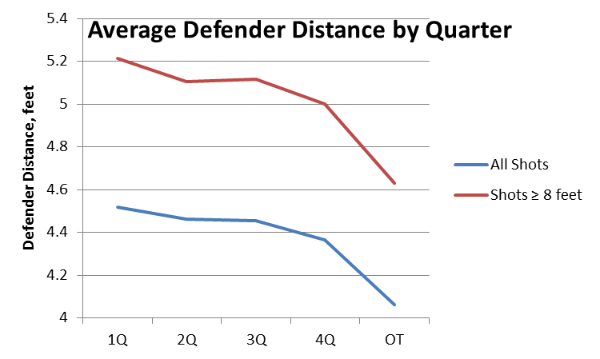 As you can see, more open shots come in the first quarter, which is intuitive -- defenses adjust as the game goes on. The dip when the fourth quarter hits is the interesting part -- it may not seem like much, but considering weâ€™re analyzing thousands of shots that were taken a different distances, a minor change in average defender distance warrants notice.

When overtime comes, things ramp up even more. The league has defined an open shot as one where the defender was four feet away or farther. The average jumpshot is considered uncontested by this definition, but with thousands of open shots and dunks and layups, this is also fairly intuitive. So when that defender distance dips almost to four -- like it does it overtime -- and the average shot is contested, players are really scrambling and sticking with players.

What would be an interesting study is how this trend continues (or doesnâ€™t) in the playoffs. Do teams ramp up their defenses a bit earlier in a playoff setting? Does it start in the third or is it the whole game? Whatâ€™s the average defender distance on jumpshots in Game 7â€™s of the playoffs? As we get more and more data thanks to sophisticated tracking cameras and software, weâ€™ll have more of this information available.

How could this information be relevant? Iâ€™m just musing here, but perhaps if a coach was aware of the trend (and most probably are, at least subconsciously) they could speed up their pace and try to create more possessions earlier in the game when defenses are the most relaxed. Perhaps they could take more 3-pointers since theyâ€™re less contested and have higher expected points per shot, and then be aggressive and attack once the defense ramps up in the fourth.

As a basketball community, weâ€™re getting a lot of really cool data (I compiled this from the great NBAsavant.com), and weâ€™re still in the process of figuring out what is important and what is noise. And even further -- how does the important stuff apply to on-the-court tangible things? Iâ€™m very interested in the new defender distance data, so Iâ€™ll probably continue to post findings on the matter -- let me know what you think and we can learn together.

Is There a Strong Relationship Between Defender Distance and Field Goal Percentage in the NBA?