This season, the NBA will implement a new format for the All-Star Game, doing away with the traditional East vs. West matchup that has been the standard since 1951.

Instead, the top two vote-getters from each conference -- in this year's case, LeBron James and Stephen Curry -- get to pick the teams playground-style from the pool of All-Stars voted in by the fans, players, media, and coaches.

Well, almost playground-style. They actually did it privately, via conference call.

Anyway, here are the teams.

There are lots of interesting storylines going on here.

LeBron and Kyrie Irving are reunited for the first time since the big trade that separated them this summer (hey, and Kevin Love is there, too). Kevin Durant is back with Russell Westbrook and separated from the three Warriors teammates he left Russ to join up with. Victor Oladipo is also back with Westbrook, a guy who many think held 'Dipo back last year. Kentucky alums DeMarcus Cousins and John Wall get to reconnect. We finally get to see LeBron paired with guys like Anthony Davis, KD, and Westbrook. Just imagine a LeBron and Russ fast break!

Apart from those little sideshows, however, the big question on everyone's mind is as the tweet says: who has the better team?

In order to determine that, we'll use one of our proprietary metrics, numberFire efficiency, which is an estimate of the point differential that a league-average team would have in a game with that player as one of the five starters, based on both offensive and defensive production on a per-possession basis.

If you've got one game to play, which of these groups of 12 players would have the best chance of winning, based on efficiency?


According to our numbers, Steph's team beats out LeBron's in a single-game setting, with a combined nF efficiency of 44.1 to LeBron's 31.2. Not only does Curry have a better team, he has a better starting lineup and a better bench (graphics courtesy of numberFire's Brett Oswalt). 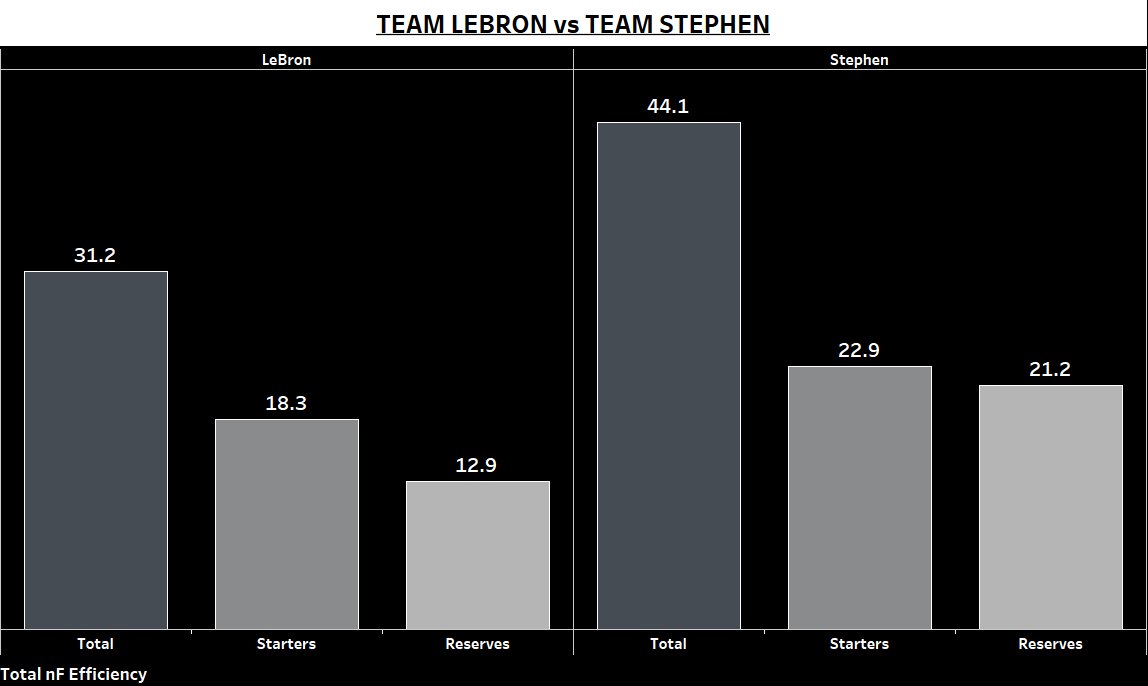 For an idea of just how much better Steph's pool of players is than LeBron's, you can also compare these two graphs.

Of course, a lot can happen in the actual game to fly in the face of analytics. Namely, the fact that players don't really care all that much about this contest.

But that's ultimately why there's a change to the format after 66 years of the status quo in the first place. Let's see if this new way of doing things manages to spice up the competition at all.