They say imitation is the sincerest form of flattery, and while I don't really know who "they" are, I do know that imitating perfection isn't a terrible idea in daily fantasy sports.

That's why we're going to dig into the 161 perfect lineups on FanDuel from the NBA's 2016-17 season and see what information we can glean.

There's plenty to cover, so let's not waste any more time.

If you haven't played on FanDuel before, just know that you need to roster nine players (one center and two point guards, two shooting guards, two small forwards, and two power forwards) and remain at or under a $60,000 salary cap.

The NBA offered up a game on 162 days this past season (one of which was a makeup contest between the Minnesota Timberwolves and the Portland Trail Blazers on April 3rd). That means FanDuel offered contests on 161 different days of the year.

Now that we've tied that all up, let's keep on truckin'.

However, 69 of the lineups (42.9%) used at least $59,800 of the max, so don't plan on wasting too much of your virtual salary and still putting up a huge fantasy point total.

Stacking will always seem backwards because basketball stats aren't really correlated, by which I mean that only one player can grab a rebound or make a shot on a given possession.

Still, of the 121 slate featuring six or more NBA games, at least one pair of teammates made the perfect lineup in 105 of them (86.8%). Plus, 18 (14.9%) had at least one trio of teammates. The only two four-man stacks all yer came on four- and five-game slates, which is understandable because team selection is limited on smaller slates.

But what types of teammates do we see paired together? Is it always two low-dollar value plays? Two studs? One of each? Here's a breakdown of the 172 different teammate combinations in optimal lineups if we look solely at two-man stacks and slates with at least six games. 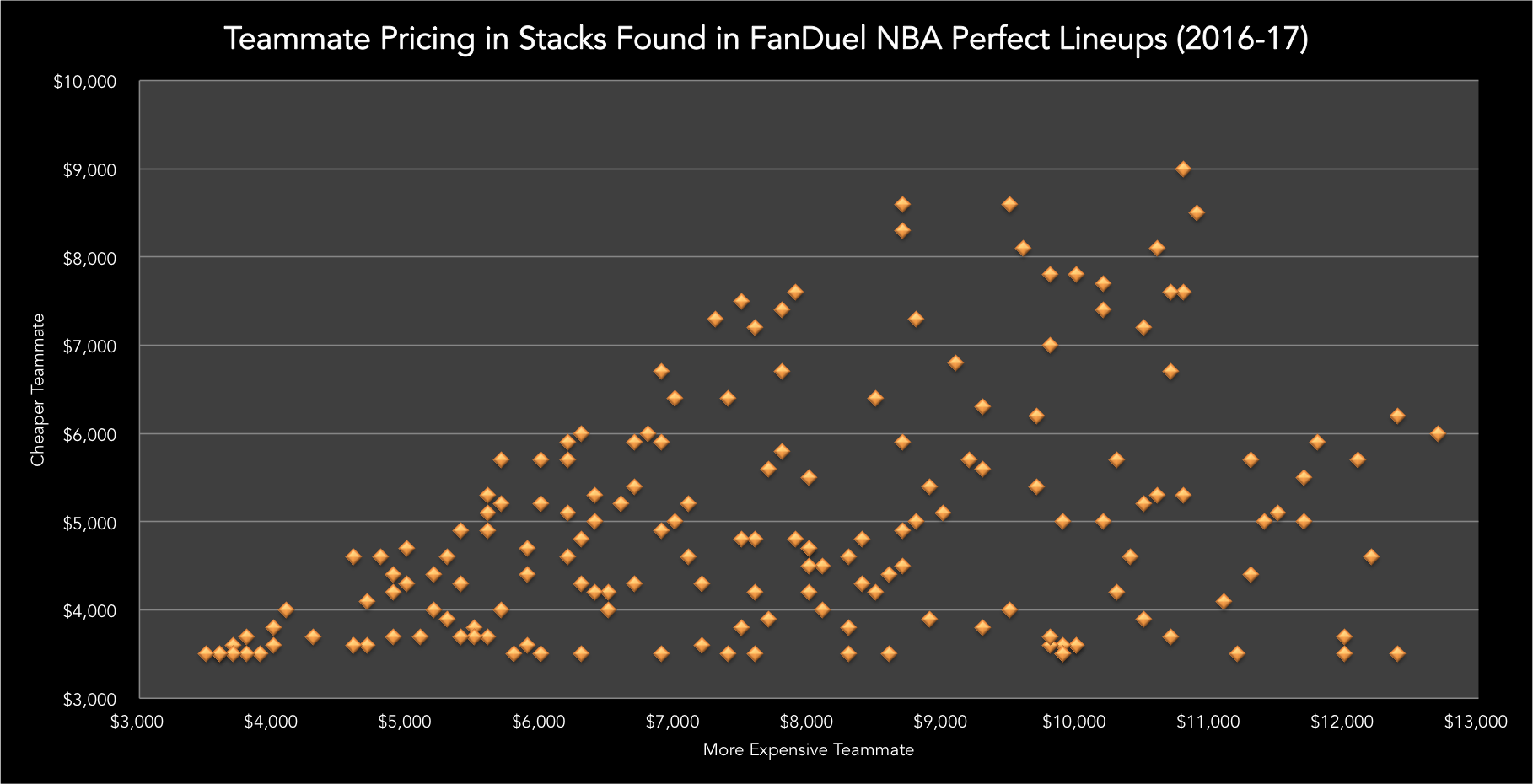 I know, that alone doesn't show us much of anything. So what are the takeaways?

However, the double punt play with two options at or below $4,000 made the cut just 10 times (5.8%). That suggests that if minutes are opening up, it's more likely that the players priced a little higher than the minimum ($3,500) and closer to at least $5,000 see a bigger boost than just the bottom-of-the-barrel punt plays. Too many low-volume, low-upside options cap your ceiling too much to create a flawless lineup.

That doesn't mean you can't have multiple low-dollar players in your lineups (more on that later), but it does suggest that too many cheap options from the same team can cap your upside.

So, these stacks tend to include at least one value play (102 had at least one teammate at or below $5,000; 61.0%), but loading up on punt plays from the same team probably isn't the right approach when on-court opportunity opens up.

Does slate size matter for trends in the optimal lineups? Let's dig into it. For us, we'll call a short slate one with six or fewer games (there were 62 of these in the 2016-17 season).

Here is the breakdown of those 62 slates position-by-position. For example, "PG1" refers to the higher-priced point guard in the lineup rather than the point guard with the best value (fantasy points per $1,000) or fantasy point total.

Spoiler alert, the PG1 position had the highest average salary on optimal lineups for short slates, large slates (seven or more games), and on all slates in the 2016-17 season.

On a similar note, the PG2 had the highest average salary of the secondary positions, with an average salary just shy of $5,800. The SF2 and PF2 just cleared $5,100, and the SG2 was the cheapest of the nine positions -- but it also offered, basically, the most value, just trailing the PF2.

Finding a high-scoring, low-priced shooting guard and power forward on a short slate was also something evident in 2015-16's perfect lineups.

Of course, a big part of this analysis is just where players are generally priced. For example, small forwards tend to be priced at the extremes (your studs such as LeBron James and Kevin Durant are well above $10,000 and a significant portion of options are priced below $6,000). Paying up for two in one night on a short slate might not even be possible.

Still, the perfect lineup trends suggest spending up for point guards regardless of slate size.

Is it the same thing on larger slates (the 100 with at least seven games)?

The average prices rank almost exactly the same as they did on the shorter slates aside from the fact that the SG1 jumped from fifth in average price to second. Then things trickled down from there in a similar fashion.

Of course, anyone who played DFS on FanDuel last year could tell you that aside from James Harden and Giannis Antetokounmpo, few shooting guards ever really got up near $10,000 for an extended period of time.

Is "stars and scrubs" or "studs and duds" a viable way to unlock your lineup's true ceiling?

Here's how things look if we bucket players into either category. We'll call a stud as someone at least $9,000 and a scrub as $4,500 or below.

By far, the most common makeup of the 61 short-slate optimals included multiple studs and multiple duds. The second-most common was on star and multiple scrubs. Basically, you couldn't make an optimal lineup without a value play, which makes a lot of sense when we need to scrape out every ounce of value possible to build a flawless lineup.

That carries over to the larger slates as well.

With 100 large slates to examine, we can easily see that 68% of the optimal lineups contained at least two value plays at or below $4,500, most often coming alongside two or more stars (44.0%).

Value is paramount in optimal lineups. It's pretty obvious, and that's nothing groundbreaking. But being able to see how the perfect lineup trends from 2015-16 lined up with the 2016-17 season at least means that we can feel better and better with the general, overarching trends from these flawless lineups.

Don't ever think that the pricing is so on point that you are losing out by leaving some cap on the table. It's a tough thing to get used to, but you don't need to zero-out your account.

Stacks are firmly in play in NBA DFS even when trying to unlock the optimal amount of upside and production within a lineup, though fuller three- and four-man stacks aren't likely to be the nuts on a given night.

Finding the value plays that allow you to pay up for the studs who don't even need to exceed value is probably step one for your tournament lineups. Spending down at one of the shooting guard, small forward, and power forward positions align most with the optimal trends from the past NBA season.