Paul Pierce Has Been Really Good, But Not Great During His NBA Career

We knew it was coming. Before the beginning of the 2016-17 NBA season, Paul Pierce wrote a piece in The Players' Tribune announcing that this -- his 19th NBA season -- would be his last.

Not long thereafter, Pierce said he would retire as a member of the Boston Celtics. That shouldn't come as much of a surprise after playing 15 seasons and winning one NBA title in his tenure with the franchise that drafted him nearly 20 years ago.

It's appropriate then that Pierce's number 34 will be retired by the Celtics at some point in the future. After all, he ends his playing career as the team's record-holder for made three-pointers, free throws and steals. Pierce is Boston's second-leading scorer, trailing only John Havlicek.

Yesterday, LeBron James stated that Pierce's next stop is the Hall of Fame. According to Basketball Reference's Hall of Fame Probability, at 99.74%, Pierce is a near-lock to reach that final destination, but -- as some have said -- is Pierce a first-ballot Hall of Famer?

In the summer of 1998, Pierce was selected with the 10th overall pick in the NBA Draft. In the previous five picks, Vince Carter and Dirk Nowitzki -- now the only active players from their draft class -- went off the board at picks 5 and 9, respectively.

How have the trio's careers measured up against one another?

Our nERD metric -- a player ranking that measures a player's total contributions over the course of a season, based on efficiency -- can do that for us. By combining the aspects of volume and efficiency, this allows us to gather an estimated number of wins a player would add to a league-average team as one of their starters.

This chart shows how the nERD scores of Pierce, Nowitzki and Carter have fluctuated throughout their careers, from their rookie season to where they are now. 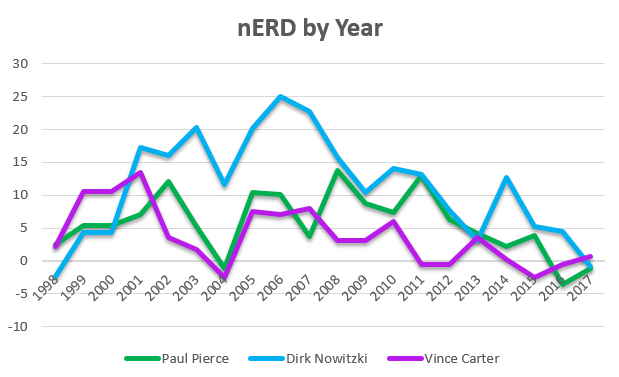 Nowitzki has been the best, and by a sizable margin. Meanwhile, a marginal difference exists between Pierce and Carter, but Pierce would rate as the second player in the group -- especially when considering his single championship to Carter's zero.

What about Pierce's position in comparison to other active players at the top of Basketball Reference's win shares leaderboard?

There, he ranks fourth behind only three other players, including Nowitzki. But, using nERD (basically a better version of win shares with its emphasis on efficiency), The Truth falls to fifth among the top six players in terms of accumulated win shares.

By nERD per year and nERD per game, Pierce was a fairly inefficient player, despite his long and successful career. Only once (2001-02) did he rank within the NBA's top-five players in terms of regular season win shares, and on just three other occasions did he find himself inside the top 10, thanks to greats like Shaquille O'Neal, Tim Duncan and Nowitzki.

Class of the Postseason

A lot of people think playoffs when they think number 34 in green, though. Does the narrative change then?

Among all active players, Pierce is fifth with 170 career playoff games (behind Tony Parker, LeBron James, Manu Ginobili and Dwyane Wade). He's also fifth with a total of 16.3 win shares in 14 postseasons between the Celtics, Wizards, Nets and Clippers.

On the contrary, Pierce is 29th on the active list in playoff win shares per 48 minutes. At a clip of .1256 per 48, he's just ahead of Al Horford and Deron Williams, and he trails George Hill by a very small margin.

As for his place among longer-tenured players, he falls between Nene Hilario and Rajon Rondo and just ahead of Carter.

As has been the case throughout his entire career, the bar for greatness has been set much higher. From Michael Jordan, Tim Duncan and Shaquille O'Neal, to Kobe Bryant and now LeBron James, there has always been a player or two above and beyond Pierce's level of play.

At the end of the day, Pierce is a Hall of Famer, based on volume, and longevity, along with individual and team success. Is he a first-ballot Hall of Famer? Probably not -- especially if you're stingy about who you classify as that caliber of player.

All things considered, Pierce has been a really, really good NBA player for a long time -- not everyone can say as much.