The NASCAR offseason isn't all that long. When it ends in November, there's football to keep our weekends occupied. Football is kind enough to stick around to distract us all the way up until the final weekend before the calendar flips to a new year of racing.

That doesn't cheapen the start of the season a single bit. The anticipation is high, we're ready to start pumping out daily fantasy lineups, and we get to see all of it at the World Center of Racing.

Hold onto your butts, everybody. It's time to boogie once again.

This weekend, the NASCAR Cup Series begins the 2020 season with the Busch Clash, an exhibition race that includes only the top names in the sport for a shootout-style competition. Even with a smaller field lined up, we're still blessed with daily fantasy to get us warmed back up before the Duels next Thursday and the Daytona 500 soon after that.

Because the Clash is a unique format, it's going to require a unique strategy for daily fantasy. That's what we're going to focus on today: just the strategy element. We'll have a driver-centric DFS primer out later in the week once the qualifying order has been set, but until then, how should we be building lineups to kick off the new season? Let's check it out.

There are two things you need to know about the Clash that are going to mold our strategies for Sunday's race:

1. The starting order is completely random.

Qualifying and race length are the main cogs that push us one way or another from a strategy perspective in DFS. Both are unique here, and we've got to account for that when filling out lineups.

When there are fewer points available for laps led, it increases the importance of points scored in other categories. The other options are finishing position and place differential, neither of which fluctuates based on the length of the race.

Place differential gets a unique twist for this race, as well. Because there are only 18 cars entered, the most points you can get for place differential is 8.5 (as you get 0.5 points for every position better than where you started the race). Those points -- even if they are also limited -- are super valuable. More on that in a bit. But finishing points are going to drive the lion's share of how things play out.

On FanDuel, a driver earns 43 points for a win, 40 points for second, 38 points for third, and then it descends by one point per position from there on out. So each driver will earn between 43 and 23 points in this category (an 18th-place finish is worth 23 points). It means the margins here are thin, as well. But those 43 points for a win are ginormous in such a low-scoring event.

Finding drivers who will finish well is paramount. That's super obvious, and you're probably ready to chuck your device out a window upon reading that. Picking good drivers is good. So that's your first directive for the event.

But you can at least position yourself well to profit just by targeting drivers starting further back.

On Saturday night, each team will draw a starting position for the race at random. The fastest car could very well wind up starting 18th, and vice versa.

Next week when we discuss the Duels, that will not be the case. The starting order for those is set by a single-car qualifying run, meaning -- for the most part -- the fastest cars will be starting at the front. That's not happening here, and it opens the door for us to snatch up easy place-differential points.

Here's a look at the FanDuel points scored by each driver in the past four Clashes based on where they started the race. The field size differs by year, though this will be the fourth straight year with 20 or fewer drivers. Last year's race was shortened by rain, so scores there were adjusted to reflect what they would have looked like in a 75-lap event. Most of the top-end scores came from drivers starting in the back. 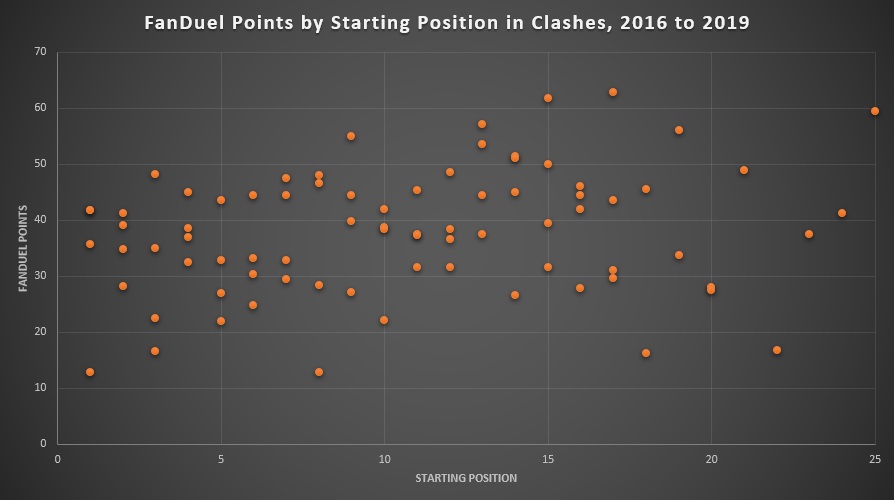 In those four races, 10 drivers have managed to score 50 or more FanDuel points. Every single one of them started ninth or lower.

If we loosen things up and look at the drivers to score 45 or more FanDuel points, here's the starting range for that group.

There is a clear incentive to pick drivers starting in the back who can get you place-differential points, and you aren't necessarily using worse drivers by doing so thanks to the randomness of qualifying. We should have a heavy preference for drivers who wind up starting further back.

One of the key bonuses of stacking the back is you don't need to be as good at picking who will win the race. Of those 20 drivers who scored at least 45 points, five actually finished outside the top five. They had enough juice from place-differential alone to pay off.

That's not to say we should completely disregard trying to identify drivers who will perform well. The top-three finishers in each of the four races in our sample topped 45 FanDuel points, so if you want the five highest-scoring drivers in your lineup, you're going to have to pick drivers who can finish well. Our margin for error is just bigger when the drivers start in the back.

Our general mindset going into the race should be that drivers starting in the back will have a scoring advantage over those starting at the front. Our heaviest exposures, therefore, should be to those who get a bad draw for qualifying. That does not mean all five slots must be drivers starting outside the top 10.

This table shows the starting position of the five highest-scoring drivers from the past four Clash races.

The 2016 race was an outlier because there were more cars in the field, giving us a better selection of drivers further back and more upside for them via place-differential. But in each of the other three races, at least one driver starting in the top 10 was among the top-five scorers.

Because of this, nobody in the field is "off limits," even if they're starting on the pole. If they win and run all 75 laps, that's 50.5 FanDuel points without even counting points for laps led. That will be among the five highest totals in the race, and you'll want them on your roster.

You'll just want to be careful about having too many drivers at the front in a single lineup. After all, the finishing points do dip quickly after first place, meaning it'll be harder for someone else to pay off while also starting up front. In moderation, drivers at the front are fine if you think they can win; we just want to make sure we're not limiting our upside by going too hard at that group.

One way to view this is a method we discussed plenty last year: making assumptions. In each tournament lineup, you should have a driver you think will win the race. No matter where they're starting, you should lock them in. Then, you plug in drivers who can score well without winning. Usually, those drivers will be starting further back.

Your assumed winner could very well be one of those in the back of the pack, so your optimal tournament lineup may include five drivers who all got bad draws. But you should at least feel the freedom to pluck one driver near the front per tournament lineup if they have the ability to win.

For cash games (if you decide to play them in what should be a pretty volatile event), you'll want to stick pretty much in the back. The assumption game is far less viable there, and drivers in the back will have much better floor and median outcomes than those up front. It's moreso for tournaments where we can get a little friskier.

Because our focus will be narrow in targeting drivers further back, there's a good chance your optimal builds will leave a lot of salary on the table. That's a desirable lineup characteristic for this event.

When you're rostering 5 of 18 drivers per lineup on FanDuel, there's naturally going to be a lot of overlap in rosters. Therefore, even if you wind up having the highest-scoring lineup in the field, there are good odds you'll tie with others and have to split the pot. If your lineup is unique, you can get it all to yourself.

An easy way to differentiate is by leaving salary on the table -- potentially a bunch of it. The winner of last year's race -- Jimmie Johnson -- came with a salary of just $8,200. We're going to see value plays finish well in the race, so you're not going to need the full $50,000 to fill out an elite lineup. If you want to give your lineup its best upside to take down the top prize by itself, you'll need to make it unique, and keeping things well beneath the salary cap is a clear path to doing so.

The Clash is going to be a volatile event with such a small field on a high-variance track. You're going to need some things to break in your favor in order to take down the top prize. However, by deploying some of the strategies above -- stacking the back, picking assumed winners, and leaving salary on the table -- you can at least put yourself in position to pounce. In what figures to be a wild race, that's really all you can do, and it seems necessary if you want to maximize each lineup's earning potential.