This week, the Monster Energy NASCAR Cup Series is hitting a road course as they head to Sonoma Raceway for the Toyota/Save Mart 350. What do we need to know about the track before filling out our NASCAR DFS lineups? Let's check it out.

For the first time in 2019, the Monster Energy NASCAR Cup Series is about to turn right. Not only is that a big change for them, but we're going to have to re-calibrate for daily fantasy, as well.

Sonoma Raceway is one of three road courses that the Cup Series will visit this year, and each trip presents us with a unique challenge. It's also changing things up from what we've seen in the past.

For 2019, NASCAR will return to running "The Carousel" of the track, lengthening one circuit to 2.52 miles from the 1.99 miles it has been for the past two decades.

Because of this, the race is being shortened to just 90 laps, tied with Watkins Glen for the shortest race of the season. That leaves just 9.0 points for laps led on FanDuel, so if you're hunting for upside in that department, you'll be sorely disappointed.

Even when Sonoma was a longer race in the past, it was still hard to find upside via laps led. Being a road course with stage racing allows teams to deploy a variety of pit strategies in order to get a leg up on the field. Even if one car is definitely the fastest in the pack, there's no guarantee they'll be leading the race because they could have a different fuel strategy than other drivers.

In the past four Sonoma races, only one driver has led more than 45 laps, and only five have led more than 25. You'll definitely take those points, but the easiest path to upside is via place differential, not laps led.

Thankfully, finding those drivers who start better than they finish isn't as difficult here as it is in other spots. The track includes multiple passing zones, and pit strategy gives teams that start further back the ability to make up spots in a hurry.

Here's a look at the starting ranges of drivers to net top-10 and top-five finishes at the past four Sonoma races.

Starting up front doesn't hurt, but it's certainly not required to net a solid finish.

Combining this with the earlier discussion around laps led should make our strategies for this weekend pretty clear. Let's expand a bit on that and discuss roster construction for Sunday's race.

There may not be two tracks more different on the Cup Series circuit than Talladega and Sonoma. One is fast, wide-open, and encourages three-wide racing while the other requires precision and patience. But the two are pretty similar for DFS.

The reason we can deploy similar strategies at Sonoma as we do for pack racing is that both events are going to come with capped upside for drivers at the front. It's hard for one driver to monopolize all the laps led, and there aren't a ton of laps to lead to begin with. That forces us to prioritize finding upside via drivers starting further back.

The other way to score a bunch of points -- and this may come as a massive shock, so brace yourselves -- is by winning the race. Stunner, I know. The highest-scoring driver in each of the past four Sonoma races has been the guy who claimed the checkered flag. So if you're not coming from the back, you'd better cross the line first if you want to score in DFS.

We can see this by looking back at the overall scoring distribution of the past four Sonoma races. Keep in mind that all of these races were about 20 laps longer than what we'll have on Sunday, meaning scores will be even lower than they were for this stretch. Additionally, the 2015 race was before NASCAR capped the field at 40 drivers. To make that race fit with FanDuel's scoring rules, any driver starting or finishing worse than 40th had their position rounded to be exactly 40th.

Here's the FanDuel output by starting position in that four-race span. 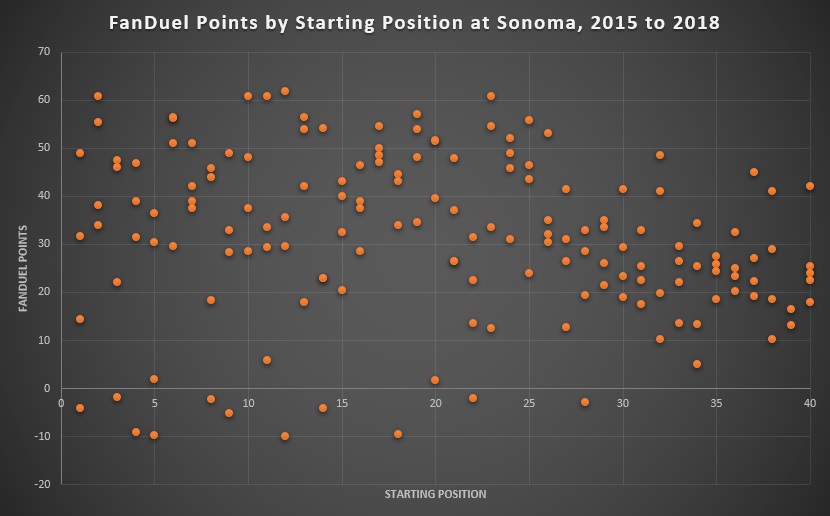 There's a definite fall-off after drivers starting 25th once you get to drivers who are in less competitive equipment. But the range between 10th and 25th tends to be a fruitful one for DFS.

In this four-race sample, 23 drivers have scored at least 50 FanDuel points. Four of those drivers were the ones who won the race, but here's the starting ranges for that group as a whole.

Of the nine drivers who started in the top 12 and scored at least 50 FanDuel points, four won the race. That means that it's hard to get a big point total from up front unless you win the race, which gives us a pretty clear edict for roster construction.

Just like we do in Talladega and Daytona, we want to play the assumption game for tournaments. The "assumption game" is where in each lineup, you make an assumption about who will win the race. It doesn't matter where that driver starts the race; if they win, they will score well for DFS, and you should use them. You start your lineup with the driver you think will win.

From there, you build the rest of your lineup assuming that these drivers will not win the race. It forces you to ask, "Can this driver score well without getting the 43 points for a win?" If that driver is starting up front and not your assumed winner, the answer is more likely to be no than yes. As such, you should be less inclined to plug that driver into your lineup.

You don't have to completely omit drivers at the front if they're not your assumed winner. If they're cheap and post good speed in practice, they don't need to score as many points to pay off for DFS, which means you should be more willing to use them despite a sub-ideal starting spot. Additionally, laps led do still count, even if they're less abundant, and most of the drivers who scored well without winning had at least a bit of a bump in that department. It's moreso to say your baseline roster construction should revolve around an assumed winner alongside drivers who can get place-differential points.

This assumption-game strategy would have paid off well during last year's race at Sonoma. Martin Truex Jr. won the race, netting him a spot in the perfect lineup, and the others all came from further back.

You don't need to go all the way to the back to find good plays here. As long as drivers are starting somewhere in the middle of the pack, they should carry enough upside to net you a positive day for DFS.

As far as identifying which drivers will do well, practice times definitely matter. Drafting won't be a factor, which will prevent the lap times in practice from being tainted. Even with just single-lap data to look at, we can still gain some value here.

But we also want to make sure we account for current form, potentially even moreso than track history.

Prior to last year's race in Sonoma, Aric Almirola's best finish at the track was 14th in 2015. Based on that, you might not have wanted to plug him in even though he was starting in our target range in 24th spot.

But 2018 was also the first time Almirola had raced with Stewart-Haas Racing at the track, giving him a major equipment upgrade over what he had in the past. With that quality backing, Almirola finished eighth and wound up in the perfect lineup. Current form matters, even at unique tracks, and we need to give that weight when deciding which drivers to trust.

By factoring in practice times, current form, and a dash of track history, you should be able to identify which drivers will be able to make their way through the field. Passing here isn't overly difficult, meaning if a car is fast enough, it can generate a good finish from pretty much anywhere. You just have to ensure they've got that upside by looking at the data we discussed above.

Those same factors will help you identify whom you want to focus on when selecting a winner for the race, as well. Current form will matter there, too, so the top-end drivers from the early parts of 2019 figure to be in contention once again on Sunday. Don't let the right-hand turns force you to overlook a team that has shown massive strength of late.

Sonoma is far from being a pack-racing track like Daytona or Talladega, and it's certainly a unique beast for DFS. But it still comes with familiarity. We can use the same strategy we use at those other tracks here, making assumptions and then looking for place-differential points after that. And there's also the familiarity with targeting drivers who have been pumping out good finishes this year. So even though things are different for this Sunday, we should still feel pretty secure with our strategy, knowing that we're not entering the race completely in the dark about what may go down.