Jim Sannes  —  @JimSannes Mar 26th, 2019
Share on Facebook Share on Twitter
With two races in the new aero package in the books, what can we learn from them, and what do they mean for NASCAR DFS strategies this weekend at Texas?

This week, the Monster Energy NASCAR Cup Series gets back to the speedways by going to Texas for the O'Reilly Auto Parts 500. What do we need to know about the track before filling out our NASCAR DFS lineups? Let's check it out.

For the third time this season, the Monster Energy NASCAR Cup Series will be using its full new aero package, this time at Texas Motor Speedway. We've got to look back at those first two races to see what we can learn heading into Sunday's race.

At both Fontana and Las Vegas, one thing stood out: drivers were still able to dominate the action if their cars were good enough. Kyle Busch got a pit-road speeding penalty in Fontana and still led 134 of 200 laps en route to victory. In Las Vegas, both Joey Logano and Kevin Harvick led more than 85 of 267 laps, which is a pretty decent boost for fantasy.

That's key for this weekend. Texas' race is scheduled to run 334 laps, the most of any race to run this package this year. Laps led are still going to play a factor even with the new package increasing green-flag passes.

That elevated number of laps has allowed drivers to rack up difference-making points in that department in past races at Texas. Over the past six races (since fields were trimmed to 40 drivers), seven different drivers have led 100 laps in a race, including at least one in each. The spring 2016 race had two drivers top that mark, and you'd want those 10-point bumps on FanDuel.

Based on what we've seen the first two races with this package, we can likely assume that either one or two drivers will get sizable bumps to their FanDuel scores via laps led. The one thing that could change is where the drivers who do so start the race.

Of those seven drivers to lead at least 100 laps, only two started outside the first two rows, and the deepest starter came from eighth spot. If you wanted to lead a bunch of laps, you basically had to start at the front.

But with the way that restarts have worked so far in 2019, a driver who starts in sixth could be at the front before the pack hits the back stretch. Busch started fourth in Fontana, but Logano came from 10th spot to lead 86 laps and win in Vegas.

The ability to lead laps from deeper in the field goes beyond Logano's performance, too. Of the nine drivers who have led double-digit laps at Las Vegas and Fontana, only three started within the top nine spots. Kurt Busch led 23 laps from the 28th position in Las Vegas, further illustrating that passing has been made easier by the new package.

While we definitely need to shoot to find laps led, the new rules package may give us more flexibility in where we search for them. This means you can just pick the car you think is strongest over the weekend and plug them in as the car you're counting on for dominator points. It'll be easier to get them from the front, but we don't need to exclude drivers from this equation just because they may be starting around 10th or so.

Although drafting is now a factor, we can still use practice times as a way to identify which drivers have the strongest cars in a given weekend. In Fontana, Busch was in the top six in 10-lap averages for both Saturday practices, and he led 134 laps. Brad Keselowski led the second-most laps, and he was first in 10-lap averages in the second session and third in the final session.

If there is a car that stands out in practice -- after also sprinkling in thoughts on current form and track history -- you should use them in your lineup no matter where they start. If there is another car that also seems primed to run up front, the number of laps in this race allows you to use them, as well, regardless of starting position.

We know definitively that we need to get laps led, and the new rules package doesn't change that. But it has definitely increased our ability to find place-differential points. Let's dive in deeper to that aspect to see how it impacts our roster construction.

One method we have for figuring out how we should build our rosters is looking at perfect lineups from Las Vegas and Fontana. The increased number of laps here does change things -- and we'll talk about the implications of that in a second -- but here's what the perfect lineup looked like for Las Vegas.

And here's the same for Fontana.

In both lineups, there was only one driver who led more than 25 laps, and those were the two drivers who won each respective race. Six of the 10 drivers started 18th or lower, which is also noteworthy.

The laps-led portion of that discussion seems likely to change in Texas. There are 6.7 more points available for laps led on FanDuel than there were in Las Vegas and 13.4 more than in Fontana. This makes it seem likely that there will be two drivers who lead a decent number of laps and crack the perfect lineup this weekend, and we should be building our lineups as if that will happen. But for the other three slots, we really do want to search for drivers who will move up throughout the race.

In last year's race at Texas, we saw a modified version of this plan come through in the perfect lineup. Two drivers -- Kevin Harvick and Ryan Blaney -- started at the front, got a bump from laps led, and made the perfect lineup. The other three started outside the top 10 and provided salary relief while netting some place-differential points.

But those other three drivers all started between 11th and 17th, which is higher in the order than we've seen at tracks so far this year. So where is the ideal spot to find these place-differential points?

The correct answer -- as always -- is that it depends on qualifying. It's entirely possible qualifying will be highly predictive this week, sapping us of quality drivers starting further back who will be able to finish well. We just haven't had that limitation at other tracks using this package this year.

The chart below shows the distribution of FanDuel points at Las Vegas and Fontana based on where drivers started. Because the two races had different lengths, points for laps completed were omitted. You definitely still see the spike for lap-leaders at the front, but there's another healthy spike toward the middle of the pack. 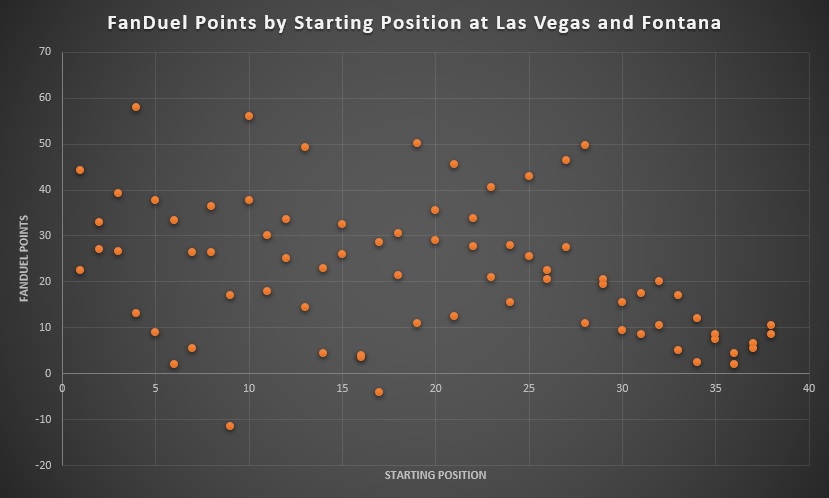 Of the 10 highest point totals in this span, eight came from drivers who started 10th or lower with six coming from 19th or lower. Place-differential points have been flowing.

And it's not as if all of those big outputs have come from top-level drivers who qualified poorly. Mid-level drivers have been able to work their way through the pack, as well, giving us a realistic chance at finding drivers who will make up spots without going over the salary cap.

Again, this has also been reflected in perfect lineups with six of 10 drivers from Fontana and Vegas winding up in the ideal roster after starting 18th or lower. There seems to be a formula developing, and it's one we can carry with us into Texas.

Because drivers have still been able to jump out front and dominate races, we need to find our lap-leaders first. We should likely find two cars that are strong in practice that we think will post a good finish and have a chance to lead the pack around the track for a while. With 33.4 points available for laps led, we need to make this a priority.

After that, we can turn our attention more to the middle tier of the field with drivers starting between 15th and 30th. That range has been racking up a ton of points in 2019, and Texas doesn't figure to change that. If drivers qualify lower than that range -- for one reason or another -- but show some speed in practice, we can gobble them up, as well, but the most likely scenario is that we're hunting in that middle tier.

That tier is in play even for drivers with lower salaries. As you saw above, Matt DiBenedetto started 24th and made the perfect lineup at Fontana after finishing 18th. Chris Buescher started 27th and finished 18th in Las Vegas, making him another driver who could contribute to a successful lineup.

What further boosts the appeal of drivers in the DiBenedetto and Buescher tier is that they managed to post decent finishes in races that didn't feature many crashes. When crashes occur, drivers running at the back all move up a spot, boosting their finishing totals and place differential. Buescher and DiBenedetto didn't get that boost, and they still had solid days.

Based on what we've seen from the package so far, we shouldn't expect Texas to be a demolition derby (which it was during last year's spring race). In fact, we should expect it to be a clean race. But those drivers showed they don't need that to be decent options. If there is a bit extra chaos -- which is definitely possible with the hectic restarts -- those lower-salaried drivers would benefit even more.

In all, it seems like we can use what we've seen at Las Vegas and Fontana as a blueprint for rosters before making slight tweaks to account for this weekend's event. We should continue to be able to find solid place-differential options for our value drivers, but we'll need to put a heavier emphasis on getting drivers who will lead laps due to the length of Sunday's event. That's the formula that has worked so far in races with this package, and we should keep leaning on it until we get a reason not to.