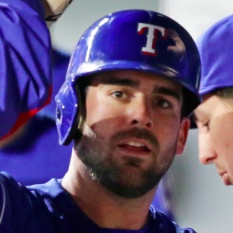 Texas' Brett Nicholas out of the lineup against Oakland

Texas Rangers catcher Brett Nicholas is out of the starting lineup for Thursday's home game against the Oakland Athletics.

It's a routine day off for Nicholas, and A.J. Jimenez will spell him behind the dish tonight.