Stone Garrett leading off for Arizona on Tuesday

Arizona Diamondbacks outfielder Stone Garrett is in the starting lineup for Tuesday's game against the Milwaukee Brewers.

Garrett will start at designated hitter on Tuesday and bat first versus left-hander Eric Lauer and the Brewers. Pavin Smith returns to the bench.

numberFire's models project Garrett for 10.2 FanDuel points on Tuesday. His salary is $2,700. 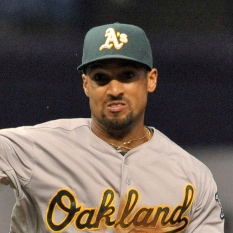