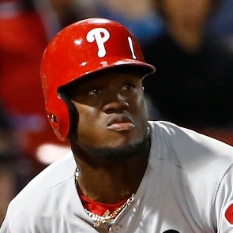 Odubel Herrera leading off for Phillies on Sunday

Philadelphia Phillies outfielder Odubel Herrera is in the starting lineup for Sunday's game against the Pittsburgh Pirates.

Herrera will start in center field on Sunday and bat first versus right-hander Max Kranick and the Pirates. Matt Vierling moves to the bench.

numberFire's models project Herrera for 10.8 FanDuel points on Sunday. His salary is $2,700.