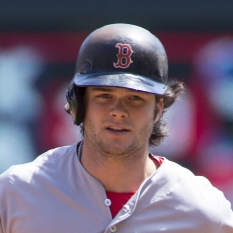 Boston Red Sox outfielder Andrew Benintendi was ejected from Tuesday's game in the fifth inning for arguing balls and strikes.

Benintendi took issue with a strike call in his third at-bat of the night and was tossed. He was replaced in the lineup and field by Sam Travis.

Benintendi finished 0-for-2 with a walk and a run scored on Tuesday.