At the beginning of this season, if I would've told you the Pittsburgh Pirates would be the third-best hitting team in the league through 56 games, you probably would've said the following:

And if I told you only two of those things are true -- knowing that Kang is returning from a gruesome knee injury -- I'd bet all the Primanti's you can eat that you'd pick the last two. But, as it turns out, you'd be stuffing your face with free fry-filled sandwiches right about now because McCutchen is off to a slow start once again.

It's true that over his career McCutchen has been a habitual slow starter, as evidenced by his career wOBA splits.

As his wOBA suggests, throughout his six-plus years in the bigs, it hasn't been unusual to see McCutchen struggle to get it going in the months of March and April. Then, just like that, he turns it on in May and June all the way through August.

And when things get tough at the end of the regular season grind, and even further into the playoffs, McCutchen has proven to be 40 percentage points better than his early season self.

But, this year sticks out for a reason.

As you can see, it's much more than March and April.

Though many players around the league dream about getting to a .345 wOBA -- even if it was for a month's time -- that just doesn't cut it for a player of McCutchen's abilities. According to FanGraphs, his wOBA for the month of May is nearly 50 points below his career mark and more than 70 points below where he was last year after a miserable March and April.

On a positive note, Cutch seemed to be trending in the right direction, but June hasn't shown any promise, at least through four games. In those four games, in 16 plate appearances, McCutchen has accounted for two hits -- both singles -- and just two walks to five strikeouts.

At what point does a slow start become something more? For me, it's here.

So, if it's not just a phase, why is McCutchen struggling with the bat?

At the start of this season, it was a big story that McCutchen was moving to second in the batting order. After all, great hitters like Manny Machado and Josh Donaldson have seen a lot of success in that role with their respective clubs.

Little did we know that this change would negatively affect the four-time Silver Slugger.

Well, for starters, Cutch has been pretty unlucky, for his standards. His current batting average on balls in play (BABIP) of .300 is pretty average. Cutch, however, is used to a career mark of .334.

But, as much as I'd like to chalk it all up to luck, it's really not. His hard hit rate of 34.6% is a five-year low and 2.6% below his career average, which tells us that McCutchen has to start creating his own luck, which he's failed to do with the approach he's been taking as of late.

Swinging For the Fences

A spot in the batting order doesn't stand alone as the only reason for Cutch's 2016 troubles, though. That, combined with a different approach, has been his undoing.

The point of getting McCutchen up, at the worst, with one out and nobody on was for him to hit for average and get on base with frequency. That hasn't been the case.

In the 136 plate appearances in which Cutch has had no one on, he's earned a wOBA of .311 with 15 singles to 7 home runs while he's struck out at a rate of nearly 3 strikeouts to every walk. It's clear that he's looking longball the majority of the time in these instances. 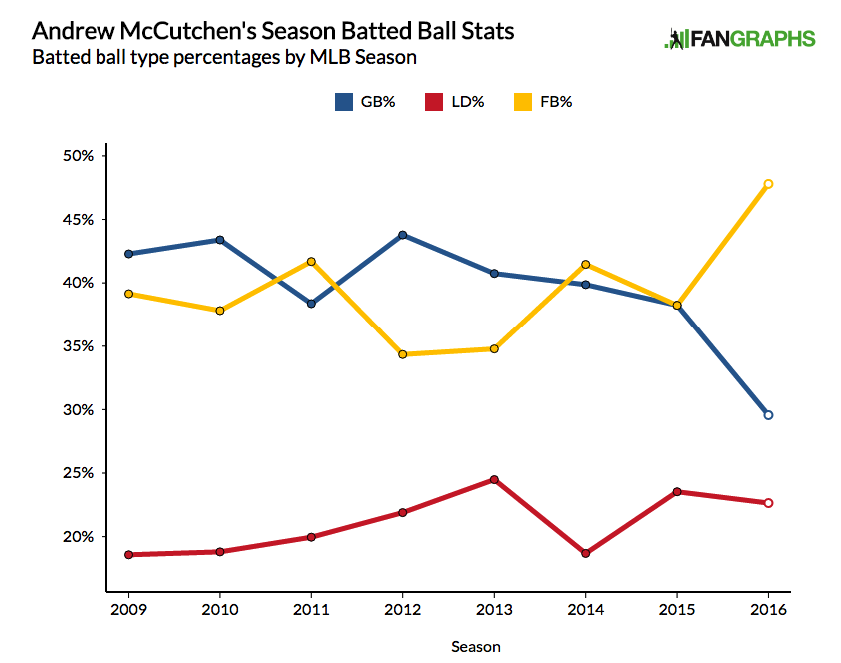 This graph, courtesy of FanGraphs, indicates the change in McCutchen's batted-ball percentage over the course of his career.

His line drive percentage is down a tad from last season but the biggest difference is the 10% jump in fly ball rate and nearly 9% drop in ground ball rate from 2015 to present. McCutchen's current Fly Ball Rate is a career high by more than 6 percentage points, and his Ground Ball Rate of 29.6% is the lowest of his career by 8.6 percentage points.

I don't know if it's added pressure or an expectation derived from his new role in the batting order, but either way, McCutchen is looking to hit the long ball, not to get on base.

So, it's clear that the two-spot isn't working for Clint Hurdle's star centerfielder, meaning it's time to make some changes.

He needs to move McCutchen back to the three-hole ASAP -- and there are two reasons why. First and foremost, in this capacity, he has a wOBA of .391. It's what he's become accustomed to, and it's the role he's thrived in throughout his career. So, if it isn't broke don't fix it.

The other reason is a little more complicated, because I know the rationale for the shift. Last year, McCutchen had the second-most at-bats in the NL with two outs and no one on base. Oh, and it doesn't hurt that, on average, a player batting second sees 17 more plate appearance than a three-hitter over the course of a season.

I have no problem with seeing more of McCutchen at the plate, but he's still not getting up with people on base.

If his place in the batting order doesn't change, his approach at the plate definitely needs to. If and when either of those occur, the Pirates' offense -- a club ranked third in the Majors in wOBA and second in wRC+ -- could be that much more lethal going forward.